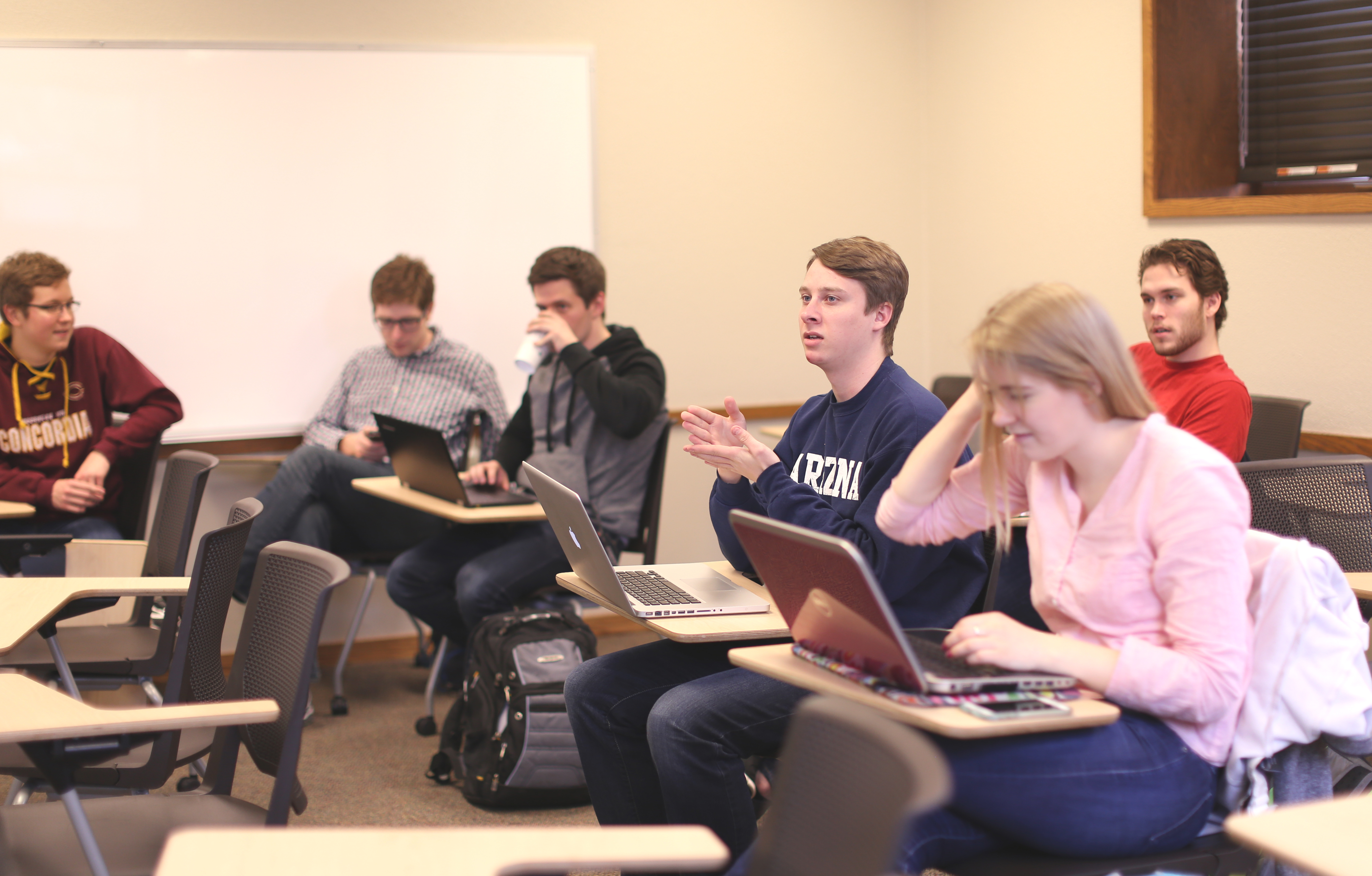 According to Eric Addington, associate vice president for Enrollment and Financial Aid, the projection will benefit the school because the college’s budget will be built on a specific number of future students.

Forecasting enrollment is a complicated process, but junior Phillip Manley explained the essence of it.

“We’re essentially trying to predict how likely a student is to move from one level to the next, so to go from submitting the application, to being admitted, to depositing, to becoming a student,” Manley said. “And then from there … you can get a prediction of what you think the total number [of freshmen] will be for the next year.”

Tom Dukatz said the process can be complicated, but the approach is simple enough.

“If a person submits an application, we can with a high amount of confidence tell if they are going to come here or not,” he said.

According to senior Zach Lipp, the idea of the class came about after last year’s Midwest Undergraduate Data Analytics Competition. Lipp, Dukatz and other peers of the forecasting class are members of the team and have won the last three years of competition. Reber advises the team, and figured a forecasting class would help get people into data analytics.

“We were on the ride back and Tom and I were talking to Dr. Reber, and he kind of casually mentioned ‘What if we had a forecasting course?’ ” Lipp said. “And from there, [Reber] took charge to offer a special-topic forecasting course.”

Lipp said the class was originally a theory-based course. About a month in, the class voted and decided to try to apply their knowledge.

Junior Mark Switajski said that the class wanted to work on a long-term project. They decided to work on forecasting future enrollment numbers for Concordia. Admissions provided the data they needed.

Reber and Addington had previously talked about potentially involving students in a project like this.

“The class was excited about it, and I think it’s been a great experience for them seeing how challenging real data can be to work with,” Reber said. “We’ll spend an entire 50-minute class discussing a single variable.”

Addington said he was impressed by students’ success in some of the data competitions they’ve been participating in.

“[Dr. Reber and I] thought that it might be both fun and practical to see what work we could do with this talented bunch of students,” he said.

He also said he visits the class from time to time to talk about the work and why it’s important; students present some of their findings and ask a lot of good questions.

“The talent and the energy that these students have is pretty infectious and fun to be around,” Addington said.

According to Switajski, the class was given student data from the last two years, but they do not have access to any student names or other identifying data. Some examples of what they are looking at is high school GPA, as well as SAT and ACT scores. The whole class had to sign non-disclosure agreements, which means they are not allowed to talk about the specifics of the data.

He said a big part of the project is data-cleaning. There are values missing, and sometimes inaccurate values in the data they receive.

“Sometimes someone will enter an SAT score for an ACT, and it’s inconsistent,” Switajski said. “The first step is to clean all that up and fill in missing values; make it workable.”

The second thing to be done is to explore the data, and finds trends within it. According to Switajski, the class has found that students with certain attributes are more likely to attend Concordia, or less likely to.

“The second part of the process is modeling, and modeling is where the real art and the math is,” Switajski said. “How do we best predict a student’s likelihood of coming here?”

According to Lipp, they are not yet at the modeling stage.

“Modeling is fitting some function to the information that we have to try to predict a number,” Lipp said.

But though the project is slow-going, Dukatz said the class has gotten an incredible amount of data-cleaning done.

Manley primarily cleans data, and he also outlined the project.

Manley said he has decided to extend the project and work on it next semester as well.

“I think I’m going to be doing it as an independent study,” Manley said. “It’s not finalized yet, if that’s what I’ll be doing or not, but that’s what the plan is.”

He is planning to work on the project by himself, with help from Reber and possibly other math and computer science faculty, he said.

“We hope to have our models built by the end of the year,” Manley said. “My hope is that next semester I’m going to try to build a software for [the project], so people in Admissions can look at any given day what their expected number of students is.”

Manley said he thinks the project can be very beneficial to the college.

“If we can help Admissions with forecasting enrollment, we won’t have as bad budget cuts in the future, because we’d plan better,” Manley said.

According to Manley, the plan is for Concordia to properly apply the forecasting methods for the fall of 2017.