Concordia enrollment rises above the rest 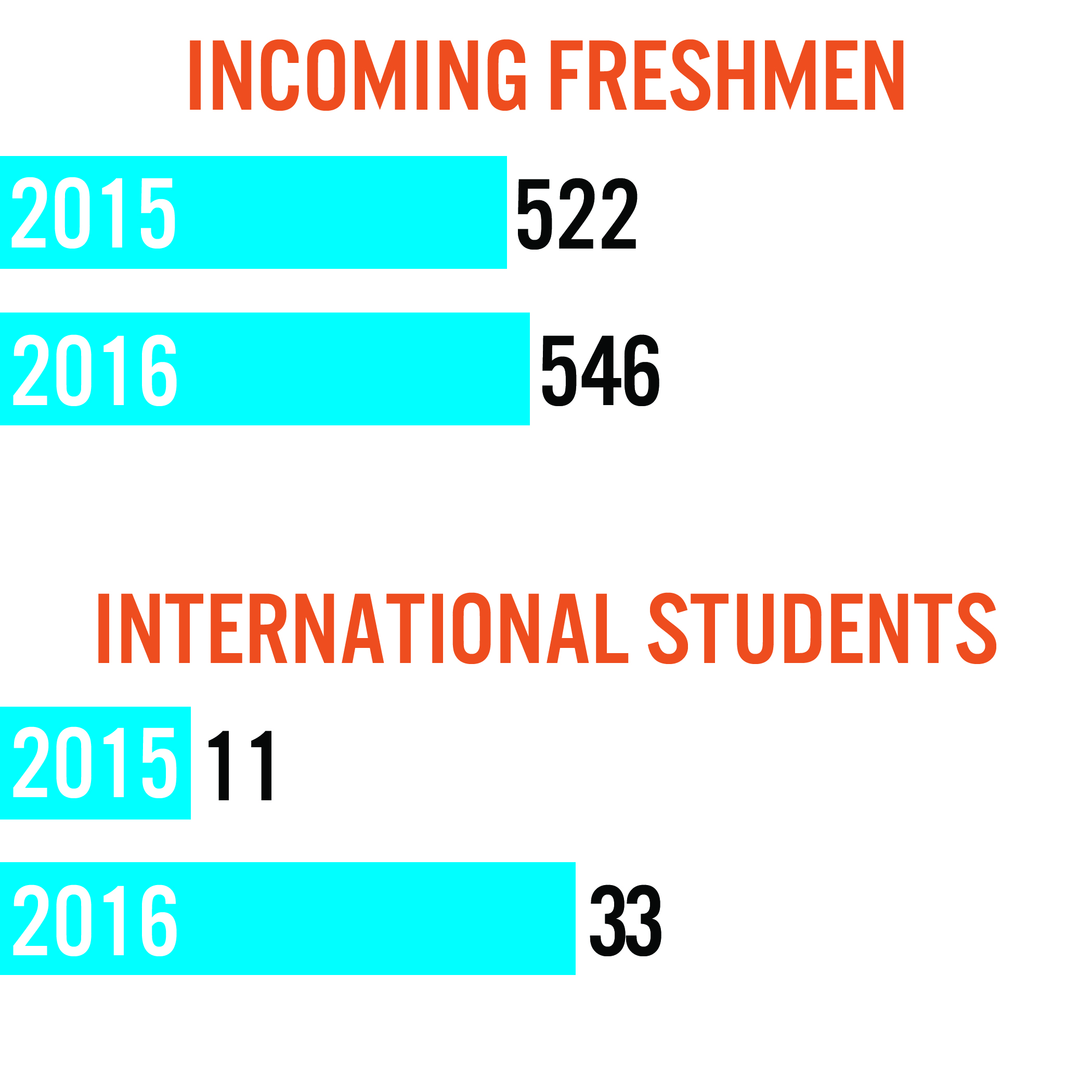 The number of freshmen and international students at Concordia is growing, thanks to new enrollment and recruiting strategies.

This year’s class of freshmen and incoming transfer

According to Karl Stumo, vice president for Enrollment and Marketing at Concordia, the last indicators from the Minnesota Private College Council reflect that overall the enrollment rate at private colleges in the state was flat this year.

“The fact that we’re up a little bit would suggest that we did a little better than the average Minnesota private college sector,” Stumo said. “We worked very hard to express the value of a Concordia degree, of the excellence in learning, and the affordability.”

One of the explanations for the higher number of first-year students is that the admission staff welcomed a larger number of students to campus through the Cobber Countdown Program last spring.

“We welcomed 200 students to campus for a last, best look at Concordia before they made their final decision,” Stumo said. “And that was a significantly enhanced strategy over the previous years.”

Dr. Sue Oatey, vice president and dean of Student Affairs, said that the rise in enrollment numbers was no surprise.

“Karl [Stumo] and the staff in Enrollment and Marketing made very specific plans. … We knew they were doing a broader marketing campaign,” Oatey said. “So the expectations were that [enrollment] would go up, and fortunately it did.”

According to Stumo, it is very hard to predict enrollment numbers from year to year as the college sector is a very competitive marketplace. Stumo said there were two private colleges in the Midwest where freshman classes were 100 students smaller than the previous year. Concordia, on the other hand, is experiencing growth that is likely to continue. Next year the goal is

600 new students, Stumo said.. “We have very significant changes in our strategy for the upcoming years to help pursue that target,” Stumo said. “Everything from the scholarships and financial aid mechanism to better articulation of the PEAK learning and integrative learning programs that are happen-ing here at Concordia.”

New students starting fall 2017 will be required to complete two Pivotal Experiences in Applied Knowledge. According to Oatey, these experiences can be internships, externships, study abroad or other integrated learning experiences.

According to Stumo, “That’s really going to be exciting to talk about with prospective students, because every single student who comes to Concordia and pursues a Bachelor’s degree will be engaged in integrative learning in some way, shape or form, and that’s going to be an exciting story to tell.”

Also, Stumo hopes a four-year guarantee will be attractive to prospective students. According to him, students and their families have appreciated it so far.

“The four-year guarantee really replicates what’s happening here already at Concordia, but now we are going to guarantee it,” said Stumo.

Another possible reason for enrollment growth is that the benefits of the Career Center have been expressed more clearly. While students come to Concordia to learn, they also come to be able to pursue a career after they graduate, Stumo said.

When it comes to diversity on campus, not much has changed this year. Students of color are at 8.6 percent, about even with last year.

“The goal is to be able to continually, little by little, grow that

number to a more diverse freshman class, because that supports academic excellence and learning,” Stumo said.

“We certainly try to work as closely as we can with first generation students of color, to be able to explain what life is like on campus and how much we really want those students to come to campus to contribute,” Stumo said.

Beatty said that the international admissions team have laid down a lot of effort to attract new international students. For instance, they have translated web content for prospective students’ parents into seven different languages. Also,the team has been partnering with other organizations that have strong, mobile online presences to help drive traffic from around the world to the Concordia website.

The team is also looking at in person recruitment efforts, such as visits to areas they believe they can find a good fit with prospective students. Next year they will be going to a couple of places in Southeast Asia: Vietnam, Malaysia and Thailand, which have demonstrated some interests in Concordia and liberal arts colleges. Steve Schaefer from the enrollment team is currently in Norway, partnering with a couple of schools and doing some visits.

“It can take a couple of years before we see effects of these visits, because sometimes we’re talking to sophomores and juniors,” Beatty said. “Similar to what we see domestically.”

According to Beatty, affordability is also a factor. “The cost of attendance for U.S. education continues to go up and somehow we need to try to find a way to meet the needs of students and families.” Concordia is trying to be competitive in terms of providing merit-based and need-based financial aid to students and families from around the world in order to make this an affordable and accessible option for them.

Also, in order to get to know students better and let them ask questions, admitted international students will do Skype interviews with representatives from the team. These are the types of sustainable strategies that really can build good relationships, Beatty said.

Beatty said he thinks international student enrollment will continue to rise because of the sustainability of their new strategies.

Beatty said he feels incredibly fortunate to work for a college where they truly value the international students and the importance of having them here.

“The ideas that they bring, the critical thinking, the creative energy, and the interaction they have with domestic students is essential, especially if we’re trying to educate a global student body,” Beatty said.

Having more international and domestic first-year students influences the campus in several ways. For instance, it means that more students are living on campus. According to Oatey, that makes for a more vibrant residential community.

Residence Life was able to monitor enrollment numbers regularly, which helped them plan for the increase in students.

“They knew what to plan for and were actually able to open a couple of floors that had been offline last year,” Oatey said.

However, there are still a couple of closed floors. Fjelstad is still offline as a residence hall because the science faculty is currently using it as office space. Still, Oatey said they are happy about having been able to open some new floors.