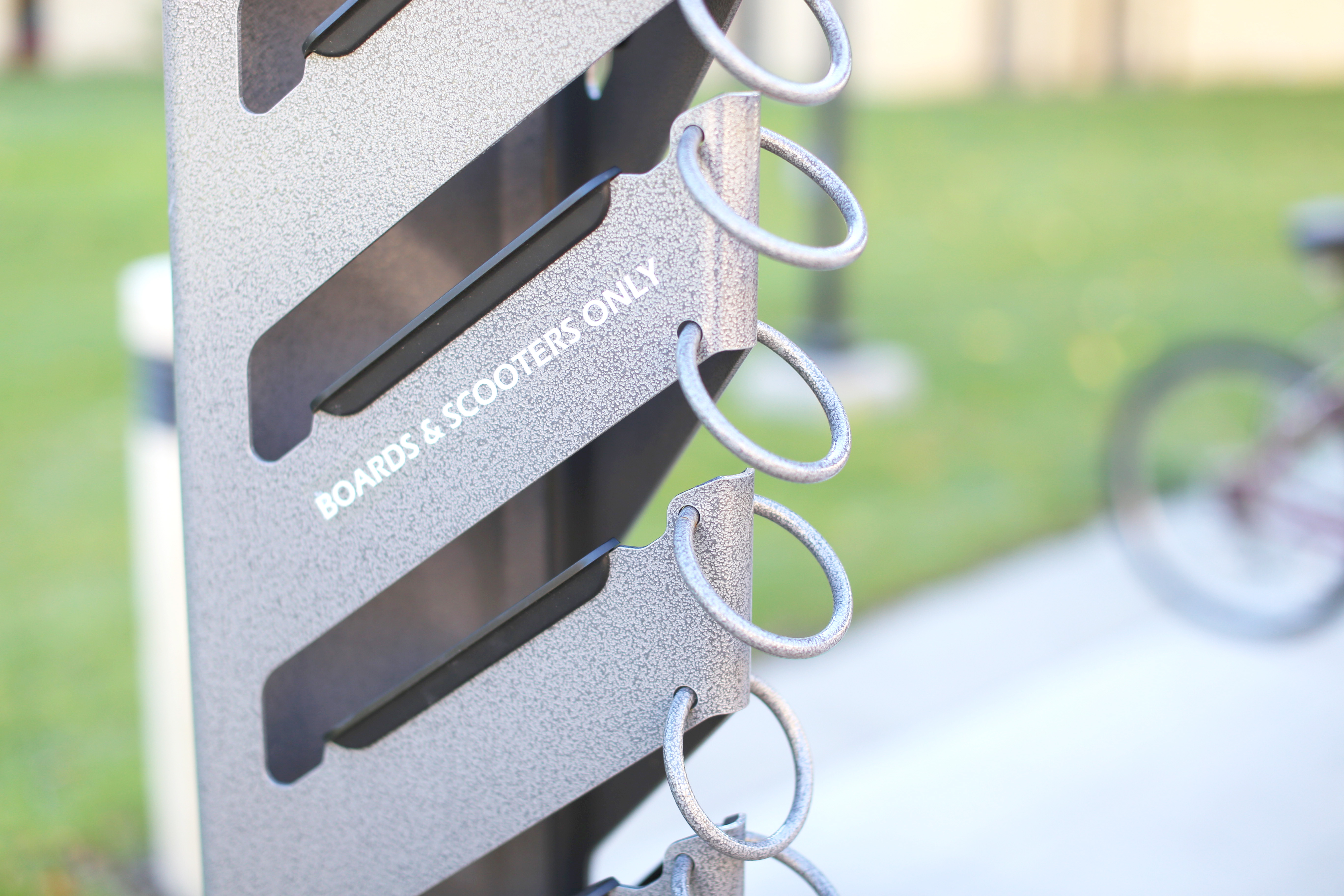 Students walk to hunched over with backpacks and dreams too big to shoulder. Bicyclists whisk by, then someone on a longboard. At Knutson, the cyclists lock up their bikes. The longboarder shelves the board in a rack and does the same.

Last year, current senior Samuel Olson headed the Student Government Association’s Student Services Committee initiative to put a longboard rack on campus. The rack itself sits just east of the CobBike shelter on the south side of the Knutson campus center, and is capable of holding 10 skateboards, longboards or scooters.

“Looking around, I saw all of the bike racks and I saw everyone longboarding,” Olson said. “The idea that bikers have the option to lock their bikes up, and that longboard people might not want to leave their boards lying around. It’s … having a service available to students. It should be there for them to be able to lock their board up.”

Olson’s initiative also acknowledged some of the issues raised by campus administrators about longboards entering classrooms or Dining Services, said Brent Johnson, assistant director of student engagement and SGA advisor. Leaned against walls and sometimes tracking in grime from the outdoors, there needed to be a better place to put boards of any sort.

The rack is made by a company called Park A Bike, which has recently changed its name to Ground Control Systems. To use the rack, one simply needs to slide the skateboard or scooter into the slot and then lock together the two rings that are at the front of the slot. Locking the rings together prevents the board from being taken out from the front. The wheels of the board keep it secure at either end, Johnson said.

“Super simple design, you just have to know to bring your lock and some simple ways to use it and then it’s good to go,” Johnson said.

Student Government provided the funding for the rack through the Special Projects and Initiative Fund, according to Rachael Schauer, the student body president. The total cost of the rack came to $900, and was approved by the SPIF committee as well as Student Government. The initiative was also approved by the Major Projects Committee, which is mostly a group of administrators who approve major projects on Concordia’s campus, as well as the facilities management team.

In Olson’s proposal, he mapped out three different locations for the longboard racks, each centered around the Knutson campus center. Eventually, it was decided that near the CobBike shelter made the most visual sense for the area, Johnson said. Olson then worked with facilities management to get the rack anchored into the concrete.

The initiative itself was proposed last fall and in April the rack was put in place, according to Schauer.

“Last spring, we did some advertising, saying, ‘Here is the rack. This is how it works,’ with a little video,” Schauer said. “And then, so far this fall there hasn’t been much advertisement for it … but right now we are pursuing how to have locks available for students.”

Olson is excited to see the results of the initiative, especially since a lot of his friends longboard. To him, the project made a lot of sense in that it was a high impact, easy-to-get-done project that will provide a service to students for years to come.

Currently there is only one rack, but, according to Johnson, if the rack is successful and is used by students, more could be requested for other parts of campus. For Johnson, the project also speaks to the campus’s commitment to sustainable transportation.

“If [students] live a few blocks off campus, don’t hop in your car, hop on your longboard.”