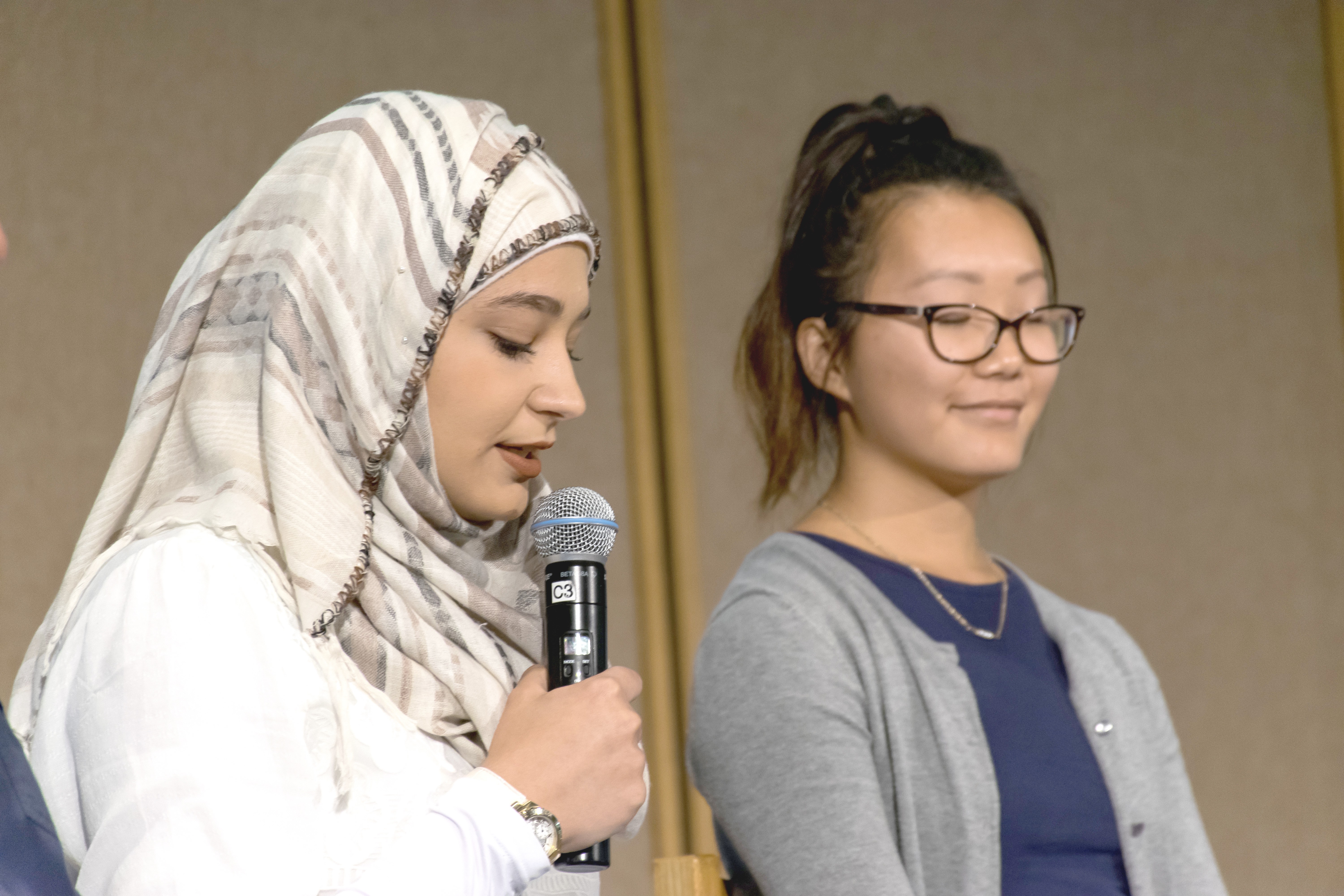 Drevlow, who is in his second year at Concordia, is a pianist, a leader of the campus conservative group and white. Mahmoud Toumeh is Syrian. He is a graduate student at NDSU, and he lost his grandfather and close friend in two violent government attacks.

Drevlow and Toumeh had met only a few days earlier, but they were each sitting in front of a crowd and sharing a personal story that belonged to the other. The men were participating in a story exchange facilitated by the global organization Narrative 4 at this year’s Faith, Reason and World Affairs Symposium.

Narrative 4 recently partnered with Concordia, making the college the first fully integrated partnership of the organization and a pioneering example for Narrative 4’s future with other higher education institutions. Dawn Duncan, English professor, and Micaela Brannan-Gerhardt, senior, introduced students and faculty to Narrative 4 and its core methodology during the Symposium concurrent session “What’s Your Story? Using Narrative to Foster Empathy in Our World.”

Narrative 4’s mission, according to their website, is to build “a community of empathic global citizens who improve the world through the exchange of personal narratives.” The program is designed to “build a mutual trust that strips away the typical narratives of cynicism and despair,” and it ignites this process through the practice of a story exchange.

During a story exchange, participants pair up with a stranger and spend at least 30 minutes exchanging stories inspired by a predetermined prompt. The exchanges are confidential, but each person shares only what they feel comfortable disclosing. Lee Keylock, director of programs for Narrative 4, refers to this as the “Vegas Rule”: what is said during a story exchange stays in the story exchange.

After a period of reflection, the pair will join a small group of other couples, called a “circle of trust,” and tell the story they heard from their partner using the first person, like Drevlow did for Toumeh.

“If I can hear your story deeply enough to retell it in my own words, as if it happened to me – and you can do the same for my story – then we will have seen the world through each other’s eyes,” Narrative 4’s website explains.

The exchanges are a lesson in empathy and aim to address the empathy deficit, which Keylock says is the world’s biggest problem.

“Empathy is not this ethereal ‘kumbaya’ thing. It requires a lot of muscle to tell a story and then carry a story,” Keylock said at the concurrent session.

Duncan, who has worked tirelessly to facilitate the partnership between Narrative 4 and Concordia, does not pretend that the story exchanges are enough to overcome the community’s empathy deficit, but instead emphasizes the importance of the work and progress that occur after the exchanges.

“When Valley 4 began what seemed to me a very hostile dialogue – well, I wouldn’t even say it’s a dialogue – a very hostile monologue about our immigrant and refugee population, and began to stir up an atmosphere of hostility and hate, a mutual friend of [Colum McCann] and I introduced me to Narrative 4,” Duncan said.

Duncan was a friend and longtime reader of the award-winning author McCann, who is the founder and president of Narrative 4. She was immediately enamored with the organization’s philosophy and knew she wanted to get involved and use the story exchange methodology to address tensions in the community.

Brannan-Gerhardt, who now sits on the Narrative 4 youth advisory committee, approached Duncan last spring about a summer research project and was equally excited by the potential of Narrative 4 on campus. Together, they spent the first half of the summer in the library, collecting research in order to prove that Narrative 4’s methodology was effective.

In June, Brannan-Gerhardt and Duncan traveled to Belfast, Northern Ireland, for Narrative 4’s 2016 “Broadening Our Reach” Global Summit, where they each experienced their first story exchanges.

Both were paired with impressive and, at first impression, intimidating partners. Brannan-Gerhardt exchanged stories with Israeli author Assaf Gavron, and Duncan exchanged with one of the primary financial backers of the summit.

“We all have baggage, and we all have blinders about some things,” Duncan said about her initial reaction to her story exchange partner.

Duncan grew up in inner-city Dallas in a struggling family and has worked her entire life to dismantle the emotional reaction she often has when confronted with great wealth. For her, this story exchange was especially pertinent.

“We sat down across from each other, face-to-face and eye-to-eye, and all the extraneous externals about money completely dropped away, and in front of me was this amazing person making herself completely vulnerable to me,” Duncan said.

Her partner, who shared her story first in the exchange, prompted Duncan to share a story that she had never told before.

“I could trust her with it – this woman, who had I met somewhere else under different conditions, I might not even have been comfortable speaking to. The bonding was immediate. It was real. It was powerful . . . It still gives me chills to think about it,” Duncan said.

“I come from a very conservative small town with pretty much all white people, so Toumeh was the first Muslim person that I met, the first Syrian that I met. Coming from a small town like mine, you kind of have these perceptions of what a person like that is like, and Toumeh completely defied that,” Drevlow said.

Drevlow and Duncan’s experiences are two examples of Narrative 4’s goal of eliminating the “other.” Duncan says that this kind of experience is exactly what Concordia should be giving its students. For her, Narrative 4’s notion of “empathy in action” is the living embodiment of Concordia’s mission.

“To be truly thoughtful, you need to have your heart open as well as your mind. And, if you’re going to influence the affairs of the world, then you better understand something about all these other people in the world who are vastly different from you,” Duncan said. “If all you ever do is try to see yourself in others, that is an act of narcissism; but, if every person is unique, there is no other.”

Plans for integrating the Narrative 4 methodology into Concordia’s community are still in the works. Duncan is in conversation with students, faculty and community members about the many ways the story exchange could be used inside and outside of the classroom. There are currently story exchanges tentatively slated for both Social Justice Day and Martin Luther King, Jr. Day on campus.

After the concurrent session, Duncan, Keylock and Brannan-Gerhardt led a Narrative 4 facilitator training session for faculty and students interested in leading story exchanges on campus and in the wider community. There will be a second training session Oct. 19 from 7 to 8 p.m. in Olson 139.

“[Sharing] can feel self-indulgent if you’re not used to it,” Duncan said. “But, the truth of the matter is that if I had not experienced [a story exchange], I might not know the full power and responsibility that rests on me to exercise that very same care and empathy for everybody else in that circle and beyond.”

Sydni Kreps is graduating in December 2016 from Concordia with majors in multimedia journalism and communication studies. She edits the Opinion section. You can often find her hiding in dark, quiet places reading a book by the light of her computer screen. She likes friends too. Sydni has also served as a copy and literary editor for Djembe: A Journal of Intercultural Affairs, and as an editorial intern for the Concordia Language Villages. If you misplace a comma, she will find it.