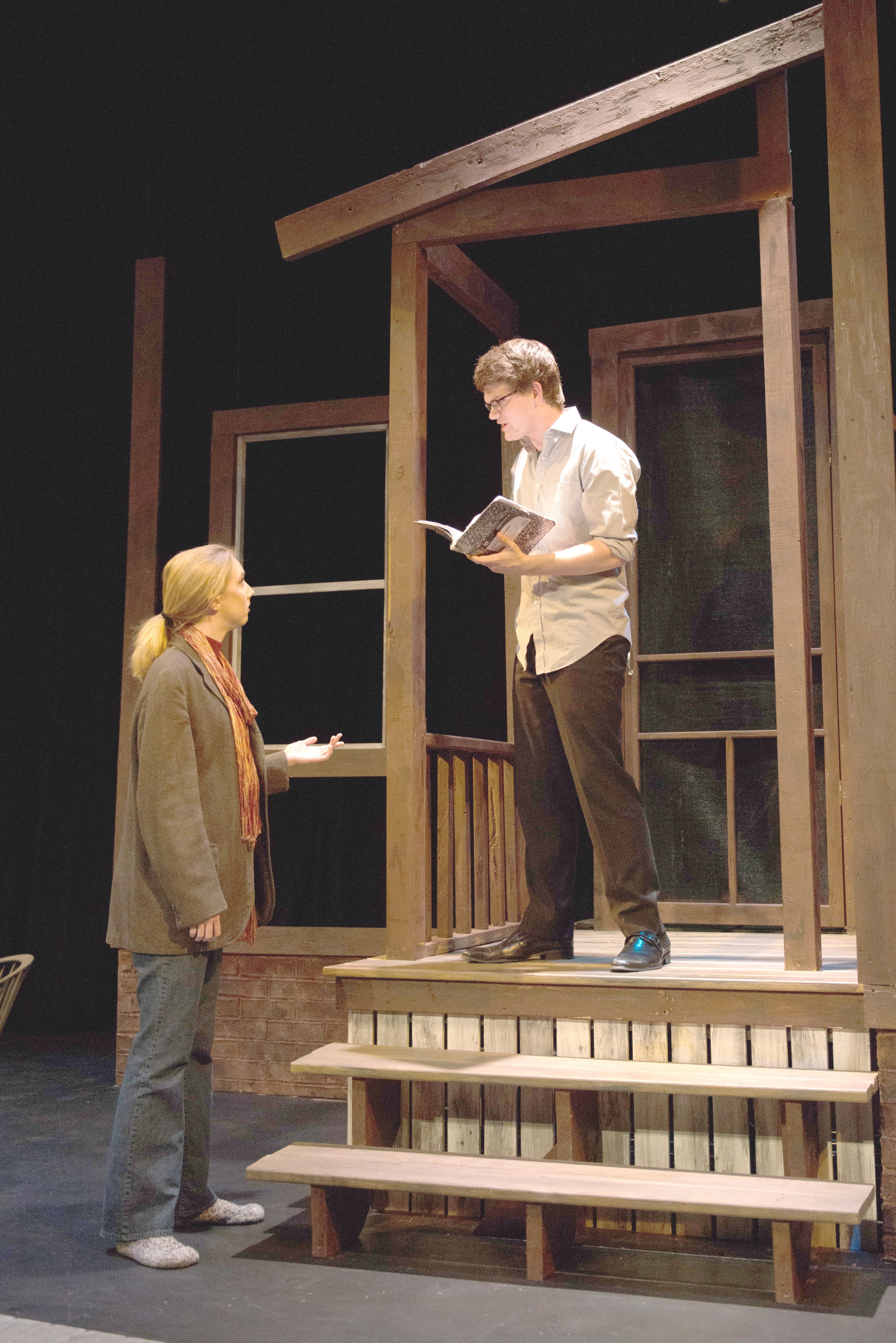 What do you get when you add a grieving daughter, an unforeseen love interest and a paradigm-shifting proof? This week, the cast and crew of Concordia College’s production of “Proof” are doing the math.

David Auburn’s Tony and Pulitzer Prize-winning “Proof” tells the story of Catherine, who has served as primary caregiver for her father, Robert, a once-brilliant mathematics professor, throughout his long battle with a debilitating mental illness. While Catherine attempts to pick up the pieces after her father’s death, his former student, Hal, works to piece together the works of Robert’s final years. Hal pores over hundreds of old notebooks filled largely with scribbles written during Robert’s delusional periods, until one day he stumbles upon a proof that could revolutionize the math world. However, Catherine claims that her father did not write that proof; she did.

The play follows Catherine’s struggle to verify the authenticity of the proof, as well as her budding romance with Hal. It grapples with the power of love and the nature of genius. It places the proof center stage, proving that math and art may not be so separate after all.

Senior Caleb Camrud, who plays Hal, is familiar with the interplay between math and art. He is a mathematics and political science double major with a minor in philosophy; he has also performed in theatre since the seventh grade. His recent theatrical credits at Concordia include Claudio in “Much Ado About Nothing” and the titular role in “Dracula.”

“A lot of people don’t see mathematics as art at all,” Camrud said. “But there’s definitely a very creative side to mathematics. … A lot of mathematics is taking things that have already been solved, different theorems that you put together in new and creative ways to come up with new things.”

In this particular play, he said, the biggest interaction between art and mathematics is the underlying question of what it really means to prove something – in this case, both the validity of the proof and its author.

“In math, there’s a certain kind of system that you have to put things together to say that it actually got proven,” Camrud said. “You have this set of axioms, and then, from there you move forward and you build them up through rules of inference and stuff until you get to your theorem …. then you say that your theorem is proven. In real life, it’s much more difficult to prove anything.”

Three of the play’s four characters – Catherine, Hal and Robert – are all mathematicians in their own right. According to Wintersteen, the cast has spent a great deal of time throughout the rehearsal process discussing what being a mathematician really means.

“We’ve been exploring the culture of mathematicians,” Wintersteen said. “What are mathematicians like as a group as opposed to other groups? Can we draw some general conclusions about how people are? There are people who’ve got those really high level math skills; are there either general or particular things we can draw on in terms of creating characters?”

To answer these questions, Wintersteen enlisted the help of Ellen Kinney. Kinney, a senior math major and theatre scholar, is serving as dramaturge for the show.

Dramaturges, traditionally, are people who are familiar with the material behind the plot of a show. They provide context to the script and work with the actors to develop more realistic portrayals of the characters involved. For Kinney, this has meant going beyond the stereotypes that are typically attributed to mathematicians.

“There is this kind of assumption that mathematicians are very quiet and strange, people who most people really can’t understand,” Kinney said. “It is a different world, if you populate your head with numbers.”

In many portrayals, such as the film “A Beautiful Mind” and even some productions of “Proof,” Kinney said, that aspect tends to be overplayed.

“What I really wanted to bring to this performance is that the main characteristic of mathematicians is that they have this great enthusiasm about their work, and they get very excited about it,” she said.

Kinney has also been working with the Concordia Theatre Public Relations office to create a lobby display which will hopefully give less mathematically inclined audience members a greater understanding of the proofs discussed. The display includes a poster explaining the structure of proofs, as well as a collection of tangible puzzles made of blocks and pegs, that will allow people to figure out proofs on their own.

“There will be solutions available, if people get frustrated,” she said.

While math is at the center of the plot, Wintersteen says audience members do not need to have any knowledge of math to appreciate “Proof.” It is a well-crafted play, with enough humor and humanity to draw all audience members in.

“It’s really about the place where we can go where we can know something, and then where do we need to take that leap of faith?” Wintersteen said. “In the world of mathematics, you can prove things. In the real world, you have to just believe sometimes.”

“Proof” opened on Oct. 11 and will run through Sunday, Oct. 16 with showtimes at 8 p.m. Tuesday through Saturday and 2 p.m. on Sunday. Concordia students, faculty and staff, as well as NDSU and MSUM students, get one free ticket. Cost is $10 for adults and $5 for other students and senior citizens.