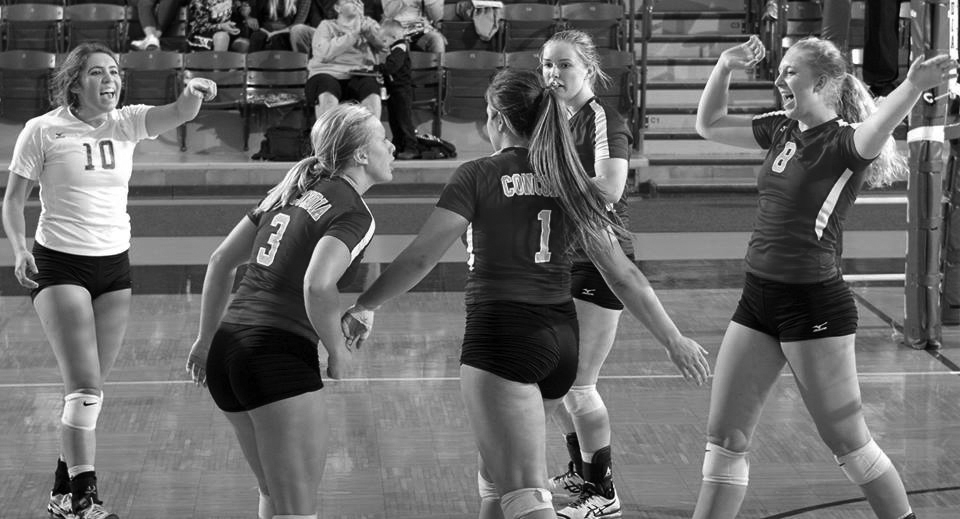 School is all about learning new things, but for the volleyball team the learning doesn’t stop in the classroom. Once they have finished their classes for the day and put away their textbooks, they step onto the court and continuously learn how to play together.

While every year brings a graduating class, the volleyball squad lost a fair amount of their team and were left with two to fill the empty shoes and show their seven freshman what college volleyball is all about.

“It’s kind of teaching them the ropes until they get the hang of things,” said senior Jena Klaphake. “I feel like there is definitely that time to figure it out. It’s been being patient and letting everything come together.”

Right now, being half why through the season, the team is still working out some kinks.

“We have the potential to be a very good team and we have shown that at times,” senior Mandy Mercil said. “It’s just been a lot of highs and lows which comes with being young.”

The graduating class left a hole in the hitting positions for the team this year, leaving the team to another adjustment beside being a fairly young team. Audience members may have noticed this change while sitting in the stands. While last year and previous years Mercil and Klaphake both played a fair amount in the setter position, Mercil now does a little of both, setting and hitting.

While Mercil has become a little more versed in her position playing ability this year, the newbies are working with the adjustments as well. By being thrown right into the mix of things. The adjustments have been an obstacle for the team all around.

“I’m just trying to be very patient, I know what it was like to be in their shoes,” Mercil said. “They have very big roles on the team. I also started as a freshman and had to jump right into playing, fortunately I had more veterans on the court to help me, now the veterans are the minority.”

Where they may be lacking in hitters, they make up in other ways, but even those sometimes aren’t good enough.

“We’ve hung around every game and fought hard,” Mercil said. “We are really a egressive servers and that really saved us.”

For Mercil it’s just desire to keep a consistent play.

“We could work on finishing and consistency,” Mercil said. “There has been a lot of matches where we score 23-plus in points and don’t win.”

As a team, they are working through these struggles.

“As a whole I really think our girls are finding their sports, their roles,” Klaphake said. “I think before it was just a little bit of uneasy and maybe not playing confidently and now I think maybe everyone for the most part is a lot more confident in their role and what they have to do and what they bring to the team.”

While they may be starting to mesh a little better than earlier, the team will put it to the test in the next couple weeks.

“I think we are definitely in a pretty good place considering where we are at in the season,” Klaphake said. “We are playing the best, probably that most consistent play we’ve had all season which is good, because this is the time of the season that we really need to step up and win some big games. It will be a good test for us.”

Although they may be playing the best they have all season, that needs to translate in the next couple of games as well.

“We have the potential to be a very good team,” Mercil said. “We have a lot of thought conference games left to determine if we make the playoffs and if we do we could have a pretty dangerous squad.”

Cobber fans can see the volleyball squad in action Oct. 29 as they take on Saint Benedict.