Local students on the march 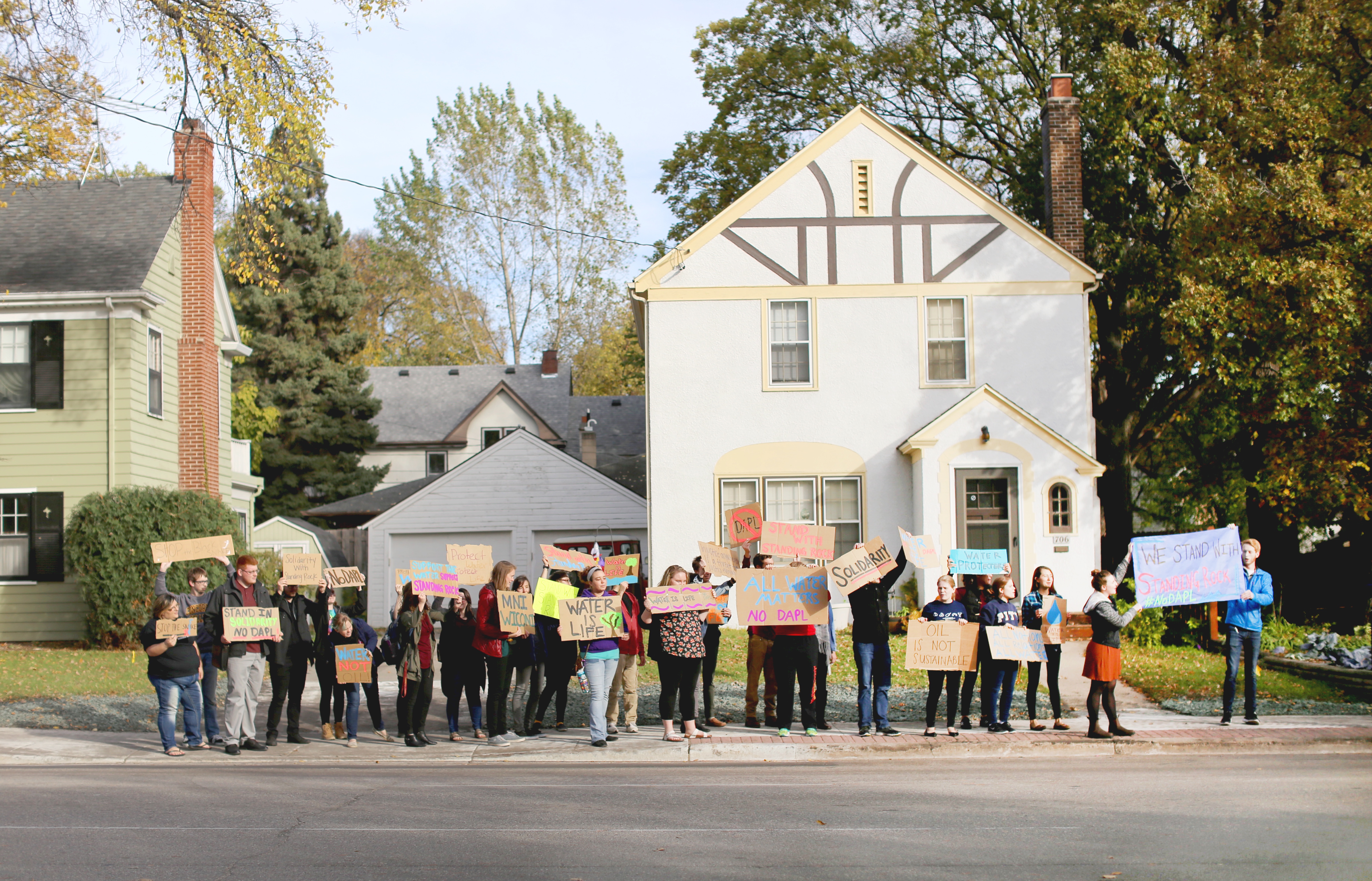 “Water is life, water is life!” the college students shouted as they walked along 8th Street. They held their hand-painted cardboard signs high, expressing “We stand with Standing Rock,” “Oil is not sustainable,” “Protect water, protect life” and more. Passerbyers stopped and stared, horns blared from cars, KVRR news station followed the crowd.

Student Environmental Alliance and Minnesota Public Interest Research Group joined together to march last Friday to protest against the North Dakota Pipeline, in support of the NoDAPL– No Dakota Access Pipeline – movement.

Co-president of SEA Sam Ferguson got the idea for the march when she saw some of her friends at Gustavus do it. She reached out to the organizers of the NoDAPL supply drive, and the march was set.

“Everyone in SEA and MPIRG supported NoDAPL and wanted to show their support,” Ferguson said. “Doing something physical, having people go on a walk and shout reaches other people. It’s a good way to take action where you can make an impact rather than just sharing or liking something feedback.”

Other co-president of SEA Grete Oanes was excited to have the march officially planned to show support for the affected community.

“At Concordia, where we are told to care about social justice issues but not necessarily doing something about it often,” Oanes said. “I think this gave us an opportunity to show others that we are aware what’s happening in the world and what’s happening very close to us and we think it’s important and we care.”

Dr. Jonathon Steinwand, advisor of SEA, was pleased students were putting forth efforts towards energy politics and environmental justice.

“Students should do their research and learn what they stand for and take responsibility to stand up for what they believe,” Steinwand said. “In this case, standing in solidarity with the Water Protectors at Standing Rock is a call for a more serious discussion about energy policy and infrastructure, about the history of environmental injustice against indigenous people in this country, and about the future of our water and climate.”

The students met in Knutson to create the signs before the march. Once everyone arrived, people picked a sign and the march began. The group of 25 to 30 people walked to Park Region, then to 8th Street, and stopped at the intersection of 8th Street and 12th Avenue. People spread out at all corners of the intersection, ensuring that their voices were all heard. Afterward, the protesters walked through campus, passing the bell tower and ending in front of Knutson again.

“As much as we don’t see the oppression happening or its direct effects on us, it’s important to stand in solidarity with a community that needs their voices to be heard,” Ferguson said. “As a young person, to make other students aware of these things, such as the oil industry affecting our world, is important because we all need to be informed.”

“This is such a clear violation of rights,” Oanes said. “The pipeline was supposed to be going by Bismark, but they moved it to affect a more marginalized population. To me, that is so clearly wrong that I don’t know how people can think it’s a good idea.”

Dr. Kenneth Foster, chair of President’s Sustainability Council, applauds the students who partook in the march.

“The story of the Dakota Access pipeline illustrates how our current political and regulatory system is skewed in favor of the interests of the fossil fuel industry,” Foster said. “Protest actions are a reasonable response to this situation and a valuable part of our democracy. I’m very glad that these students are learning and exercising the skills of democratic citizenship that are needed to be responsibly engaged in the world.”

This march was not solely for Concordia students, but opened to the community. MSUM students joined the march, and a few citizens demonstrated their support by walking and chanting as well.

“It was cool to see so many people supporting the cause,” Ferguson said. “Not only on campus, but the wider community as well.”

“I was moved and empowered by the march,” Oanes said. “I was worried about how many people would show up given the overlap between SEA and MPIRG, but lots of people came–people I didn’t know or didn’t expect to come. That was great.”

For the future, Ferguson hopes to have more outlets on campus to engage students in the cause. She sees this taking form through an artistic collaboration such as highlighting plastic consumption.

“SEA has talked about doing a week where we ban plastic things on campus,” Ferguson said. “We’d do an art piece where we’ll take the fork they get at the Maize and add it to the art piece.”

Whatever it may be, demonstrating what is happening within the world and that people can voice their beliefs on the matter in order to make a difference is the goals of these organizations.