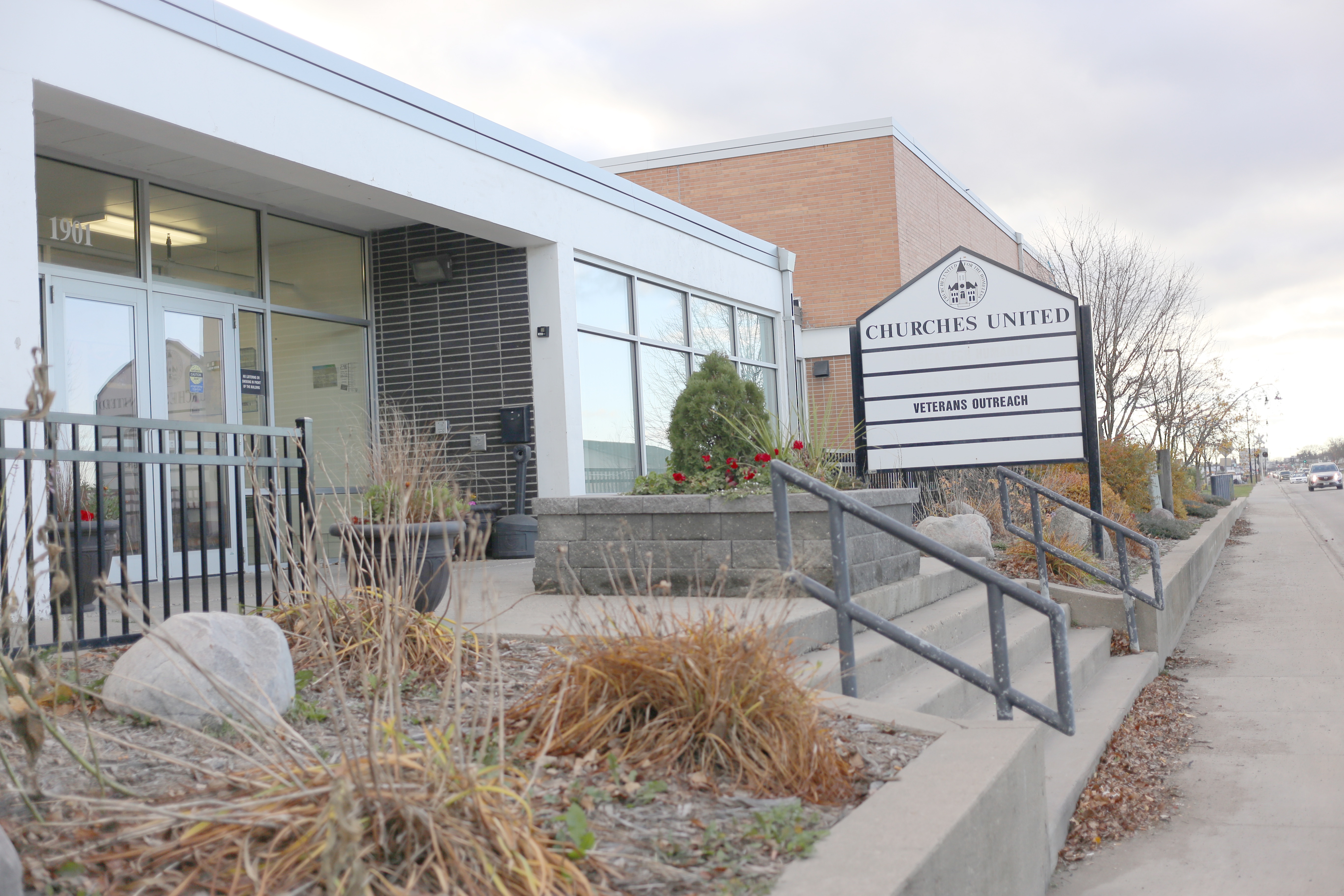 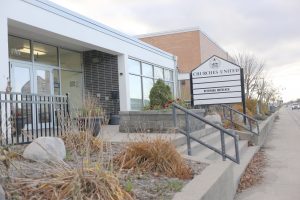 A string of orange garland lines the door to Churches United for the Homeless, while grinning Jack-o-Lanterns cling to the windows. Inside, plastic pumpkins and cardboard turkeys line up on coffee tables and bookshelves to greet visitors. The shelter’s lobby is festive, but more importantly, it is warm.

Outside, wind blows with the bite of another long Minnesota winter to come. The cold weather is bothersome for all; for those living without homes, it can be life-threatening.

A 2015 Wilder Research survey reported that nearly 600 adults, youth and children are currently living without a home in the Fargo-Moorhead area, a decrease of 32 percent from Wilder’s 2012 survey. But this count, collected on a single night in October 2015, should be considered a minimum; it cannot account for all those living in cars or on benches and friends’ couches. Hundreds may remain hidden, a population invisible to the naked eye.

With subzero temperatures just around the corner, local shelters and clinics, and even some Cobbers, are working to shed light on this issue.

“It’s troubling to know that they estimate that there’s as many as 800 to 1000 people experiencing homelessness every night, but the shelters can only offer about 350 beds,” said Lisa Lipari, member relations director at Churches United. “Where are the other 500 people going?”

According to Lipari, Churches United reaches full capacity every day. In August, the shelter had to turn away 44 families. That number rose to 47 in September, and will likely continue to rise as the temperatures fall.

To cope with the increase in demand in winters past, Churches United has “filled every nook and cranny” of the shelter, placing overflow mattresses on the floor of the dining room and the chapel. But this method proved ineffective, as the shelter’s staff became overstretched and unable to provide every visitor with proper case management.

This year, Churches United is partnering with the F-M Sheltering Churches Project, a collaborative effort between local churches to provide overflow shelter in the winter months. Single women will be able to complete the intake process at Churches United and be transported by bus to a nearby church, while single men can do intake at the New Life Center in Fargo.

“The last two years, what I’ve witnessed is that it felt like we were just bailing water,” Lipari said. “By reducing our numbers where overflow is concerned, it’ll allow us to patch the hole in the boat and hoist a sail and actually start moving across the water to get to where we need to be.”

In downtown Fargo, Family HealthCare is also bracing for winter. FHC is a family-oriented primary care clinic that offers optometry, dentistry, pharmacy, diet and fitness assistance regardless of patients’ ability to pay.

“The harsh reality is that a lot of people continue to sleep outside during the winter months,” Fear said.

Frostbite is common, especially on hands, feet, cheeks and tips of ears. In milder winters, the clinic sees several cases of trench foot, a painful condition caused by prolonged exposure to moisture.

The winter is especially dangerous for those struggling with alcoholism and mental illness, Fear said, as it can prevent them from staying in the safety of a shelter.

“Imagine having paranoid schizophrenia and being in a single room with 50 other people talking all at once, and at the same time you have visual and auditory hallucinations,” Fear said. “It can be extremely overwhelming for those people and they don’t really have any outlet, no escape, to get away from that.”

Unfortunately, resources are limited for those in the homeless population who are struggling with these issues. The Gladys Ray Shelter is the only shelter in Fargo-Moorhead that takes in people who are intoxicated, but they can only serve up to 25 adult males and 10 adult females in a single night. FHC is no longer able to provide mental health care, a problem which Fear attributes to the enormous lack of psychiatrists and psych nurse practitioners in North Dakota.

For Fear, one of the hardest parts of the job is hearing stories of those who are unable to get the help that they need and end up freezing to death on the street.

“For service providers, when we see those articles our heart just drops to our stomach,” she said. “Some of the comments you read are ‘Oh they were probably drunk,’ but I don’t think anybody deserves to die.”

Lipari and Fear agree that the dangers posed by the cold weather are made even harder to bear when combined with the treatment that those without homes receive from the rest of society.

“They feel every bit of judgement that’s coming from everybody, they feel all of those turned heads and sideways glances,” Fear said. “We think that these people are the way they are because they want to be that way, they want to live off the government. … I have yet to meet someone who enjoys living off the system.”

Lipari admits that, prior to working with Fargo-Moorhead’s homeless community, she had believed those stereotypes. But since being at Churches United for two years, her perception of those living in poverty has changed completely.

“I think that people have that panhandler or ‘drunken bum’ picture in their mind when they think of folks that are experiencing homelessness,” she said. “It doesn’t take long when you’re around here to realize that there might be people that you’re crossing paths with during the day who are sleeping in their car that night.”

Students at Concordia are working to change perceptions of homelessness on campus. Better Together and Campus Service Commission hosted Homelessness Awareness Week Oct. 17 to 21. The week’s events included a panel with local experts on the topic, including Lipari and Fear, as well as a sock drive in partnership with the Fargo branch of The Joy of Sox, a national organization which works to distribute clean socks to those living in homelessness. By the end of the week, 189 pairs of socks had been collected.

Senior Adam Kolling, lead commissioner of Campus Service Commission, was pleased to see so much support for the sock drive from the campus community.

According to junior Sara Funkhouser, co-president of Better Together, all interfaith organizations across the country pick one social issue to work on, and Better Together chose homelessness. For the past three years, the organization’s end-of-the-year service project has been putting together hygiene kits to donate to Churches United.

Funkhouser hopes that Homelessness Awareness Week, as well as Better Together’s work throughout the year, will open the eyes of Concordia students to an issue that we often choose to ignore.

“We don’t want to see [homelessness], because it affects us from a place of privilege when we see people that don’t have something that we have,” she said. “People don’t know how to address the issue, coming from a place that’s not just of pity. It’s really easy to say ‘Oh poor you, you don’t have a house, you’re sleeping on the park bench,’ but it takes a lot to actually address the issue and say ‘I’m personally going to make a difference to help end this.’”

For those who are interested in making a difference in the community, local shelters are always looking for volunteers to help clean, paint, or serve a meal. But according to Lipari, sometimes the best thing to do is share in community with those in need.

“I really encourage people to come with a friend and join us for a meal time in the community center,” she said. “Sit down with folks who are dining here and just have a conversation, learn more about what they are experiencing. … When it’s a real person with a real name who’s right in front of you and you hear about their story, you learn that true strength and resilience is exhibited here daily. And hope. There is still hope.”