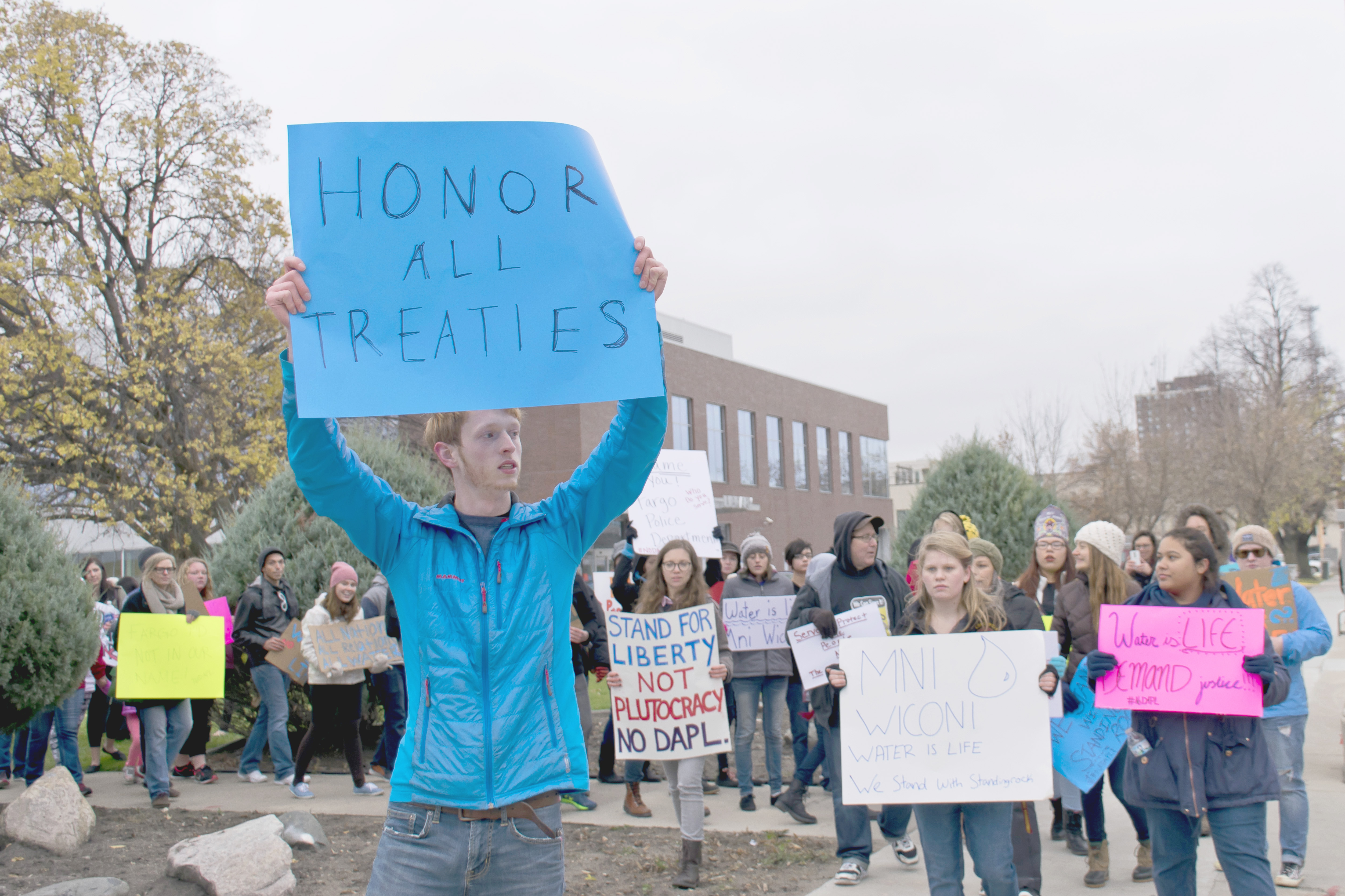 Around 60 people gathered on the Veterans Bridge on Sunday afternoon. Burrowed in coats, hats and mittens the people held their signs of protest against the Dakota Access Pipeline and Fargo police involvement to passing cars. Children even got involved; a young boy made a sign saying, “Don’t go to the dark side. Save the erthe [sic]!” Cars honked, even an oil tanker train honked as it drove by and some gave a thumbs down. The group of families, students and Native Americans marched, all the way to the Fargo police station.

The Fargo police department has sent 50 officers to the Dakota Access Pipeline protests at Standing Rock, costing North Dakotan taxpayers six million at this point, according to Valley News Live. Two weekends ago, 142 people were arrested, some detainees were brought back to Fargo to be held.

“MPIRG is involved in this fight because it’s a civil rights and indigenous justice issue and an environmental justice issue,” Drevlow said in an email. “The pipeline was initially supposed to cross the Missouri River 10 miles north of Bismarck, but the state claimed that the potential of pollution from a spill was too great. What’s happening is the Standing Rock community is literally being forced at gunpoint to accept the leaky pipeline that the white people in Bismarck didn’t want. MPIRG will not stand by and watch a population get marginalized for corporate interests.”

The march began on the Veterans bridge where Concordia students, families, Native Americans and other community members sojourned. They held their signs to passing cars stating “Shame on you, Fargo Police Department!,” “Serve and protect the people, not the corporations,” “NoDAPL, Protect our water,” and more. Individuals of the native community led a prayer and performed a water song. After a half an hour of standing on the bridge, the protesters began their walk to downtown.

Police officers showed up in their vehicles watching the protesters, but they made no move to intervene. After an hour of marching, the protest convened.

“I was really surprised at the amount of people who showed up on such short notice,” Tooker-Kirkevold said. “There was even grandparents who brought their grandchildren because they wanted to show them that we stand up for people even if they’re not in our own community. Overall, it was a successful event.”

Deb Dorman, a descendant from the Bois Forte tribe in Minnesota and Fargo resident, attended the march on Sunday.

“One thing that concerns me is that a lot of people are saying that the water protectors are not following the law, but nobody is paying attention to the treaties,” Dorman said. “That is the supreme law of the land. Native people need to be heard.”

Julia Kohler, member of MPIRG, attended the march as well. She went to show the people of Standing Rock that they have support from all over the state.

“The pipeline affects the Fargo-Moorhead area because we’re sending police out there and if we want our police to represent how they stand up for our community, then it’s not right to send them out there to protect the corporation,” Kohler said. “Who do they serve?”

Drevlow and Tooker-Kirkevold planned the march a day before it took place. When they had learned about the Fargo Police involvement, Drevlow and Tooker-Kirkevold started a Facebook message and event for the march, inviting anyone they thought would be interested in participating. They reached out to the native community in Fargo through social media, asking them to lead the march since it was for them.

“People are really against this pipeline, and we want Fargo police to know that their actions are heinous and wasteful while the taxpayers pick up the tab,” Drevlow said.

To continue sending their message to the Fargo Police, students and community members are crafting a letter to voice their concerns about the police department’s involvement and why they should withdraw.

“This affects all of us,” Drevlow said in an email. “What will we do when the drinking water of 18 million people becomes inevitably polluted?”

“We’re getting our voice out there,” Tooker-Kirkevold said. “We’re showing that not only the native community cares about this but people of Fargo do not support their tax dollars going towards this obvious infringement on native rights, treaty rights and human rights.”

“I feel that the Fargo police department had a good relationship with the Native community,” Dorman said. “This feels like a stab in the back.”

To bring more awareness on campus, Student Environmental Alliance and MPIRG teamed up to do an oil spill flash mob on Tuesday at 12:10 p.m. in the atrium. Wearing all black with the effects of fracking facts clipped to their shirts, the students laid on the ground. Individually, each student stood up and stated their fact.

“It has been life-changing to stand up for something you believe in,” Kohler said. “Even the littlest support goes such a long way.”

MPIRG has organized marches before, last one on Oct. 14 where they marched on 8th Street and Concordia College’s campus, protesting against the Dakota Access Pipeline.

Concordia students have had the opportunity to see how the Native communities are being affected directly. On Oct. 15 to 16, MPIRG went out to Standing Rock where they brought winter gear, food, water tanks and a generator that they had received as donations during their NoDAPL supply drive to the protesters and helped them winterize their camp.

“I didn’t know what to expect,” Tooker-Kirkevold said. “I read articles and talked to people who went there – I had all this information but it’s so different experiencing it first hand, which is to be expected but I was blindsided by it a little bit.”

The Native community showed their appreciation to the students by ensuring that they had enough food and water, asking them if they could help them set up and show them around the camp.

“I said to them, ‘We’re here to help you. This is amazing, but how can we serve you?’” Tooker-Kirkevold said. “They were so welcoming and cordial, they created a family atmosphere.”

After setting up camp, some students went off to help with preparing meals. Others went a women’s meeting where they learned about women’s roles in protecting the water. Some went to help sort winter gear. Once they had completed their tasks, students had the chance to participate in some of the Native Americans’ traditions, particularly at the prayer circle.

“One of the most powerful moments that none of us will ever forget was at the prayer circle,” Tooker-Kirkevold said. “We were standing on the outside of the circle because only tribal leaders and fire keepers could be inside the circle. One of the tribal leaders invited us into the circle, which was amazing. He asked us who they were, why they came and why they stand in solidarity with them. We all went down the line and said why each individual person came.”

“About 150 people came and shook each of our hands, giving us hugs, thanking us for coming and for being a part of their family,” Tooker-Kirkevold added. “It was a bring-you-to-tears type of moment, it was so beautiful and so unexpected.”

The experience was so powerful and influential, the students are going to return to Standing Rock the third weekend in November.

“There’s so much work to be done,” Drevlow added in an email. “The water protectors cannot stress how much even volunteering for a few hours helps them, giving them time to catch up and rest from their tireless efforts.”

To demonstrate and reflect correctly on the movements MPIRG is doing, they changed their Facebook group name from MPIRG-Concordia to MPIRG-Fargo/Moorhead.

“We changed it not only for this event [the march], but also for a lot of our activism things and events,” Tooker-Kirkevold said. “A lot of the initiatives we cover do support the broader Fargo-Moorhead community. We don’t just stick to Minnesota because we are aware of the close-knit Fargo-Moorhead community. By changing our name, it gives a more accurate representation of the work we do as an organization.”

As the student organization continues to put forth efforts to make an impact on the construction of the pipeline, they recognize that change does not come quickly.

“I don’t see this ending anytime soon,” Tooker-Kirkevold said. “We are in this fight with them for the long haul.”