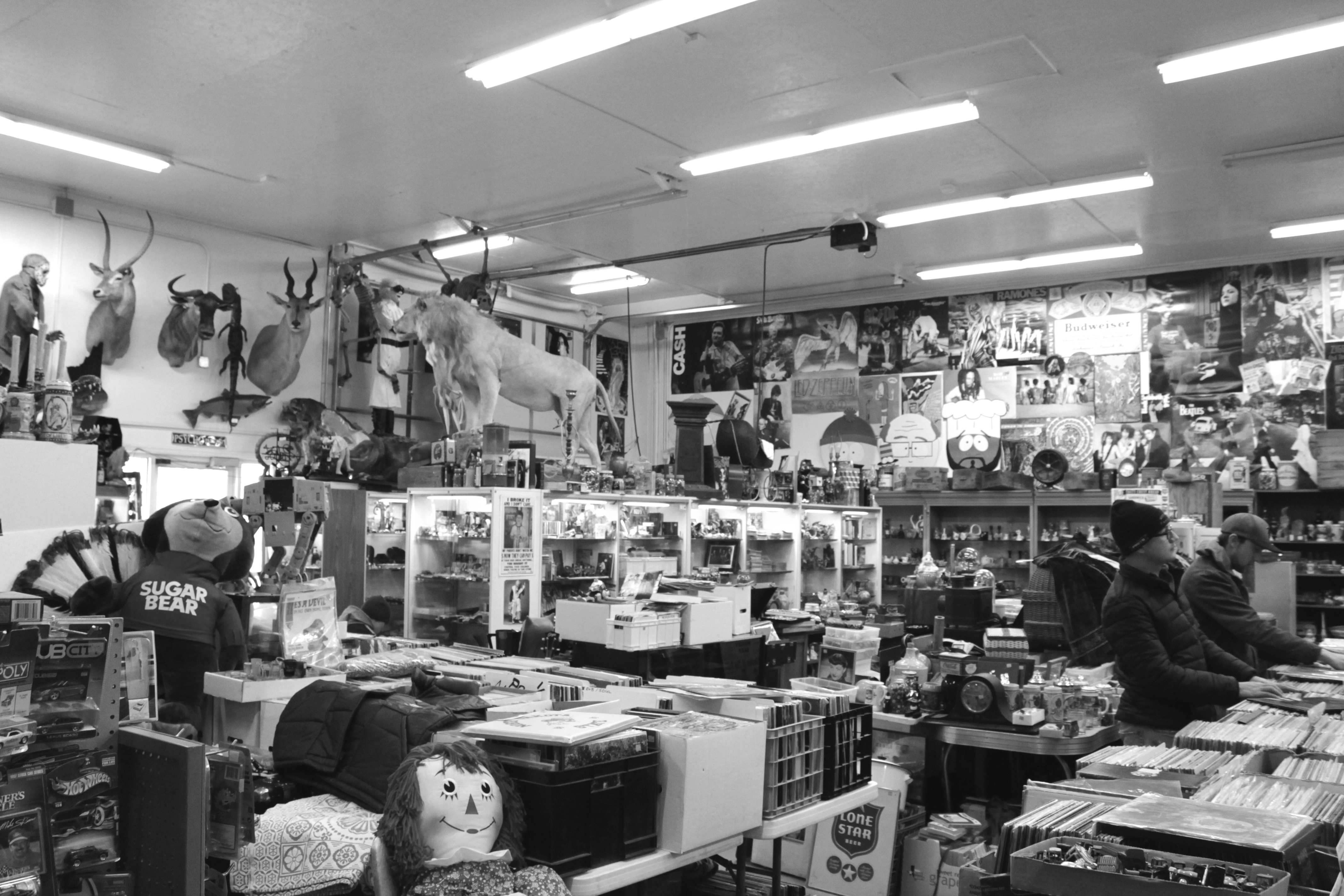 A collection of vintage, collectable, valuable and comparable items

Phat Kat is not the usual boutique. Interspersed between antique collections of watches, cameras, collectable toys and posters and old books are taxidermied animals and broken dolls. The boutiques biggest attraction, however, is not its oddities but the largest vinyl selection in Fargo.

Shannon Grindberg, owner of Phat Kat, opened the store on Jan. 1 in 2010. Grindberg has always been into buying antique items for sale and as his hobby continued to grow, he opened up the store. The space filled up with classic and unusual items including the skeleton from “The Odd Fellows”, a full mounted hyena, ancient books, vibrant and diverse posters and various other items.

“We don’t do any doilies or linens,” Grindberg said. “I just kind of do what I like and what appeals to other people.”

“This store is like going on an adventure. You never know what you’ll find. You could spend two hours in there and still see something else you didn’t notice the first time you looked at that shelf. Make sure you have lots of time and a pocket full of cash because you will want everything. Great for those who love pop culture, records, unique and odd collectibles and just awesome vintage stuff.”

Phat Kat used to sell furniture until Grindberg noticed the renewed popularity with vinyl records and built his selection to fill more than half the store.

“It just continued to grow,” Grindberg said. “I saw vinyl taking over and it’s better than selling furniture.”

Everything in the store is purchased by Grindberg to sell. Most of the store’s items are offered at comparable and negotiable prices. Grindberg tries to select one of kind, vintage items, especially for his record collection. Grindberg thinks the uniqueness of the store doesn’t just lie in what the items are, but that they can’t be replicated. His items are not found on corporate shelves where mass amounts of the same product can be purchased.

“It’s like that sign says out there,” Grindberg said as he pointed at the store sign outside. “Where are you going to find it? You are not going to go to Walmart and find it. I specialize in vintage and i don’t buy anything new, it’s all stuff that everyone else has owned.”

Selling items that people have already owned can be a challenge, because it’s stuff nobody needs. However, according to Grindberg, his vintage items have a special value, because of the history of their previous ownership. They were once items someone else cherished.

Grindberg has been in the boutique business for seven years, and while his home-life does not match his eclectic style, his work sticks with him after business hours.

“I like to keep things clean, modern and contemporary,” Grindberg said. “But my home is always full of work.”

Grindberg doesn’t mind that his work follows him home, because he is doing work that he loves.

“Who wouldn’t want to work for themselves? That’s like the American dream to be self-sustaining”

2016-12-01
Previous Post: Gregoire sees conference championship in the future for women’s hockey team
Next Post: From Concordia to South Africa and back