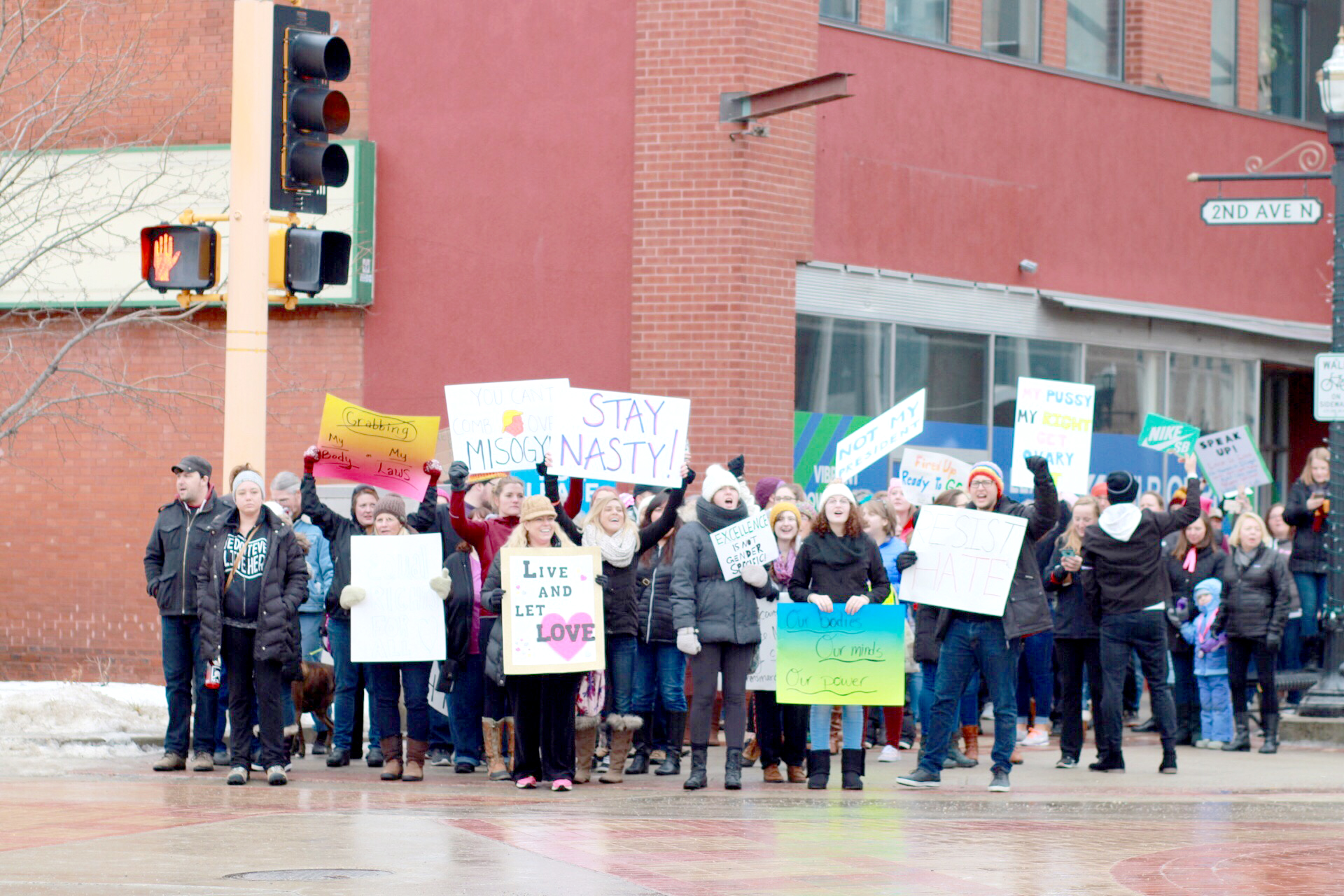 In a nation divided by a bitter election season and the recent inauguration of President Donald J. Trump, millions took to the streets Saturday with chants of hope, anger, and unity.

The Women’s March on Washington, which began as a single event in the nation’s capital, quickly grew into a global phenomenon with the help of the Internet and clusters of passionate grassroots organizers. Marchers gathered in cities large and small — from Boston to Berlin, London to Las Vegas, and even to Fargo. An estimated 3.7 million people marched in America alone, making it the largest single-day protest in American history.

Inspired by stories of the sister marches being organized around the world, local realtor Maren Day Woods began coordinating and publicizing the Fargo march less than two weeks before it was to be held. Living in a state that voted 63 percent red in the 2016 presidential election, Woods had modest hopes for the event’s attendance.

By Woods’s count, the number ended up being closer to 3,000. Despite the march’s name, the crowd was composed of people of all genders and ages.

Woods explained that, while the international marches were motivated by the election of Donald Trump and intentionally held the day after his inauguration, they were not held in protest against the president. Rather, they were held in support of democracy, solidarity and civil rights — causes, she said, that are particularly important in a place like North Dakota.

“This is way bigger than Donald Trump,” Woods said. “When you bring people together of similar beliefs, then it makes other people feel safer to come into the fold, especially if you live in a more conservative part of the world.”

Every person in attendance had their own reason for marching. For Woods, the motivation for bringing the Women’s March to Fargo was personal.

“My mom has been a feminist my whole life, and it was a hard loss for her to not get to see the first woman President,” she said. “It’s been a tough time for so many people, so I just really felt like, if I could give people an opportunity to express how they feel and stand up for what they believe, then I think it would be worth it.”

Some marched for religious freedom and LGBTQIA rights. Others marched against police brutality, the Dakota Access Oil Pipeline, and the Trump administration’s threat to repeal the Affordable Care Act. When asked why she marched, Fargo resident and long-time reproductive rights advocate Julia Parr responded:

“Because I have a vagina and so does my daughter.”

Luther Aadland, a 1979 Concordia graduate and river scientist with the Minnesota Department of Natural Resources, said he marched for the environment.

“I’m bothered by the hiding of science and the hiding of truth,” Aadland said. “We need to be heard. People need to know that we still believe in science, in compassion, in equality.”

The crowd then took to the sidewalks of Broadway, many of them wearing hot pink cat-eared “pussyhats” and carrying handmade signs bearing messages like “Our Rights and Bodies Are Not Up For Grabs,” “We Will Not Go Quietly Back to the 1950s” and “Build Bridges Not Walls.” Shouts of “Love trumps hate” and “When they go low, we go high” echoed from both sides of the street. Some passing drivers honked their solidarity, while others waved American flags and raised fists from their open windows.

Marchers were urged to keep the event peaceful by ignoring counter protesters and removing any unnecessary poles or sticks from their signs. With the exception of one pickup truck which was bedecked with Confederate flags and driven down Broadway, the march went on without hostility.

The march ended back at Revland Gallery, where, in true North Dakota fashion, marchers warmed up over cookies and paper cups of coffee. But Woods hopes that the energy sparked by the Women’s March on Washington and its sister marches around the world will ignite a movement that will continue through the next four years and beyond — a hope, she said, that was only strengthened by the number of children she saw at Saturday’s march, riding on the shoulders of their parents and carrying signs of their own creation.

“We’re raising a whole generation of people who don’t notice the color of somebody’s skin, who don’t care who somebody loves, and they certainly don’t feel like they have the right to tell somebody who they have a right to love,” Woods said.