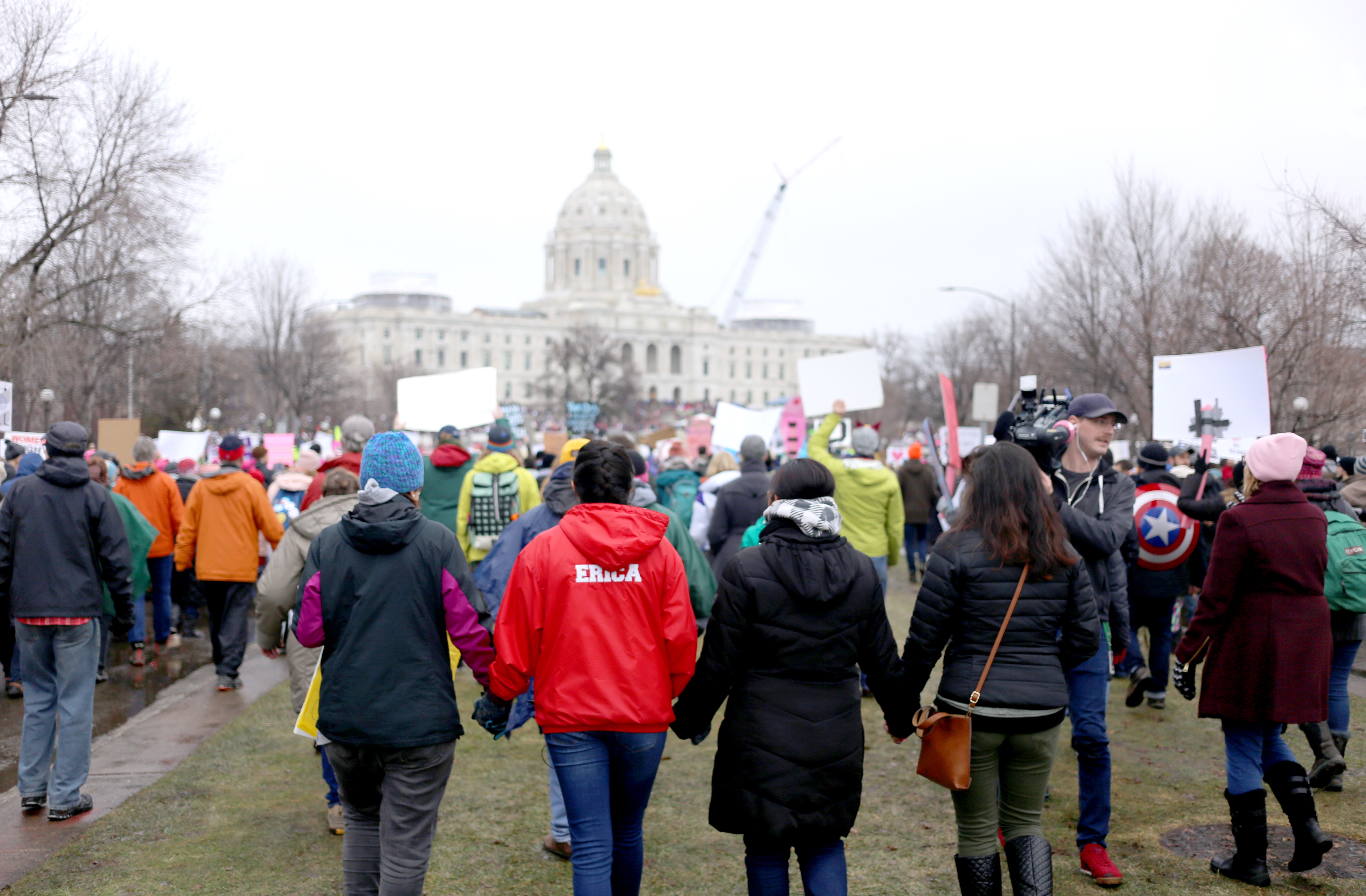 Every Green line on the metro transit station squished hundreds of people in Minneapolis last Saturday morning. People wearing pink, wearing pussy hats and holding signs poured out of the buses, metro lines and taxis at St. Paul College. Individuals joined the mass at the college and marched. People held signs that read, “The place for women is in the resistance” with an image of Princess Leia. One man held a sign that said, “This gay man is fighting for vaginas.” Others addressed protecting the earth, believing in climate change. Many people wore “Todos son bienvenidos aquí” stickers. A mom marched with four girls, about six or seven years old, all holding hands while going through the crowd, shouting, “We are women and we can be nasty!” Men, women, daughters, sons, friends, grandmothers, grandfathers, students, parents and dogs marched: Over 100,000 people attended the Women’s March on Washington at St. Paul, according to the Star Tribune. Two different student groups, about 30 Cobbers had the opportunity to take part in history at the state’s capitol.

Two van-fuls of Concordia students left at 4:45 a.m. on Saturday to attend the Women’s March on Washington in St. Paul. Senior Marah Evans and Junior Lacy Tooker-Kirkevold led the trip.

Evans made the decision on Jan. 18, three days before the march, that she wanted to attend the march in St. Paul.

“It’s Minnesota’s capitol, so it was important for me because they are people there who can actually change things,” Evans said. “The speakers at the rally like Ilhan Omar and Patricia Torres Ray were people I wanted to hear from. The amount of people who were planning on going, and the feeling of support that I knew and others would have seeing others dedicated to the cause. There’s something to be said about hundreds of thousands of people who joined in solidarity for peaceful walking to invoke change.”

With no vehicle of her own, Evans had to seek transportation. First, she posted in the Concordia Ride Board on Facebook, receiving a comment from Tooker-Kirkevold that she was driving to the cities in her personal van, and had one spot left. Evans, thankful that she had some sort of ride, wanted to extend the opportunity to more students. She had the idea of the possibility to retrieve a van from Transportation Services. To obtain a vehicle from Transportation Services, the department needs three business days to process the vehicle reservation, and 10 days before the departure date to confirm the reservation, so about two week process prior to the departure date, according to Transportation Services’s page on Concordia’s website. That did not stop Evans though.

“I kept trying because I knew that it was going to be something powerful, and the importance of it,” Evans said. “I was really hoping that I could convey that importance to the people who could help me get that transportation.”

She reached out to Brent Johnson, assistant director of student engagement, and asked for help, since she needed an advisor and an organization or department to support the trip. He was more than willing to help make her goal happen.

“Our office wants to help students pursue their interests outside of the classroom,” Johnson said. “A lot of the time, that looks like student organizations and structured on-campus involvement, but sometimes that doesn’t look that way. Sometimes it looks like a student passionate about a cause, like in this case, and in those cases, we are hopefully able to help them pursue those passions.”

“We are lucky on this campus to have services on this campus that are willing to be flexible and work with students to accommodate needs,” Johnson said. “This happened to be a case where Transportation Services had a vehicle available and it worked out.”

“My initial reaction was both excitement and nervousness,” Tooker-Kirkevold said. “I was really excited to take as more people down to this historic event, but with such large crowds it definitely made me nervous of losing people.”

The group left early Saturday morning, making it to the cities about 9:00 a.m. Tooker-Kirkevold’s After figuring out how to find a spot on the overflowing metro line (because the transit station did not predict that the march was going to be that busy and did not have enough lines out), the group made it to the march. Joining the tens of thousands of other Minnesotans marching for the same rights created an image that the students will never forget.

“The crowd was very calm. People were very kind. I felt very relaxed, and at ease,” Evans said. “The fact that everyone was there saying, ‘We accept you for who you are, we love you for who you are, and you’re not in this alone’ was incredible. To think that everyone there had a different reason, a different experience in their life that brought them to that place was really cool.”

The march started at St. Paul College and ended at the state capitol. At the end of the march, there was a rally on the front steps of Minnesota’s State Capitol. During the rally, several government officials spoke like House Representative Ilhan Omar, the first Somali-American legislator to be elected in the United States, and Senator Patricia Torres Ray, the first hispanic woman to serve the Minnesota senate.

Another group of Cobbers made their way to the capital; eight students who participated in the study abroad program to India in the fall of 2015 went down to the Gustavus Adolphus College to meet up with their friends from the program. When the group had originally planned the reunion, the march in Fargo had not been planned yet, so attending the march in St. Paul worked out better, according to senior Grete Oanes, a student who went on the trip. Combining the two events in one trip worked out well.

“It is hard to find words for what I felt at the march,” Oanes said in an email. “After we had marched to the capitol and before there were any speakers, we observed a moment of silence. It was a minute long and was taking place at all the marches around the nation and world. As I stood there holding my neighbor’s hands with our arms raised in the air, I felt hope. It was such a powerful moment, tears were streaming down my face and I was just trying to take in what this march meant to me and everyone else that was there. This moment was energizing and grounding. It was a reminder that I am not alone, millions of others are there to support me and I them.”

The group ran into the same problem with utilizing the thronged metro transit, but instead of letting that diminish their experience, they learned the power of humanity in dire situations. Senior Katie Anderson believed riding the transit had as much of an impact on her as did the march itself.

“On the ride, my arm was twisted and I could barely breath–so many people were on their way to the march,” Anderson said in an email. “Despite the discomfort, my journey was filled with energy and hope through song. Complete strangers spent the entire ride to the St. Paul campus singing songs of peace. The physical march was equally amazing. There were so many moments I teared up. I truly felt a part of something much bigger than myself. It is a beautiful thing to see people come together, with love and justice as the common denominator.”

Evans received lots of positive feedback from the students who joined her on the trip, reciting their appreciation for having the chance to be a part of history.

“Not only for myself, but for the comments that I got from the people who were on the trip expressed deep gratitude for the opportunity and for the event itself,” Evans said. “When we hear about this in the future, I can say, ‘I was there. I was a part of that. I got to hear the first Somali-American representative speak.’ I think for a lot of people in the vans, I think it meant a lot, more than I thought it was going to.”

While the march allowed students to begin in a movement, students should continue looking for avenues to expand on their experiences from the event, Oanes said.

“This march and those held around the world are a good start, but we have to continue to work everyday to ensure that marginalized communities are not oppressed through the system,” Oanes said.

2017-01-26
Previous Post: Basketball is a family affair for the Wolhowes
Next Post: Fargo: Concordia Students take part in Women’s March on Washington