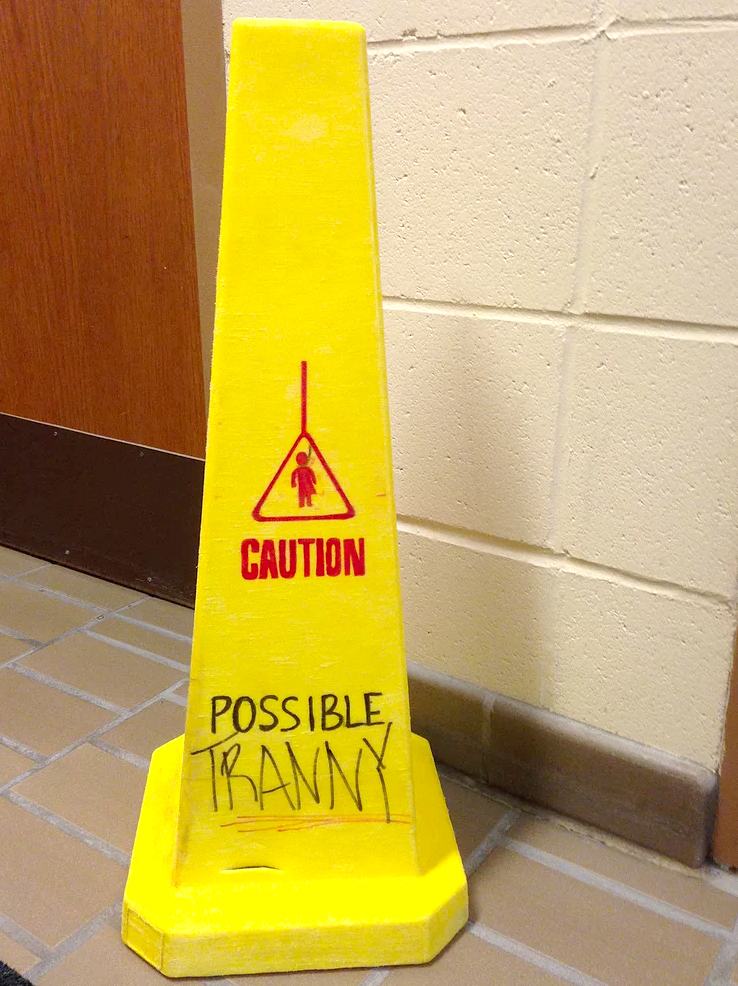 There has always been great controversy surrounding guerrilla art, a street art movement that focuses on causing thought and action in its audience. Although this art form often impacts its viewers positively, it can also be rather jarring and even offensive.

Jack Hinz, a graphic design and theatre major and senior at Concordia, recently created his own piece of guerrilla art. This project has caused controversy from the first moment it went on display.

Hinz describes the inspiration behind this project as a class-assignment-turned-social-activism. His assignment, for Three Dimensional Foundations class, was to construct a piece of art that had social significance, using a simple everyday object. A friend had given him a wet floor sign out of the blue, so he decided to use it for this project.

“Originally, I was going to have it shooting flames or something,” Hinz said. “But my professor reminded me that it needed to have something to do with a social cause. I connected the wet floor sign to bathrooms, and bathrooms to the Transgender Bathroom Bills that are happening right now, and that’s how it happened.”

Hinz is a transgender man — one of only a handful of trans people on campus — which made the project very personal for him. Bathroom Bills are currently being introduced in several states such as Minnesota and South Dakota (per the National Conference of State Legislatures). Although the language in the bills varies from state to state, they all suggest that public restrooms could be safer if people were required to use the bathroom that corresponds with their “biological sex,” according to the National Conference of State Legislatures. The goal is to stop “men who dress like women” from entering women’s bathrooms and, presumably, attacking unsuspecting women and girls.

Hinz’s project, entitled “Bathroom Hate,” is meant to call out the injustice and ignorance of these bills. Like many transgender people, Hinz is hurt and angry that folks would wrongfully assume all people like him are dangerous predators. It’s this anger that caused him to purposefully make the project as controversial as he did.

“Bathroom Hate” was originally meant to be on display outside of an Olin Hall restroom, as if it were meant to be there. Hinz carved away the lettering from the outside of the sign that read, “CAUTION: WET FLOOR,” and painted in its place the words, “CAUTION: POSSIBLE TRANNY.” Above the word “CAUTION” is the symbol for an all-gender bathroom hanging from a noose. It was so controversial that it was taken down no less than three times by various staff and students.

One of these students was Sarah Kemp, a senior at Concordia majoring in communications and political science. She, like many people who encountered Hinz’s project, interpreted it not as art, but as real, hateful graffiti targeted at trans people.

Kemp was walking through the skyway between the theatre and Olin when she saw it and thought it was a normal sign at first, until she saw the slur and the hanging person drawn on it.

“When I realized what it was, I was horrified. I was shocked to see it, and I immediately thought no one should have to see it, God forbid a trans person,” Kemp said.

Kemp went directly to the nearest professor she knew — Kirsten Theye, associate professor of communications. Upon seeing the sign, Theye took it to her office, assuring Kemp that she’d done the right thing.

“My first instinct was to document it with my camera and then get rid of it,” said Dr. Theye in an email correspondence. “I was really struggling with the idea that something like this would happen at Concordia, so on a hunch, I stopped by the art department to ask if it was something that they recognized, and they did.”

Kemp later received a message from Theye explaining that the sign was just an art project and not anything to worry about. The project was permitted to remain in the skyway on display.

Guerrilla art is certainly an impactful way to deliver a message, but according to Kemp, messages like this can be easily misconstrued.

“It [‘Bathroom Hate’] makes a really good point, and I think people need to be aware of that point,” Kemp said. “But I still wish there had been some kind of tile with an explanation near it. It would be terrible if someone took the message literally, and decided to put up more hateful graffiti.”

That being said, Kemp also understands that sometimes putting up a description near a piece of art can diminish the art’s value. Guerrilla art is meant to shock people, and a neatly laminated description would certainly make “Bathroom Hate” a lot less jarring.

When asked about her stance on the art form, Dr. Theye thought guerilla art posed an important place in expression, including in a political context.

“In general, I support guerilla art and many forms of creative protest — I think they are critical for our democracy,” Dr. Theye said.

Hinz recently hosted a concurrent session for MLK Jr. Day about “Bathroom Hate,” and he’s taking it to the Gender Matters Expo on Feb. 9. He hopes that his project will help start a discussion about the Bathroom Bills and the transgender community as a whole. When asked what his final thoughts are on the controversy, Hinz replied that he’d like the people who endorse these Bathroom Bills to walk a mile in a trans person’s shoes. He finished with the phrase that’s become very common in the trans community:

2017-02-02
Previous Post: Track welcomes new coach
Next Post: Understanding what it means to be a U.S. citizen