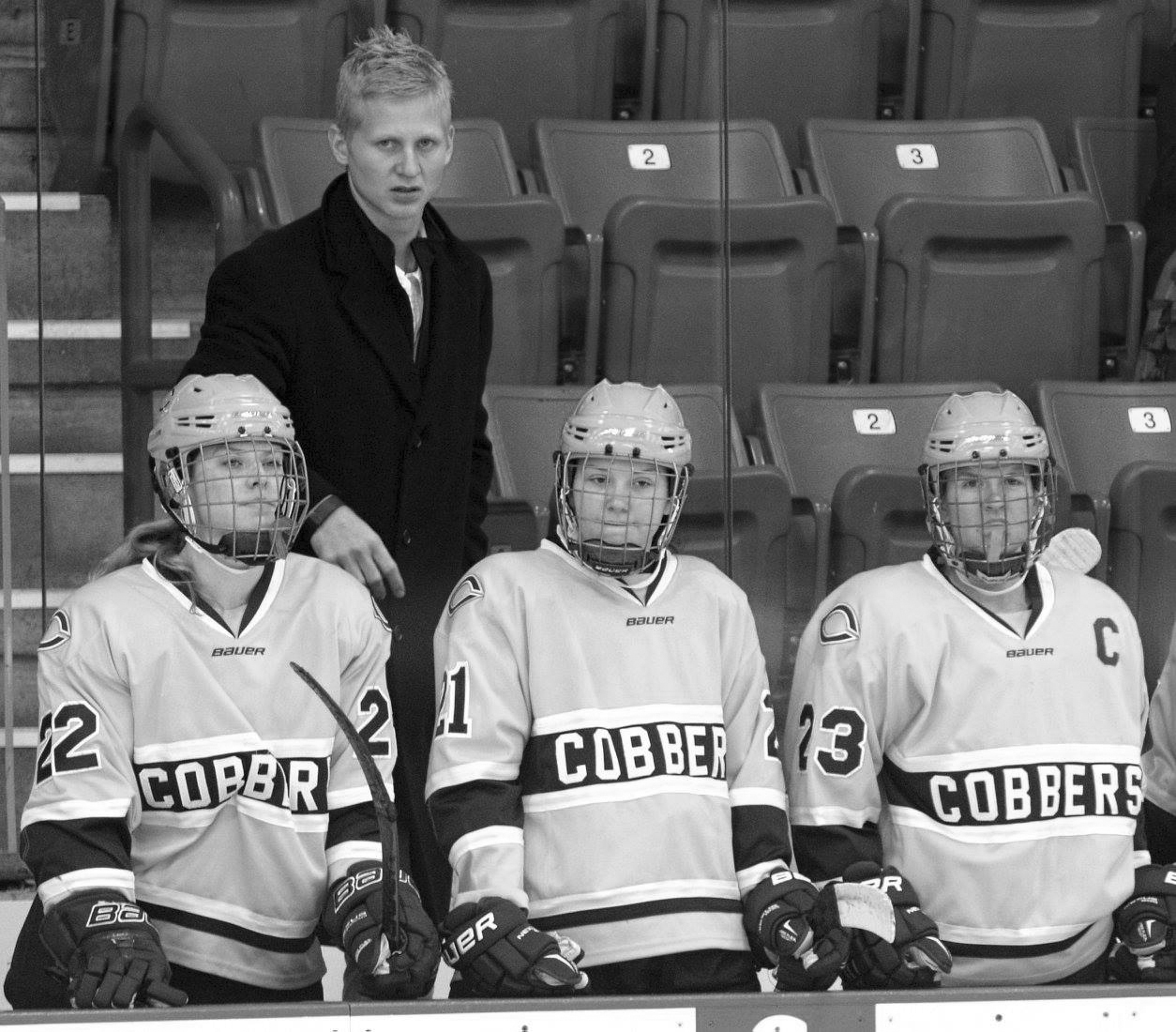 Lee, who was drafted ninth overall in the 2005 National Hockey League draft, is in his second season as an assistant coach for the Concordia Cobbers Women’s hockey team. He is a former defenseman for the Ottowa Senators and Tampa Bay Lighting, and retired in 2014 as a result of complications from osteochondritis dissecans, a condition in which cartilage in a joint dies due to a lack of blood flow to the area. Even though his injuries shortened his career, Lee is thankful for the opportunity he was given.

“Playing in the NHL everyday was a dream of mine,” Lee said. “Even the bad days were pretty good and I’m thankful that I got that opportunity.”

Even though he can no longer adhere to the strict training regime he was once accustomed to, Lee says he believes staying fit is important and he tries to start everyday with a workout.

“I can’t jog anymore or squat or do lunges, but I can bike and skate and do some lifts,” Lee said.

After Lee’s NHL career ended, he didn’t watch hockey for over a year. His sabbatical from the game ended last year when he accepted an assistant position with the Concordia College Women’s hockey team. Hannah Johnston, one of last year’s graduating seniors from the team, said it was easy to adapt and connect with Lee.

“We didn’t know Brian very well so we didn’t know what we could say around him,” Johnston said. “So I asked him if he was okay with sarcasm and he burst out laughing and we hit it off since that moment.”

Despite Lee’s physical limitations, he shows a great deal of skill when demonstrating drills or competing with the girls on the Concordia team. Chelsey Petrich, a senior defenseman, gets to see Lee’s skills on full display every day because he primarily works with the defenseman.

“He takes like four strides and he’s down the ice past everyone,” Petrich said. “He’s always pulling off some unreal move in our shootouts.”

However, as a coach, the amount of skill that Lee possesses is irrelevant. Skill is nontransferable. It is the result of dedication and persistence, but knowledge can be passed on. According to those around him, hockey knowledge is something that Lee has an abundance of, and heach coach Jason Gregoire makes use of it. Whether it’s pregame preparation or post game stretching, Gregoire is constantly communicating with Lee about little changes that can be made.

“He has helped on the nutrition side of it,” Gregoire said. “There’s some pregame warmup stuff that he has implemented. And there’s cool down stuff after the game that we’ve never done before, but stuff they do in the NHL that just helps to get the legs ready for the next day.”

Lee, like many coaches, believes in the importance of small details. It is in the finer points of the game where he has had the most impact so far in his young coaching career.

While a lot of the detail Lee offers are from his NHL playing days, he only directly addresses those days when pressed. Still, players who ask him questions are floored when he mentions Steven Stamkos, his former teammate, or Sidney Crosby and Alexander Ovechkin, just a couple of the legends that he played against. It’s players like Stamkos and Daniel Alfredsson, a teammate Lee had in Ottawa, that opened up Lee’s eyes to the amount of work that came with an NHL career.

“You always think you’re working hard in high school or college but when I got to the NHL, I saw how hard guys worked,” Lee said. “I wish I could’ve seen that sooner.”

Although Lee refrained from watching hockey for about a year after his retirement, he is constantly stressing the importance of watching NHL games to his players. He believes that no matter someone’s skill level, he or she can’t play the game of hockey at a high level unless they can think the game of hockey at a high level. In order to help his new team achieve and improve, Lee uses one of his contacts that he picked up during his time in the NHL.

“He is still buddies with the Tampa Bay Lightning video coach,” Gregoire said. “He’ll have him send us clips.”

Gregoire was happy to show a film package that was full of clips showing proper stick on stick checking, something that he and Lee know is important, especially in the women’s game where open ice checking is not allowed.

Although many of the changes that Lee has made are positive, some were unsettling for his players at the beginning. He teaches his defenseman to try and step up and take the puck from the opposing team before they reach the redline. For many of the women, this was a more aggressive style than they were used to.

“It was really uncomfortable at first,” Petrich said. “If someone is really fast, it can be pretty easy to get burnt, so there was a bit of an adjustment period to figure out the middle ground of having a good gap but not being so aggressive that they can just skate around you.”

Over the course of the last two seasons, they have adjusted. With eight games remaining in the regular season, they are tied for first in the conference with a conference record of 8-2. If they end up winning the conference, it will be the first conference championship for the women’s hockey team in Concordia’s history.

Lee continues to open doors for his players through his shared knowledge of the game. Gregoire believes that Lee’s continued involvement in the game is the result of a love of working with players who have a willingness and passion for learning the game. Although Lee is already training in as a medical sales rep and will be receiving his degree in university studies from NDSU this spring, Gregoire sees Lee sticking with coaching for awhile.

“The girls respond to him and I think he sees the type of impact he can make,” Gregoire said. “It’s kind of the addicting part about coaching and he’s all in now.”