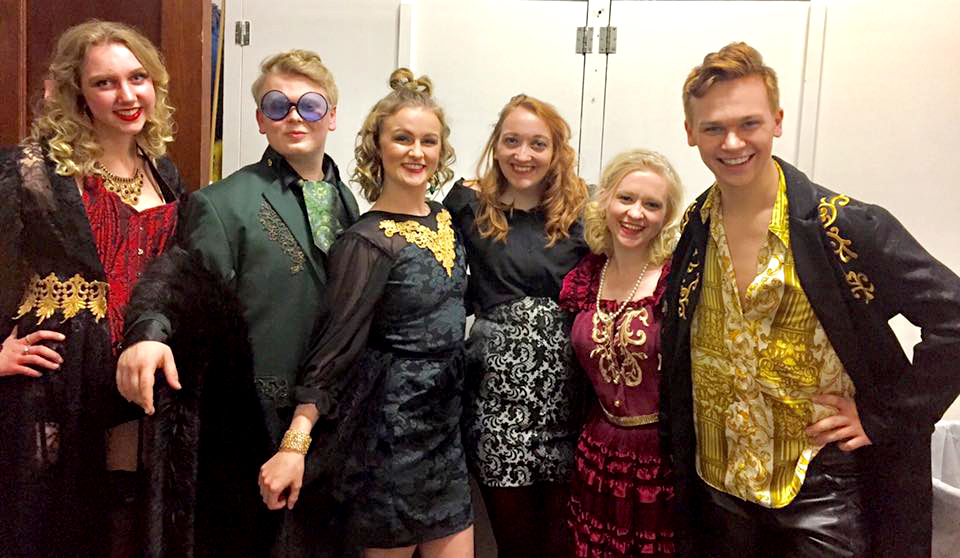 Eighteen theatre students participated at the Kennedy Center American College Theater Festival last week where students made it into the finals, and one won it all.

Senior Melissa Thurn won first place in the National Costume Design Award for the costumes she designed for “The Country Wife.” She showcased her renderings, research, production photos, costumes and fabrics while competing with students from Minnesota, Iowa, South Dakota, North Dakota, Kansas and Missouri. Thurn also had the opportunity to show her work in a costume parade, where she dressed students to model five of her best costumes.

“Watching them [students] model my costumes on stage from the audience was incredible because I was able to hear the audience’s reactions,” Thurn said in an email. “I heard gasps, the oohs and aahs, from an audience of approximately 1,300 people. It was great to see that my work was seen as unexpected and good by all of those people.”

Thurn could not look at the projection screen during the award ceremony when it was time to present the winners. It didn’t matter though.

“But then it happened. ‘And the recipient for National Costume Design from CONCORDIA COLL–’ that’s about all I could hear them say, because as soon as the announcer got that far everyone around me jumped up screaming started to grab and hug me,” Thurn said. “It was entirely surreal so I teared up a little. Looking at the faces from all my friends, classmates, and professors surrounding me I could see how genuine their support and happiness was for me. Even from my closest friends I was taken aback by their look of deep love and pride.”

By winning first place, Thurn has an all-expense-paid trip to Washington D.C. in April to attend the national KCACTF festival at the Kennedy Center.

“This [award] is a validation of my career to my family, as my entire college experience I’ve had family tell me that I was wasting my talent, time and money by going into theatre,” Thurn said. “They always said that I should be a teacher or a doctor instead of fooling around in theatre where I won’t get a job or I’ll just be a starving artist. Now I’ll be at the Kennedy Center meeting, networking, and learning from the industry’s top professionals. This is really just a clear message that I made the right choice to pursue what I love doing, and that all the stress and lack of sleep making that show was worth it.”

Other students moved far in the competition as well. In the Irene Ryan competition, 326 pairs existed in the beginning, with 64 semifinalists and 16 finalists. Senior Justin Odney and his partner junior Tyler Eliason and junior Berit Johnson and partner sophomore Lewis Johnson made it to the semifinals. Senior Hannah Kulus and partner junior Nick Brandt made it to the finals. Kulus and Brandt had the opportunity to perform in front of an audience that had over 1,000 people attending.

“I was a little nervous, but mostly excited to share the art I had worked incredibly hard on with a group of people who share that love for theatre,” Kulus said in an email.

Senior Olivia Berglund and sophomore Josh Palmquist were selected to partake in the Musical Theatre Intensive dance workshop where they worked with a professional choreographer. Other students partook in auditions for professional summer stock theatres, who all earned callbacks. Within the next month, these students will receive information about contract offers.

David Wintersteen, director of theatre, attended the festival and was happy to see his students achieve success.

“It is great that our students have the opportunity to show their work, get critical feedback, and are better prepared to hone their crafts,” Wintersteen said in an email. “While I’m proud of the accomplishments of our students, I’m also impressed by their support for each other, and their engagement with opportunities to learn outside the classroom.”