‘This is my town, I belong here’ 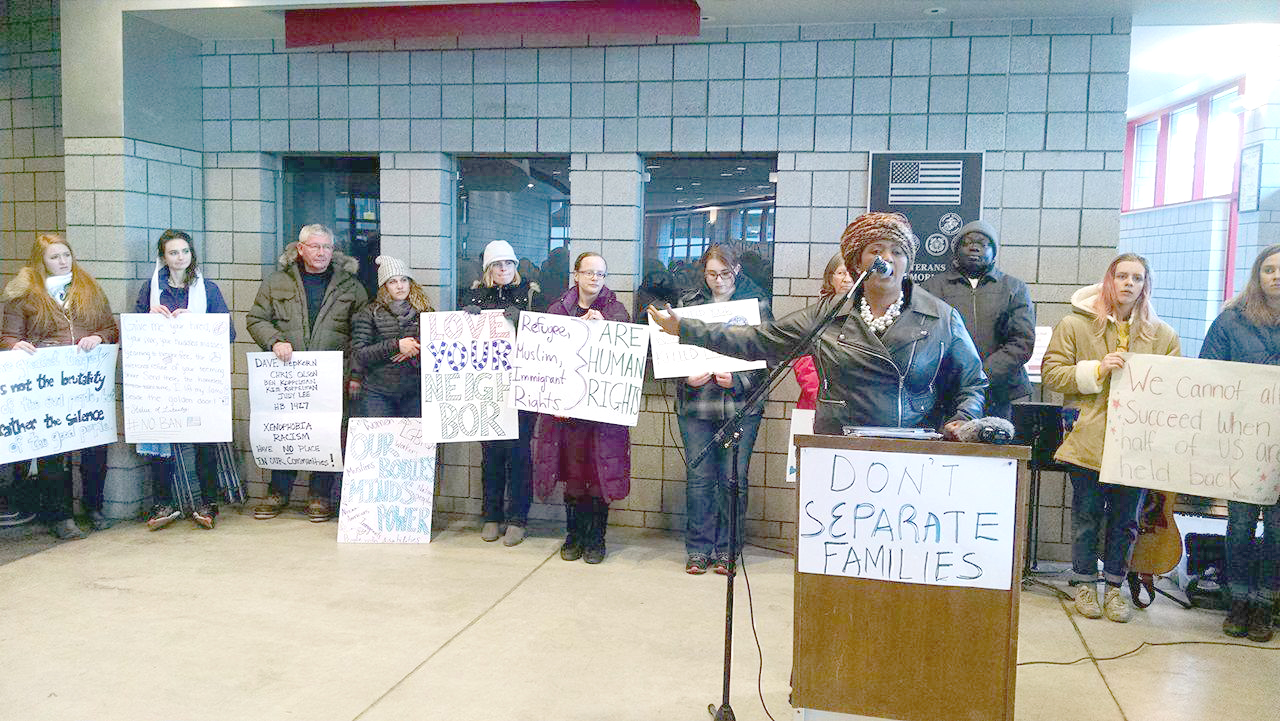 Fargo rallies against HB 1427 to support refugees and New Americans

“Refugees of many faith and ethnicities are being welcomed here and they are integrating successfully and contributing economically, civically and socially in their new homes,” said Hakun Abdullahi, member of Afro American Development Association and main speaker at the rally.

“Refugees are our coworkers, friends, neighbors, business owners, community leaders and proud American citizen and voters. We oppose any proposal or statement calling a ban on refugees as well as discrimination based on any religion or nationality; as a nation founded on by refugees and immigrant these type of policy dishonor our policies beliefs and values,” Abdullahi said.

Many community members and Concordia College students, professors and staff attended a rally at the Fargo Civic center on Thursday Feb. 2, to show their support for their immigrant and refugee community members, loved ones and friends. Many speakers from the Afro American Development Association, Islamic Services Association and local New Americans came up to speak. The room was filled with passionate friends clutching inspirational signs, chanting “This is what democracy looks like,” and “Refugees prosper, Fargo prospers.”

According to the latest HB 1427 bill text on legis.nd.gov introduced on Jan. 16, 2017, the bill is to “provide determination of refugee absorptive capacity and to define refugee resettlement organization duties.”

According to the bill text and Professor Michael Bath, head of the political science department, the absorptive capacity is referring to the state’s capacity to absorb the costs of resettling refugees in various agencies and services ranging from child care and education to health care, interpreter services and law enforcement.

“If it is determined that the state’s social services and nonprofit sectors that help settle refugees and immigrants are not up to the task, the state would be empowered to limit the number of refugees who are settled here,” Bath said in his understanding of the bill.

Bath finds the timing of the bill to be interesting. According to Bath, North Dakota is near the top for numbers of refugees resettled here per capita; the raw number of resettlement has noticeably lowered since the 1990s.

“That makes me wonder, why this law? Why now?” Bath said.

In agreement with most of Concordia’s perspective, Bath is not a big supporter of the message HB 1427 puts forth. It sends forth a message that the community may not be as welcoming to refugees as they once were.

“The bill is predicated on the idea that there are costs to settling refugees and it doesn’t take into consideration what refugees can bring to the table,” Bath said.

According to senior Lacy Tooker-Kirkevold, the HB 1427 bill unfairly targets immigrants and refugees based off of stereotypical statements.

“The bill directly targets immigrants even with visas, trying to stop refugee resettlement in North Dakota,” Tooker-Kirkevold said. “It only talks about the so-called negatives of having refugees in North Dakota and it doesn’t bring up the cultural, economic and social positives of refugees in the state. It has one view people feel strongly about, it doesn’t have actual facts in there.”

Some of these stereotypes that Tooker-Kirkevold pointed out include the stereotype that refugees increase crime, and destabilize the economy and community.

Abdullahi recognized the same allegedly false reasonings in the bill as well and took a stand against it.

“We will not tolerate intolerance,” Abdullahi said. “We are here and we will not be silenced.”

Sarah Ferguson, senior and founder of the Concordia Resistance Action Team, stands up in support of New Americans and refugees. She attended the rally in hopes of showing solidarity for her New American community members and friends.

“I went to the rally because I believe in opposing 1427. All New Americans who have been here for the past year or the past 20 years just want to contribute to the community and live their lives,” Ferguson said. “I want to advocate for people and welcome them and support them. New Americans bring diversity in knowledge and cultural sharing.”

Ferguson thinks the state’s regulation and tracking of New Americans is blatantly unfair and harmful to the community.

“The harsher immigrant and refugee police is to make the state as secure as possible but it is treating them like they are already criminals,” Ferguson said. “The bill is just putting a target on [New Americans] when they are here and they should be welcomed.”

Fowzia Adde, one of the speakers at the rally and the executive director of Immigrant Development Center, spoke out against the bill, stating that refugees and immigrants had paid their dues. Now it is time for them to stand up and unite against a bill that she believes ignores the hard work and commitment they have dedicated to Fargo.

Adde reached out to the crowd and called them survivors. She told them, “You have done it. You got the citizenship and you passed the test.” With the little education they had, they earned their way through the community and fought hard for their livelihood. Adde said now, it is time to recall that survivor and to fight for their rights as citizens and community members.

“I will call this project ‘project wake up call,’” Adde said. “What we know about refugee community is that we take the pain when it comes. We know how to survive. You are a citizen. You paid your dues in Fargo. You did everything you can. Wake up my friend. This is project wake up call.”

Rally participants and refugee and immigrant leaders of Fargo are not the only ones fighting against this legislation. The Concordia Resistance Action Team is also making efforts to not only fight HB 1427, but other legislation they feel violate the human rights of this nation.

The Concordia Resistance Action Team, founded by Ferguson and Marah Evans, is a Facebook group that provides resources and advertises events that allow Concordia students to take action in voicing their values and beliefs to their local legislators and congresspeople. Tooker-Kirkevold is one of many students, among faculty and staff, who has been invited to the group. She has helped organize events and share information on the site.

Ferguson founded the page based off of a research project in her Global Studies Senior Seminar class. She and three other students worked with the Fargo Moorhead Refugee Advisory Council which started after the 1427 bill was proposed. The council aims to bring New American communities together including Sudanese, Somali and Bhutanese communities. Ferguson’s role was advocating events, getting people aware of the group and educating on how to support New Americans.

Ferguson then started to get questions from other students who were concerned about the bill and wanted to know how they could help.

“Students were coming to me for resources on how they can get involved with different political issues,” Ferguson said. “So we wanted to create one place where everyone can go for resources, events, donations and organizations.”

“You need to realize that most people in the group don’t view what’s happening as a political issue, but as a human rights issue,” Evans said. “It’s not about who’s Democrat or Republican. The majority that I know are … just worried about their friends and neighbors who are afraid.”

So far, according to Tooker-Kirkevold, the Facebook group has been working on calling and writing to legislators about the 1427 bill and other legislation that has passed under President Trump’s administration.

“Every day there are hundreds of bills being passed,” Tooker-Kirkevold said. “We share ones we think are not right and that are unconstitutional or against our beliefs a Americans. We are trying to be huge backboard for information to be passed back and forth.”

According to Ferguson, the group also provided a link where student could donate to transportation services for New Americans to travel t Bismarck on Feb. 3, where legislators were voting on the bill.

After the hearing, as proposed be congresswomen, Kathy Hogan an Mary Schneider, HB 1427 bill was amended into an interim study of various aspects of refugee resettlement in North Dakota. This mean the bill will study the costs of the refugee resettlement program and will also include the benefits to determine any regulation on resettlement. This is according to a Facebook post from FM Area Refuge Advisory, which hosted the rally and a recent article printed in the Forum.

Because of this victory and the power of standing up for the values, beliefs and human rights of all Americans, Tooker-Kirkevol thinks it’s important to continuously take action. No matter what the nay sayers may say.

“We need to continue to rise and take action and make a change, because people often say we are to young, we are not educated enough or don’t have world experience, Tooker-Kirkevold said. “But we need to show we are educated, articulate and make a difference. Sometime we need to shout into the void and wait to see what comes back at us.”

At the rally, Adde said that when people are divided, the wolf wi come and eat them one by one. She stressed that in times like this, the community needs to see each other as equals and come together as one.

“When your fellow refugees an immigrants are put down, it’s no about them. It’s about you. Let come together… at one table an participate in our community and change our political landscape in Fargo,” Adde said. “We will have voice. We are a part of this community and now we are demanding for understanding and a willingness to share opportunities in the community.”