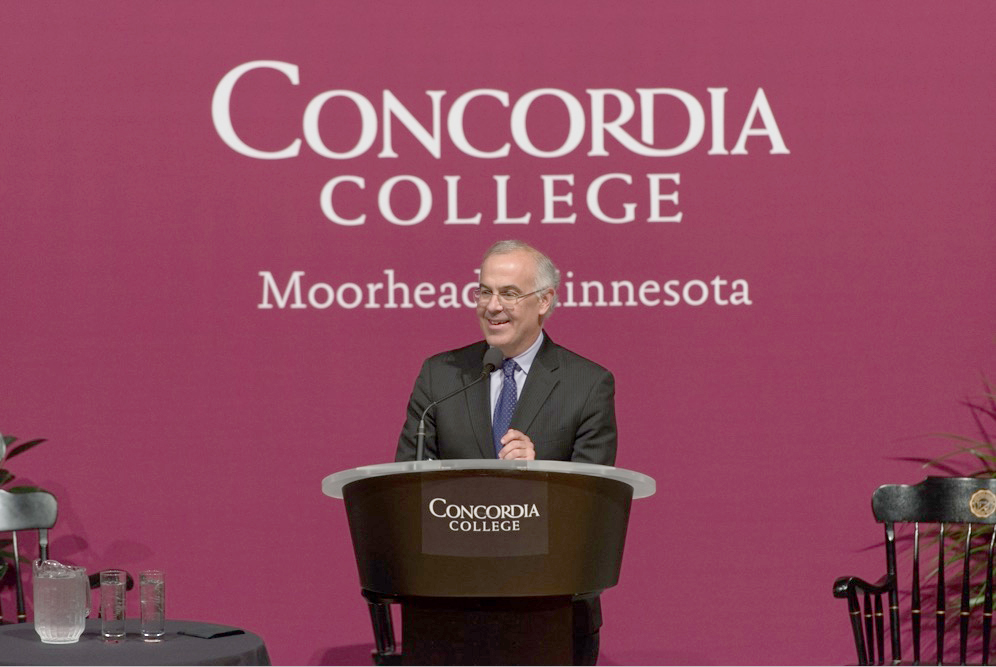 On Thursday, Feb. 9, Concordia played host to New York Times columnist, author, and political and cultural commentator David Brooks as one of the 125th Anniversary President’s Seminars. Speaking to a nearly packed Memorial Auditorium, Brooks’ lecture was titled “Faith, Leadership, and the Arts of Citizenship.”

Brooks was introduced by Dr. George Connell of the philosophy department, and started off his speech with a bit of humor, joking about “Minnesota nice,” and interactions with Senator Amy Klobuchar.

Discussing his recent book, “The Road to Character,” Brooks dove into his own experiences with discovering character and how politics and faith can affect it.

“I don’t hold myself up as a paradigm, I’m someone with a naturally shallow nature,” Brooks said before delving into an anecdote about his fiscal conservatism being apparent from an early age.

Moving on to his college years, Brooks kept up the humor, joking about his experience learning philosophy at the University of Chicago which he says, “Is a Baptist school with where they have atheist professors teach Jewish students St. Thomas Aquinas.”

Brooks was then able to take these seemingly insignificant details and link them to his adult life and finding moments of peace and clarity. One such moment of peace that was used as a cornerstone for his message was detailed in a story about nights spent with a family friend who takes in neighborhood children who need a temporary place to stay.

“On Thursdays they have dinner and the whole group, maybe 25 kids and some adults go around the table and tell you something about themselves you don’t know, and they affirm each other,” Brooks said. “What we adults give to them is we serve as their audience, as a chance to share their gifts with us; read some poetry, show a painting they had done. And what they give to us is a complete intolerance of social distance. As I said when I meet someone I shake their hand, and when I first started going to this place on Thursday nights about two or three years ago I went to shake someone’s hand and he said, ‘We hug here.’ Since then it has been all hugging and physically intimacy and emotional intimacy, and supporting people in the most direct way.”

This intolerance for social distance was Brooks’ main theme for the rest of his lecture, and how by bridging the gap between political parties and religious affiliations we will be able to come together as a society.