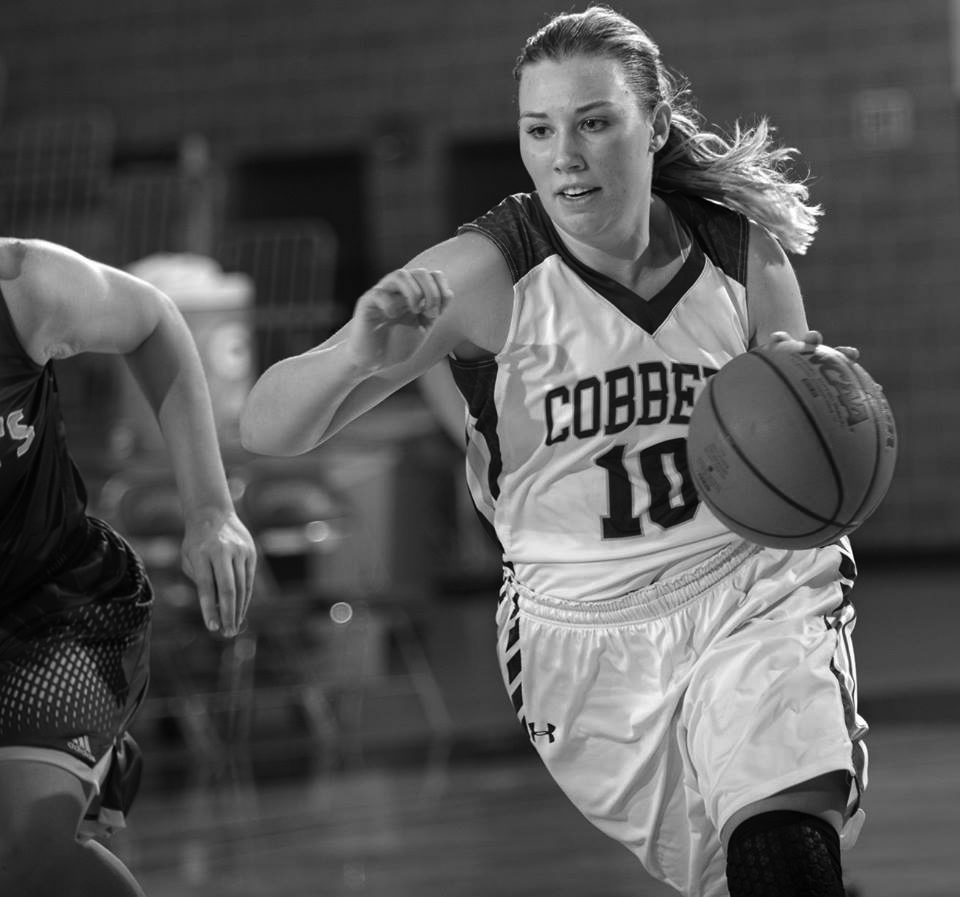 Change is difficult to overcome, especially in sports. But for some athletes, like women’s basketball sophomore Lincoln Haiby, change is all that they are used to.

Avid Cobber supporters may have noticed that for a majority of last year, Haiby was playing as a small forward. This year, she has been switching positions all season, from small forward to a shooting guard – two completely different positions.

While some may find it annoying to constantly switch, Haiby is used to it.

“High school I kind of got thrown around too,” Haiby said. “Our point guard tore her ACL my junior year. . . so then I got thrown to anywhere from one position to a four position, occasionally a five.”

After that junior season in high school, Haiby realized that she may no longer be just a small forward.

History, in a way, may have repeated itself when Haiby got to college. While she was improving inside as a post her freshman year, her sophomore year had something else in store. Assistant women’s basketball coach Christina Jost said unforeseen circumstances caused Haiby to be moved again to the shooting guard position.

“Personal things and injuries came about and we knew that she could handle it [shooting guard position],” Jost said. “She has a skill to do both.”

For Haiby, she prefers being down in the paint with the posts, or in the lane.

“I preferably like to be a post and bang on the inside,” Haiby said. “I wanted to be a post coming to college, but knew I wouldn’t because I’m too small.”

The fact that she is so used to playing both positions has really helped her show just the kind of athlete she is.

“I’m able to guard the posts and I’m used to playing post and I’d like to say I have decent basketball IQ so being able to run the plays, but also to make reads on the perimeter and what not,” Haiby said.

Just like Haiby, Jost knows the versatile player that Haiby can be.

“She is extremely coachable,” Jost said. “She will sit down and take any feedback that you’ll offer her. Then will go ahead and implement it into her game or at least tries too.” Haiby prefers the post, but her teammate, sophomore Jamie Mentzer, sees her excelling as a fellow guard.

“I like playing with her at a three,” Mentzer said. “I feel like she is more confident and plays to her potentials and her strengths out on the perimeter.”

According to Mentzer, Haiby’s basketball IQ really proves in her favor as a player.

“She knows when to make reads and when to set up a play,” Mentzer said. “She is very good at off the ball [playing when she doesn’t have the ball in her hands], so she knows when to cut, move and screen.”

While knowing the game is helpful, it is Haiby’s work ethic that allows her to thrive.

“She puts the extra effort in outside of practice,” Mentzer said. “Whether it’s being one of the first ones there to shoot and one of the last ones to leave, she spends the time watching game film and bettering herself. She goes 110 percent in drills and practice and never slacks off.”

All of these ingredients that Haiby possesses has paid off and showed that in fact, she can play both positions. For the first part of the season, Haiby was ranked third in the MIAC for three point shooting percentage.

“I was shocked, because . . .I wasn’t that great of an outside shooter,” Haiby said. “The first few games I hardly took any shots . . . but then they started falling so then I shot more and more of them. I guess it was pretty cool, like I wouldn’t have expected that.”

Right beside Haiby was Mentzer, encouraging her even when Haiby could not get her shots to fall.

It doesn’t matter what position Haiby is in, she just wants to be out there.

“I love playing basketball and I’m just trying to get better,” Haiby said. Haiby and the rest of the team will play their last game of the season this Saturday, Feb. 18th against first ranked team in the MIAC St. Thomas at home in Memorial Auditorium.