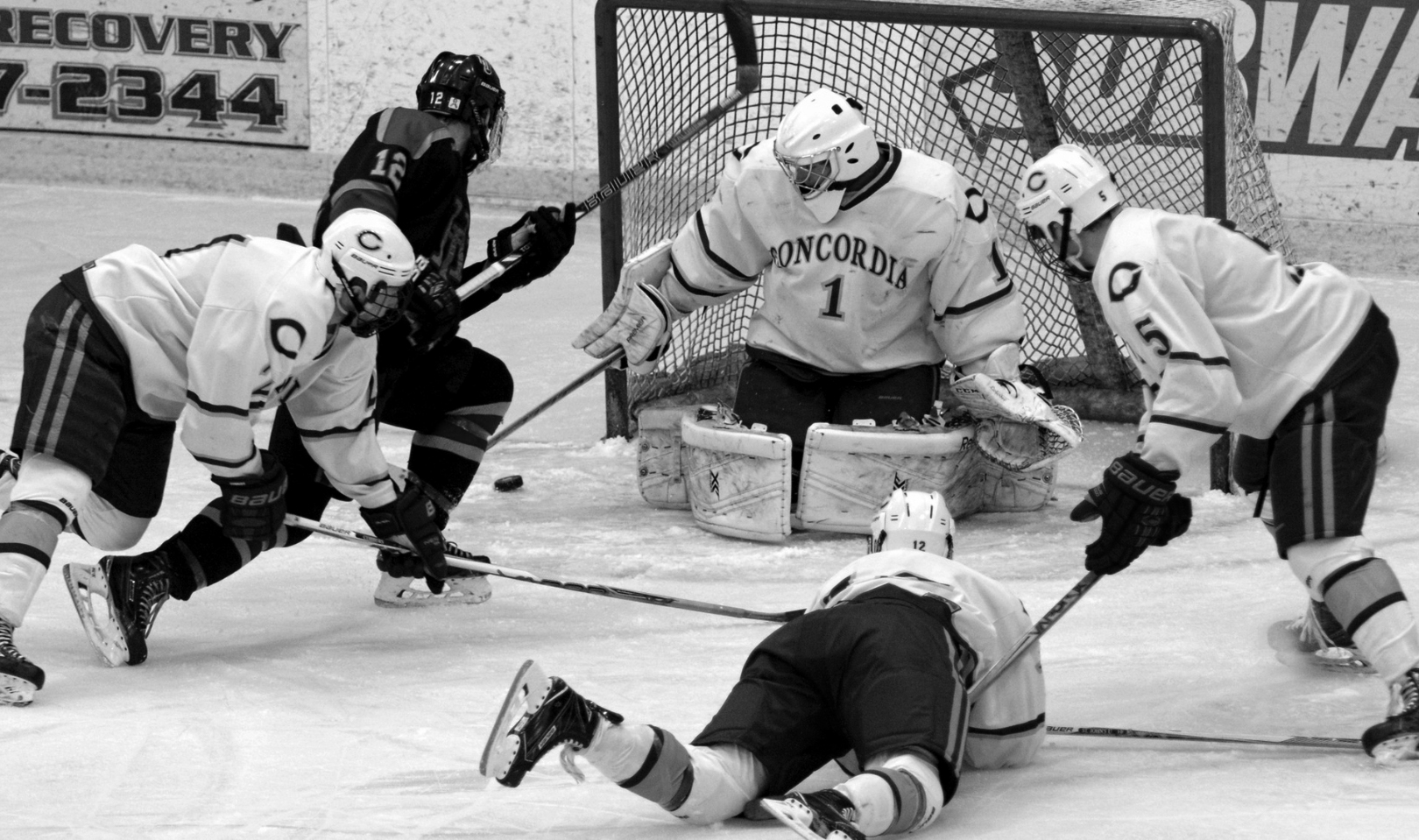 Playoff preparations are in full swing for both Concordia hockey teams as they get set to take part in the MIAC tournament this weekend. Both the men’s and women’s teams will travel to the cities this weekend to compete for Concordia’s first NCAA tournament appearance in five years.

The women’s hockey team found itself in a tough spot going into the final game of its regular season. After clinching their playoff seed based on other conference results Friday night, Feb. 17 — despite a 5-2 loss at the hands of a young Bethel team with no playoff hopes — the Cobbers knew they had to play well to build positive momentum as they moved into the playoffs.

“You want to go into the playoffs feeling good about your game as an individual and as a whole, and I think we were able to accomplish that,” Head Coach Jason Gregoire said.

After giving up a Bethel goal to tie the game at one just moments after scoring early in the first period, the Cobbers rattled off four more first-period goals to take command of the game. It was a complete offensive performance for Concordia in the 7-3 win. For a team used to outstanding defensive performances, a game with seven goals from six different players was refreshing.

Concordia is the No. 3 seed in the MIAC playoffs and will go on the road next weekend for the conference semifinals. The Cobbers finish the season with a record of 14-8-3 overall and 11-5-2 in the MIAC. Getting the top three seeding was important as it ensured a spot in the semifinals and limited the number of games necessary to win the title. The No. 4 and No. 5 seeds in the conference have to play a play-in game tonight to advance to the semifinals.

“With the makeup of this year’s team, it’s huge for us to not have to play the play-in game,” Gregoire said. “We need to play an aggressive, up tempo style of game which can be very taxing on the body. Not having to play the extra game, the ladies can leave it all out on the ice for us.”

The focus for the team now shifts to a showdown next weekend with MIAC No. 2 seed Augsburg in Minneapolis.

The Auggies finished with a record of 18-7-0 (14-4-0 MIAC) and have one of the best defenses in the MIAC. Goaltender Rebecca Sonnek is the holder of a tremendous .945 save percentage and an equally impressive 1.25 goals against average. The Auggies have given up only 34 goals all season.

Concordia split the season series with Augsburg 1-1 and put seven goals past Sonnek over the course of a weekend series in Moorhead. The Cobbers came away with the Friday night win Jan. 20 with two goals from junior Tori Davis, but the next afternoon Concordia was not able to claw its way back into the game from a four-goal third-period hole. The Cobbers were able to get two late tallies to bring the final deficit back to two, but it was too little too late for the home team in a 5-3 loss.

If Concordia can win two games in the conference tournament, the women will earn the MIAC’s automatic bid into the NCAA tournament. Concordia last appeared in the NCAA tournament in 2012. The Cobbers lost their opening round game 5-2 against eventual national champion RIT. Gregoire stressed the need for fundamentals ahead of a game against strong, even competition in Augsburg.

“We need to focus on being clean in our end, limit blue line turnovers and we need to get pucks and bodies to their net to make it as hard on their goalie as possible,” Gregoire said. “We also need to relax. We play much better when the ladies aren’t worried about every mistake. Just go out, make your shifts count and have a bunch of fun doing it.”

For the men’s hockey team, the playoff run will be much tougher as Concordia faces a play-in game today, Feb. 23, at Hamline. The winner of that matchup will advance to a semifinal showdown with MIAC regular season champion St. Thomas.

The men slipped into the playoffs after losing their final game of the regular season to Bethel 4-3. Concordia had a 3-1 lead going into the final period, but three third-period goals for the Royals sunk the Cobbers. Regardless, Head Coach Chris Howe is proud of the men’s game.

“We’re very happy with the way we played,” Howe said. “We played well five out of six periods last weekend, and that game didn’t really mean anything.”

Like the women’s game earlier that same day, the game was meaningless for playoff seeding. With the No. 5 seed in the conference tournament, the men’s hockey team will have to win three games to win the conference title. Concordia has not won the MIAC men’s title since 1986-87.

“I think if anything, the play-in game gives us a little structure. We’ll go down Wednesday night, practice in the morning, and come back up afterwards for a day of class,” Howe said. “If we win, we’ll do it again Saturday.”

Hamline is a strong team that matches up well with the Cobbers. The Pipers are 1-0-1 against Concordia this season. The teams met in a series Jan. 13-14 in Moorhead. Concordia won the first game in the shootout, but officially the game went down in the scorebook as a tie because of MIAC rules. The Pipers won the second matchup 4-2 with the help of a late empty-net goal.

The matchup between the schools is a rematch of last season’s play-in game between Hamline and Concordia. Last year, the Pipers came away with the road victory at the Moorhead Sports Center after controlling the Cobbers in a 3-0 win.

“It’s nice to get another chance, but the team we play doesn’t matter that much. We know if we go down there and play our game, we’ll get with the win,” Howe said.

If the men’s team wins tonight in Minneapolis, it will have to turn around and prepare for a matchup with St. Thomas on Saturday.

The men’s team has qualified for the playoffs each of the past five seasons and six of the nine years coach Howe has been behind the bench. The playoff streak is especially impressive considering the team won only five conference games in Howe’s first two seasons with the school.

“I’m very proud with where the program is at. We’ve made the playoffs six of the last seven years, and we would’ve made it seven straight if we hadn’t lost the last day of the season a couple of years ago,” Howe said. “It’s all thanks to the quality of players we have here that we’ve been able to accomplish what we have.”

Both coaches stressed the need for simple, technically sound play. Coach Howe summed up his team’s attitude ahead of tonight’s play-in game.

“At the end of the day, the team that plays better is going to win the game.”