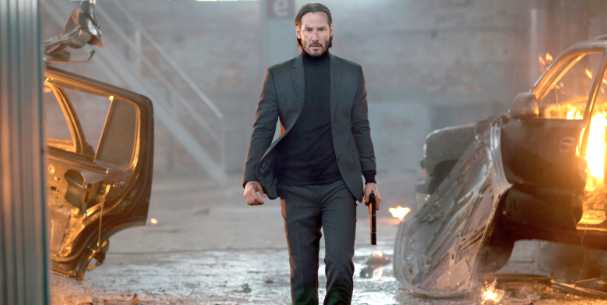 After the Boogeyman, John Wick, the man who killed three men in a bar with a pencil, seems to have finally escaped the hitman industry, he must gear up for another comic bloodbath across New York, and this time, Paris too. In the first film, he wasted around 100 goons across New York in a quest for vengeance. “John Wick: Chapter 2” builds upon the mercenary industry created in “John Wick” and proves to be a compelling sequel in a time when many, like “Rings” discussed last week, tend to disappoint.

This film combines action with much more action. “John Wick: Chapter 2” is the second film in a trilogy about John Wick, one of the world’s greatest hitman, if not the best. Very early in the first movie, “John Wick”, John Wick’s love interest passes away. She was the reason that John left the hitman industry, and after some time, he enters the business of killing again. At the beginning of “John Wick: Chapter 2” the adventure continues, this time around the world in a story of repaying debts and killing hundreds more people in a quest for vengeance once again. John travels to Rome and works with The Continental, the secret assassin society stationed around the world. John Wick encounters Santino D’Antonio and their conflict rises in their respective quests to end the other’s life. With John Wick having a third installment, what happens at the end of this one has significant influence on the third installment.

One issue for many when watching a trilogy or series of movies is that a viewer typically needs to have seen earlier films to understand the newest film. While there are some intricacies that are more appreciated after having seen “John Wick”, there are not many moments that require previous knowledge to understand the universe. The movie opens with a scene that starts shortly after the first film, and is a continuation of the first film, as there are many related characters and plot devices between the two movies. Ultimately, John Wick is drawn out of retirement very quickly, again. The hitman, at one point out of the game of murder, has been pulled back in for the same reason he initially got out.

In this movie, one key positive feature is how the universe develops. After being introduced to the “Continental Hotel” and many mercenaries around the world, John Wick is brought out of retirement by Santino D’Antonio (Riccardo Scamarcio) for a personal wish. John Wick’s story in this movie is to repay a personal debt to D’Antonio, which is how Wick first got out of the industry. D’Antonio brings him back, and then betrays him, putting a bounty on his head for $7 million. However, DAntonio seems to have forgotten that he betrayed John Wick, the man who killed three men in a bar with a pencil. Many assassins try to claim the bounty on Wick’s head, and by seeing more assassin’s than just Wick, including actors and actresses like Ruby Rose, Common, and Laurence Fishburne (who worked with Reeves in the “Matrix” Trilogy): the network, currency, and universe behind Wick’s motives and actions are understood on a greater level.

Another key feature to the movie lies in the action sequences spread throughout. Every ten minutes, there is another firefight and John Wick mows down countless goons across the globe. Each sequence builds upon the previous, and while it may seem unreasonable for someone to get shot and stabbed as much as John Wick does, there are some realistic features to the film as well.

Chad Stahelski, director of “John Wick: Chapter 2,” is one of the few directors who still has reloading be an important aspect to movies, and even crucial at times. There is a certain realism brought to Wick running out of bullets or being limited in some way that he needs to pull off some ridiculous stunts, including fights on stairs, car chases and seamless fights between John Wick and many other assassins. These stunts occur frequently, are filmed well, and in long takes. The smooth glide of the camera scene after scene creates a more realistic environment for the movie to take place in.

Throughout the movie, there is humor mixed into the action sequences, and it provides appropriate relief throughout the movie. The pacing is on point, and the action sequences build in intensity alongside the overall plot. The film does not overdo the action sequences with unruly explosions like “Die Hard 2” or abandon its previously successful efforts, but finds a medium by building its previous success and adding a new variety of acts. Realism is always discussed in action sequences, and in “John Wick: Chapter 2,” action sequences are an important aspect met to add to the realism. John Wick has certain “moves” that are repeated, like flipping a bad guy over his shoulder. By repeating some of these moves in combat, it is more real in that a single person only has a limited bag-of-tricks to use. This added to the experience watching the film.

Ultimately, “John Wick: Chapter 2” builds upon “John Wick,” which is not something Keanu Reeves’ effort in the “Matrix” Series did. Between the growth in the lore of the John Wick universe, the increased number and quality of action scenes, and improvement upon every aspect provided in the first film, “John Wick: Chapter 2,” earns a solid 8.4/10. This is a movie that audience members love, which is exemplified by ratings on IMDB and Rotten Tomatoes. Check out detailed thoughts from Sean and Jon by checking out SZ Entertainment for weekly content about movies and other shenanigans.

No story has only two chapters, so seeing what John Wick has in store in the final chapter will be exciting for fans of the franchise and action fanatics alike.

2017-02-23
Previous Post: The search is on for a new librarian at Carl B. Library
Next Post: Cobbers can, and should, voice concerns to SGA