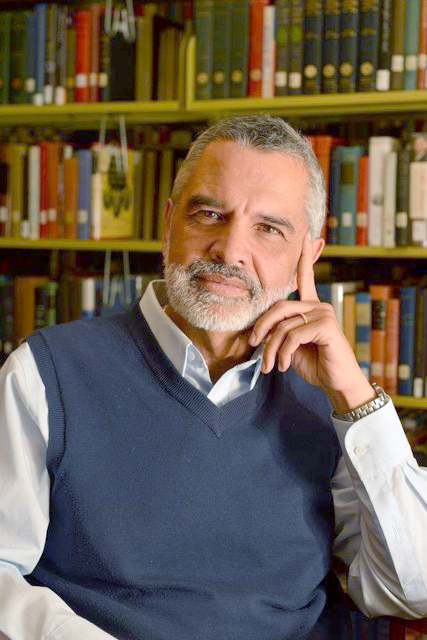 A memorial service will be held Monday, March 23, at 7 p.m. at First Lutheran Church, 619 Broadway in Fargo.

Gargurevich, originally from Peru, started working at Concordia in 1994 – 23 years ago–after teaching at Auburn University in Alabama. Not only did Gargurevich inspire countless of students to delve into the Spanish language and culture through his courses, he motivated students to immerse themselves into the tangible culture and language by studying abroad. He co-created the May Seminar to Latin America. He led the program with other Spanish faculty members several times. For a few years, Gargurevich served as Dean of the Concordia Language Villages summer program to Argentina. He taught summer school in Peru and Spain. Gargurevich was the faculty advisor for the Spanish Studies Abroad programs in Argentina, Sevilla and Alicante. Gargurevich served as Spanish department chair twice.

Students and colleagues say Gargurevich’s passion and energy for teaching incited students to further their language students and become responsibly engaged with the world. For Ashley Thompson ‘16, Gargurevich’s zestful personality enticed her to consider studying Spanish.

“Eduardo was my first contact with the Spanish department at Concordia and he got me talking about being a major and studying abroad when I was too afraid to even think about that,” Thompson said on a Facebook post. “I never had him as a professor, but he subbed for my classes a few times and he always challenged me to be better with a big smile on his face. He never stopped giving me the casual hola in the hall either. I remember going to CLV and seeing him there having the time of his life as usual. He just had a wonderful personality. He was wonderfully himself and he gave the department so much spirit and character. It was always cool to see his eyes light up when he talked about Spanish culture. Talk about a man who loved his job. Even from someone who didn’t take his classes, his presence will be so greatly missed on campus. Such an amazing man. My love goes out to his family (who he talked about with so much love in his heart) and all who knew him.”

Olivia Crouse ‘16 had Gargurevich as her advisor and as a professor. Some of her best memories at Concordia are of Gargurevich.

“He always encouraged me to challenge myself and helped to develop my interest in Spanish,” Crouse said on a Facebook post. “I will never forget his passion and his sense of humor, or that one time he accidentally took a selfie with the sound all the way up on his phone during one of my Spanish exams. Eduardo is without a doubt the biggest reason why I continued to pursue my Spanish degree at Concordia and I will forever be thankful for that.”

While Soledad Kern ‘06 was at Concordia, she participated on a Latin American May Seminar, where she experienced his fun personality. “He made us laugh so many times during our class and during the May Seminar to Peru, Argentina, and Puerto Rico,” Kern said on a Facebook post. “He genuinely cared about everyone around him and will be greatly missed. Siempre será mi mentor, profe, y amigo. Que en paz descanse.”

Mo Sawatzke ‘16 is thankful for having the opportunity to learn from an intelligent, enthusiastic professor.

“Eduardo was one of my favorite teachers,” Sawatzke said on a Facebook post. “He always made me laugh and had such a passion for spreading his love for Spanish and Portuguese. If I didn’t miss him enough since graduation, I will surely miss him now.”

Gargurevich was more than a professor or a colleague, he was a close friend for many. Spanish Assistant Professor Fanny Roncal Ramirez found Gargurevich to be her family in Moorhead.

“He was an uncle to my kids. Gabriel [Roncal Ramirez’s son] will miss his visits to our house, especially the candy and chocolates he used to bring for him! Valeria will miss his young attitude because she used to tell me that ‘Eduardo is fun;’ and according to her, I am not [fun], even though I try my hardest,” Roncal Ramirez said in an email. “As I always told Eduardo, he was a good person, and as a colleague, a very helpful one. It felt good to be around him. Now that he is gone, it will take me sometime to understand that I will not see him in his office to talk anymore, I will have no one to bring me something from Peru, I will not have him to help me take students abroad, I will not have my friend anymore…He left too soon, but I know that he also left great memories for all of us to remember him as the great man he was.”

Ady Johnson, Spanish assistant professor, says that the Spanish department will not be the same without him.

“These couple of days have been very hard for the Department and for me personally. I met Eduardo 18 years ago. He was the most kind, positive and generous person you can encounter,” Johnson said in an email. “Besides being my colleague, he was my good friend. My husband and I would socialize with him outside work and he was a big part of our lives. He was passionate about learning and teaching and a talented author having published several books of novels and poetry. He was an intellectual and at the same time, a simple, happy, giving person. Loved to be surrounded by friends and family and had a deep love for his country, Peru where he would travel to at any opportunity he had and where all his family resides. The Spanish department will miss him tremendously and our lives will not be the same without him.”

Chair of World Languages and Cultures Mary Rice has worked with Gargurevich since he began at Concordia. Throughout the years, they created a friendship that everyone strives for.

“He was more than a colleague, he was a dear friend, almost like a brother,” Rice said in an email. “We went through a lot of changes in the department and our personal lives together and he was always there for me (and everyone else) with a smile, a listening ear, or a shoulder to cry on, whatever I needed. My heart is broken, but it is also warmed by the outpouring of love and support from the campus community and students past and present and the stories people have shared about how Eduardo touched them.”

“I think something special about Eduardo is that he led this amazing life,” Twomey said. “He was an intellectual that had traveled all over the world, studied in different countries, knew all kinds of scholars and academics, wrote and published poetry and novels… and he was at the same time the guy you could joke around with and talk with about your kids or politics or a soccer match or why the copy machine wasn’t working right. He put on no airs. He was friendly to everyone. He was often the first person you’d see when walking into the office because his door was right next to the Spanish office entrance. He’d say a friendly “Hola! Hola!” and go back to work. He taught all kinds of courses and knew his stuff. He helped make our department a happy place. It is hard to imagine the place without him.”

Other Spanish faculty express how much they will miss Gargurevich’s humor, intellect, friendliness and his sweet-tooth.

“The beautiful joy he had for life,” said Assistant Instructor of Spanish and Hispanic Studies Karin Hillstrom in an email. “His great sense of humor. Always caring for others. A class act.”

“For his students he was inspiring, patient, welcoming,” said Elizabeth Arroyo, instructor of Spanish and hispanic studies in an email. “For his colleagues and friends, a smiling face that made our mornings brighter.”

“He loved chocolate. First thing in the morning he would come and look in work room to see if someone have brought treats,” Johnson added. “Lots of time he would bring treats. He loved to cook and share recipes.”

“You never know how much you love them until they are gone,” said Francisco Cabello-Cobo, Spanish professor in an email. “I always admired his innate talent to strike a conversation with anyone, anywhere. He was a natural. A lover of people, all people.”