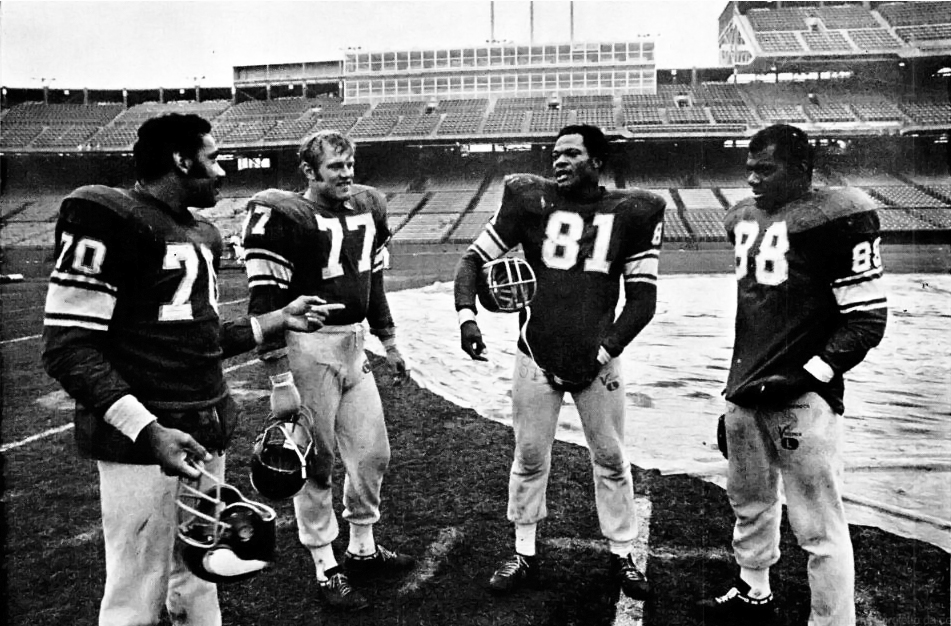 Seven players from Concordia have made regular season rosters in the NFL, but only one made multiple pro bowls in his career — Gary Larsen. Larsen’s two pro bowl selections in 1969 and 1970 and three super bowl appearances give him the distinction as having the most accomplished professional football career in the history of Concordia College.

Larsen, a Moorhead native, enrolled at Concordia in 1957 but left school to join the United States Marines after struggling with his grades. After spending three years in the Marines, Larsen returned to Concordia, carrying a lot more responsibility than he left with. During his three years with the Marines, Larsen got married and had a daughter who was three months old when he returned to school.

Serving with the Marines, during which he played two years of service football, was pivotal for Larsen as a person and as an athlete.

“The idea of going back to school really hit home after I spent three years there because I saw how the other half lived and I didn’t really care for that,” Larsen said. “I think it helped me into my pro career. I grew up and put on some weight.”

According to his former teammate Jim Herk, who played linebacker, Larsen wasted no time showing his abilities.

“He was a dominating guy. Opposing teams avoided running his direction,” Herk said. “He was a great defensive end.”

According to the archives, teams averaged just 2.9 yards per carry against the Cobbers in Larsen’s final season, which helped the team to a record of 7-2. There is no doubt that Larsen’s abilities played a big part in limiting the rushing attacks of opposing teams but for Herk, Larsen’s infectious toughness was equally important to the team’s success.

One moment in particular sticks out to Herk as exemplifying the kind of toughness that Larsen expected from his teammates.

“I came out of a pileup and looked at my hand and my middle finger was sitting at 90 degree angle,” Herk said. He approached Larsen and told him he needed to leave the field to get it fixed. “He said here, and he grabbed a hold of my hand with one hand and my finger with the other and put it back in joint.”

Fifty-three years have passed since Gary Larsen was enrolled at Concordia but the College still holds a special place in his heart.

“I was happy with my career at Concordia,” Larsen said. “I enjoyed my coaches, I enjoyed my teammates and that’s 100 percent of the deal.”

Larsen was drafted in the 10th round of the 1964 NFL by the Los Angeles. He played one season in Los Angeles before fulfilling a half hearted proclamation he made years earlier while in the marines.

“When I was in the service is when the Minnesota Vikings came into the league as an expansion team,” Larsen said. “Everybody on my team knew I was from Minnesota and I kind of kidded saying it sure would be nice to play for those guys. At the time, I had no idea.”

In 1965, Larsen was traded to Minnesota where he would play for the next nine seasons. During his time with the Vikings, Larsen was part of a defensive line that was nicknamed “The Purple People Eaters” and is still regarded as one of the best front fours in the history of the NFL.

The three lineman that Larsen played alongside of, Alan Page, Carl Eller, and Jim Marshall, have all been inducted into the Viking’s ring of honor. To Marshall, Larsen was instrumental in their success.

“He had our backs all the time and that gave us the freedom to go wherever the ball was,” Marshall said. “He was a very intricate part of a machine that worked quite well.” Like Herk, Marshall remembers Larsen’s intangibles the most.

“The thing I remember most about Gary was the quality of his personality,” Marshall said. “He had a personality that was him, there was nothing false, phony, or putting himself above his teammates or team. There wasn’t any of that. He was just as genuine as anybody I’ve ever met in my life.”

Although Larsen is long retired now and lives in Washington, both Larsen and Marshall said that the group remains close to this day.

Just this last season, the Vikings invited them onto the field and honored them as part of the coin toss and the opening of US Bank Stadium.