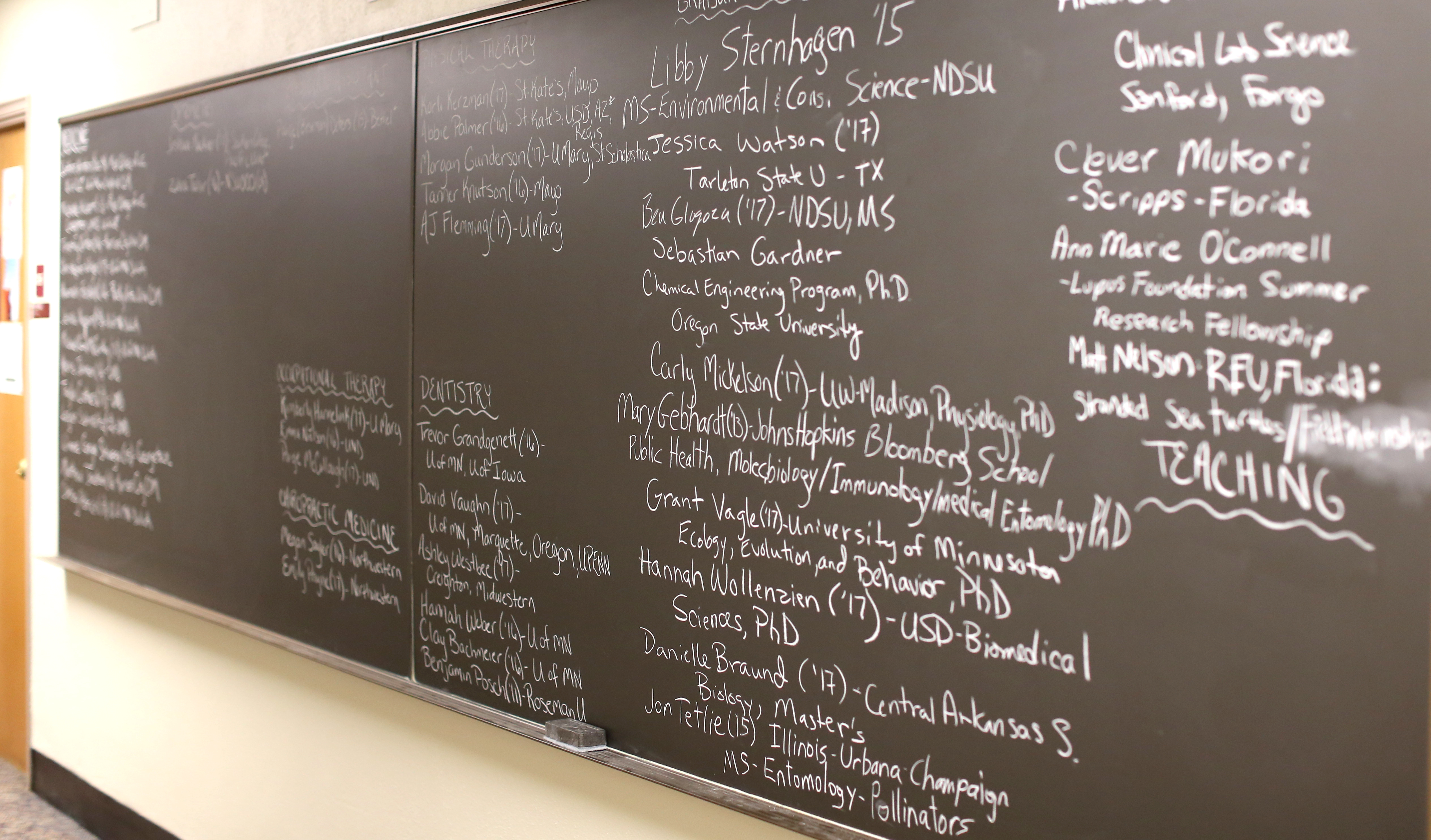 This past summer, students studying health profession around the United States began to submit the primary applications for graduate programs to the American Medical College Application Services; the results of which are now beginning to trickle in.

“There are a lot of steps to the process,” said Dr. Julie Rutherford, associate professor of biology and the director of health professions at Concordia. “[The student] goes into AMCAS and opens up an application. It asks for all kinds of information: they have to put in all the grades for every class they ever took, put in all their activities – all the stuff that they’ve done. It involves a pretty extensive personal statement, saying why they want to be a doctor, what is driving them to this profession.”

AMCAS opens in May every year, with students typically applying for graduate programs in June. The student’s Medical College Admission Test score, along with the student’s transcript and letters of recommendation, are also sent to AMCAS. AMCAS then takes that information and transmits it to the medical schools that the student is applying for.

“It was very strenuous. I started it last June,” said senior Chelsey Petrich, biology major. She said that after you send in your primary AMCAS application, the secondary applications to specific schools need to be submitted. Once those are completed, students begin to receive interviews.

“So from June until September I was doing my applications, and then I heard back for some interviews in November and December,” Petrich said. “I begin [at the University of Minnesota-Duluth] this August.”

According to Dr. Rutherford, the college wrote 59 letters of recommendation for students applying to health professions this past year. However, that number isn’t just limited to 2017’s graduating seniors.

“About half of students graduating this year are actually applying this year. [The other] half are choosing to take a gap year before they apply,” Rutherford said. “That’s becoming a significant trend that is happening nation-wide: students are choosing to wait and take time to do whatever their application is lacking, and then apply a year or two later. So when I say we wrote 59 letters, that includes people who graduated one year, three years, or even five years ago.”

Chris Wiger, a senior majoring in biology and Spanish with a minor in chemistry, was one student who decided not to wait.

“I’m kind of in the mode of school – of studying and learning. I thought, ‘Well, I enjoy it, so why not? I might as well keep going,’” Wiger said. “I understand why people take gap years. But, it is a long haul, the ‘becoming a doctor’ process.” Wiger has been accepted into the University of Minnesota-Duluth.

Petrich explained that one factor in her decision to apply when she did was the supportive staff within the biology department.

“I went and talked to Dr. Rutherford, just to get a feel whether or not she thought that my application would be strong enough,” Petrich said. “She felt there were a couple of areas where I was lacking, and I worked to fix those. Then, I decided to apply. Her confidence in me, as well as my desire to keep going without stopping school, was what made me decide to apply right away.”

A tangible symbol of the biology department’s dedication to its students is a black chalkboard, currently located on the second floor of Fjelstad: the Med School Board.

“[The Med School Board] isn’t just a med school board. It’s where we celebrate the acceptances of students who are pursuing any health profession,” Rutherford said.

The board is empty at the beginning of the year, and come April, it’s filled with the names of students finding success, with dates of undergraduate graduations stretching as far back as 2012.

“The board is sort of a mix of health professions and bio majors who are going into graduate programs, internships, or teaching,” Rutherford said.

Rutherford explained that, even in the age of in Internet, tradition still pulls through.

“I post everything on Facebook; we have a health professions page,” Rutherford said. “It’s so much fun to see the students celebrating each other, and ‘liking’ the posts. Now we don’t need it because we’ve got [the Internet], but it’s tradition. We like the old style of sharing the news out in the hallway. It’s a fun way to show people that we care about our students, we celebrate our students, we’re excited for them when they achieve their goal.”

“It is a long path,” Wiger said. “But I came to the conclusion that medicine is what I want to do.”

Though at this time of the year it is difficult to nail down what exactly Concordia’s 2017 acceptance rate is, according to Rutherford.

“At this point in the year, the numbers are pretty on-par with previous years,” Rutherford said. “We usually end with about 18 to 22 students each year making it into medical school total.”

She also commented that she is expecting another five to seven other applicants’ approval letters to arrive before the end of May.

“The numbers are tricky,” Rutherford said, debunking common misconceptions about Concordia’s 88 percent acceptance rate into medical school. “When we talk about our 88 percent acceptance rate, that reflects a 10-year analysis of the data. Any student who applied to medical school within a 10-year span, who’s been accepted on any application cycle — it could be their first, second, even third — they’re ‘in.’ So, when we say ‘88 percent,’ it doesn’t mean, ‘On your first try, there’s an 88 percent chance that you’re going to get in.’”

However, she felt that it was important to note that for the remaining 12 percent, that statistic often doesn’t represent Concordia students who could never make it into the health professions; it more often means that those are students who discovered a different life passion after they graduated.

“They were doing something in a gap year and discovered [something new], and they don’t come back to apply again, after their first round. I don’t like that people sometimes say, ‘Well, there’s 12 percent that never got in.’ That’s 12 percent that found a different life that was right for them,” Rutherford said. “We don’t want to see the numbers misused — it can get twisted in a way that’s discouraging, but it can also get twisted in a way that’s inflated. Concordia’s had a strong health professions program for 40-some years. We’re not going to change that.”

Petrich felt that Concordia has equipped her well for her future at the University of Minnesota-Duluth.

“I just know that Concordia is a great choice if you want to be pre-med,” she said. “From everyone that I’ve talked to already who’s already in medical school, you’re overly prepared [with your education at Concordia].”

“As students think about applying, [the process] seems intimidating,” Wiger said. “It helps to take it one step at a time, to believe in yourself, and use the communities that you have to help you along the way. It is important to not let ‘the process’ take over one’s life. I’m really looking forward to focusing on medicine and the human body. I loved anatomy and physiology — focusing on that, and how it relates to medicine, and just learning how to be a doctor. I’m pumped for that.”