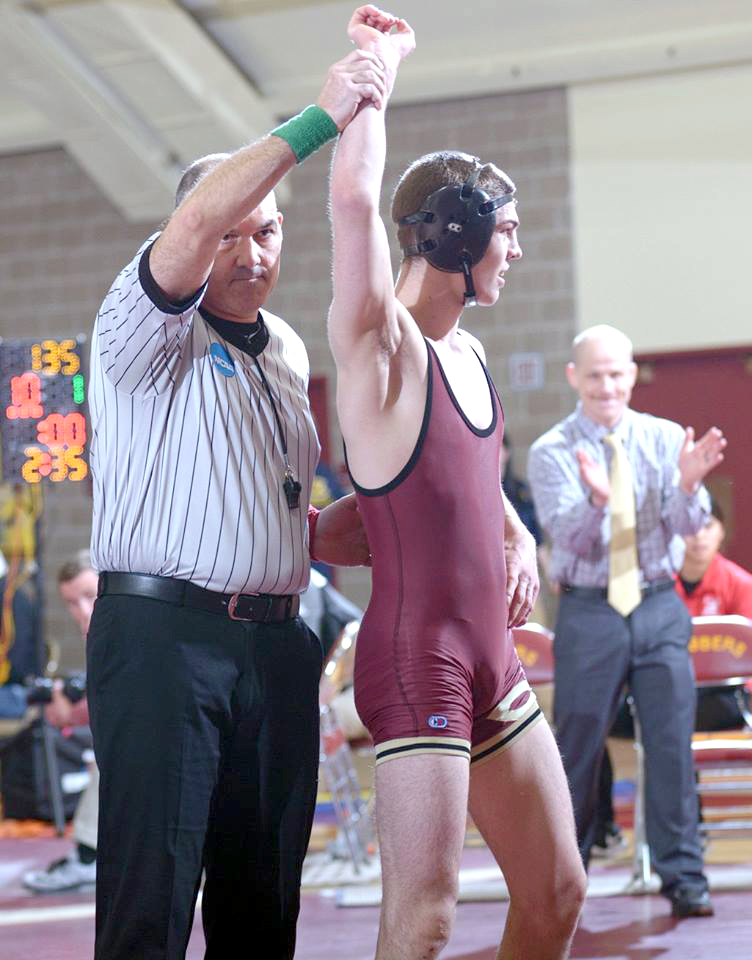 Every athletes goes into a season with a brand new slate. A fresh start with nowhere to go but up, for some, is the National Wrestling Meet and the possibility of becoming an All-American. Six Cobber wrestlers made it to the National Wrestling meet in La Crosse, Wisconsin – three returners and three NCAA Championship Meet rookies who took the big stage for the first time in their collegiate careers.

Junior Adam Presler and sophomore Ty Johnson were two of the wrestlers who competed at the meet for the first time. To get to the National Championship Meet, Presler and Johnson knew they needed to take into consideration their previous seasons performances and make some changes to their out-of-season preparation.

“I knew I wanted to make big improvements for this year’s campaign,” Presler said. “I lost a wrestle-off and actually was not even in the starting lineup for regionals last season, so I knew I needed to put in a good summer of training to prepare to make improvements.”

For Johnson, it was realizing how different collegiate athletics are compared to what he was used to.

“Going into my freshman season I really didn’t know what to expect,” Johnson said. “This year I kind of had a better understanding of you know, I can win more matches than I give myself credit for. … I feel like going into my freshman year I was kind of testing the waters and seeing what I could accomplish.”

For head coach Philip Moenkedick, this season had high expectations for all his wrestlers.

“The expectation was that they were going to train hard, commit to their goals and their team, and control the things that they could control to put themselves in the best position possible to accomplish their goals,” Moenkedick said.

Even with a new mindset and off-season preparation, the road to nationals wasn’t all that easy for Presler and Johnson.

“I didn’t start out the season maybe the way I wanted,” Johnson said. “I didn’t start for most of the year, but by the end of the year I was wrestling well enough that I was able to get that starting sport and I think the improvement that I made in the beginning to the end was huge.”

Presler had been in a similar drought.

“I would compete really well one weekend and then have a terrible outing the next week,” Presler said. “In our final duel against SMSU before the regional, I wrestled one of my worst matches of the year. That was a good turning point though and I prepared really well for regionals and nationals.”

Like with any athletic team, there were obstacles to overcome for Presler and Johnson. They overcame their obstacles and made it to their first appearance of the National Championship Meet.

While it may have been a relief to get there, they weren’t done yet. With the long journey up until that point in mind, the weeks leading up to the meet were crucial.

“I was just sticking with the training schedule the coaches gave us,” Johnson said. “Lifting twice a week still, which I think was a huge advantage for us. I know a lot of schools don’t lift that late into the season and they kind of stop lifting right around Christmas time. So I think having the strength aspect, that felt good.”

For Presler, it was the little things.

“I stayed especially focused on using our practices to sharpen up my technique and make sure I was doing the little things right,” Presler said. “I kept telling myself, ‘Nobody has worked harder than me and nobody has been as dedicated as I have.’ I just wanted to keep myself calm and confident as I prepared to wrestle some of the best opponents in the country.”

While Presler and Johnson were focusing on their individual preparations, the message before Nationals from Moenkedick was the same throughout the team.

“The message is the exact same for all my guys, regardless of the competition,” Moenkedick said. “That is to trust your training, be confident, and take advantage of the opportunity in front of you.”

In the end, there had to be someone who won and someone who lost, and there was no in-between. And for both newcomers, their performances fell short of the winning status.

Presler’s feelings mimic those of Johnson’s.

“I was disappointed in my performance. … It really stings to get so close to becoming an All-American only to fall short,” Presler said. “For the most part I thought I wrestled well, but I made a few critical mistakes and at times I let myself get a bit gun-shy instead of just competing relaxed and loose.”

According to Moenkedick, their nationals performance is not at all the best they are capable of.

“We had some good moments, but obviously the overall performance was not very good,” Moenkedick said. “As a whole, our performance was not indicative of the level that those individuals are at and where our program is at. We had a bad day at a bad time.”

While Presler may not have wrestled the way he wanted during the National Championship Meet, he was awarded for his academic achievements. Presler became the first Concordia student-athlete to win the top academic honor at an NCAA championship event — the Elite 90 award. This award recognizes an individual who captures the true meaning of being a student and athlete by reaching the highest of competition at the national level and having the highest cumulative grade-point average participating in the finals. Presler’s grade-point average at the time of competition was a perfect 4.0.

“Earning this award had actually been a goal of mine last year,” Presler said. “Even though I didn’t compete at nationals last season, I went to the event to cheer on my teammates, so I knew that last year’s Elite 90 winner had a GPA in the 3.9s. So, once I qualified for nationals, I had a pretty good idea that I was going to receive the award.”

While he may have had a hunch that he might win the Elite 90, Presler didn’t know that he was the only Concordia student to have done that.

“I was pretty surprised to learn that nobody from Concordia had receiver Elite 90 honors in the past because I have known so many Cobber athletes who excel in competition and in the classroom,” Presler said. “I feel so fortunate to compete for a school that stresses both athletic and academic excellence. Just within the wrestling team, we had five total Scholar All-Americans and the 10th highest team GPA in the country.”

While this is a huge achievement at the highest level of competition for a college athlete, Presler is hungry for more.

“Although I achieved some of my goals this season, my ultimate collegiate wrestling goal is to stand at the top of the podium at the National Meet as an NCAA Champion,” Presler said. “I think this season was a step in the right direction, but for me, it was still a failure. That said, I feel confident that I can make those final steps in my senior season.”