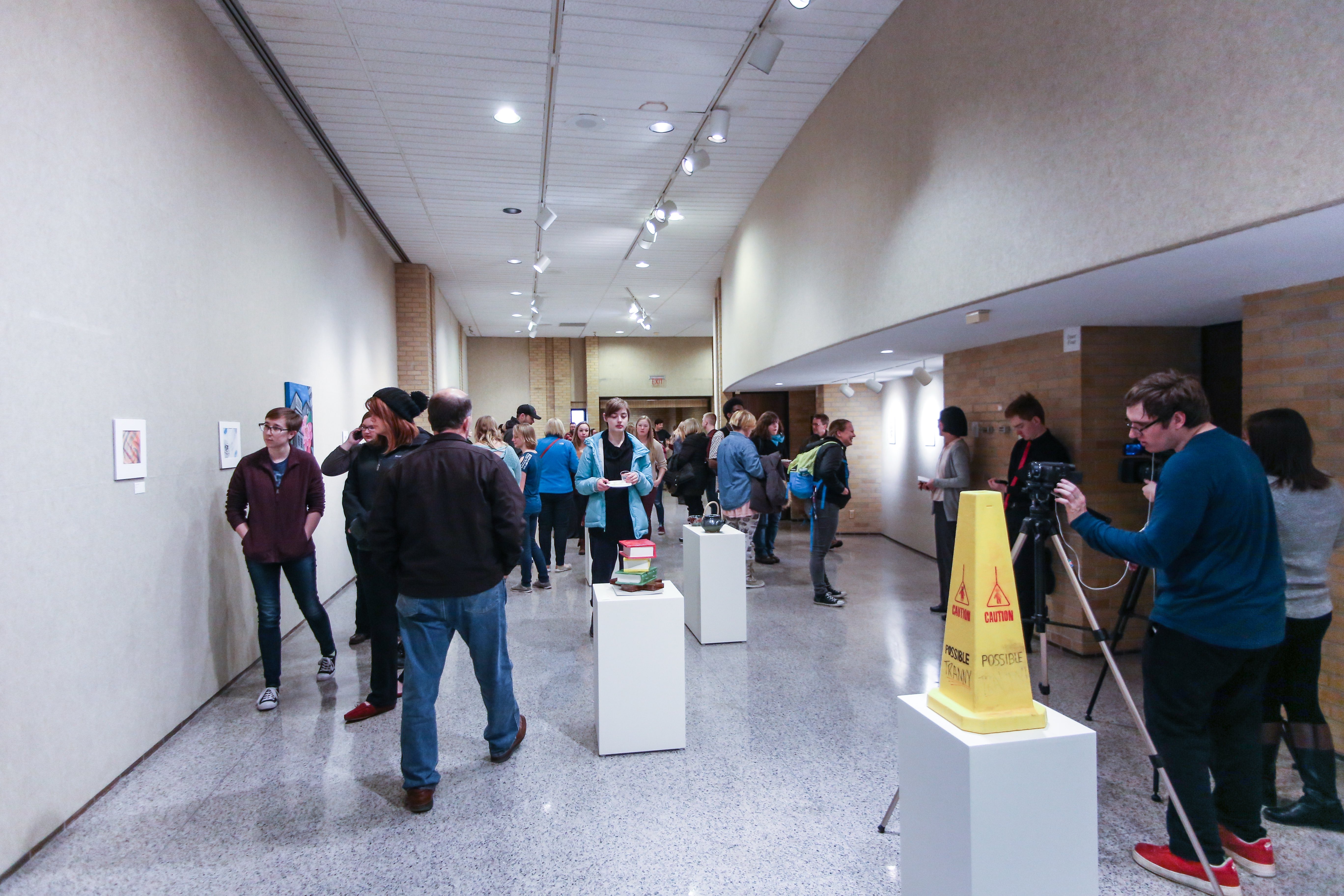 Last Thursday, students, faculty, and community members wandered around the Cyrus M. Running Gallery, admiring ceramics, digital photography, paintings, drawings and prints students have created. As the evening wore on, the students waited in anticipation to see who would win the various awards.

“I was pleasantly surprised to receive the Best in Show award,” Traynor said. “There were so many wonderful pieces entered this year; I guess I just wasn’t expecting it! The charcoal drawing is one of my favorite pieces that I’ve done, so I was very happy that is was recognized.”

“I will say that I was very surprised that I got the award and it is awesome when your hard work gets noticed,” Goerger-Stacy said.

Goerger-Stacy wasn’t the only one who won the Charles and Vicki Hartz Award for Excellence; sophomore Chelsea Steffes also won.

“I didn’t know I was going to win this,” Steffes said. “I’m pretty happy. I entered the self-portrait, it’s the blue piece at the end [of the gallery], it’s a sculpture. I didn’t win this award for that, I won this because I hang around the art department a lot.”

Every year, the art department invites a juror to select the work that goes into the show. This year, Tim Lamey, local photographer, was selected to be the juror for this year’s show. According to Jeff Knight, Cyrus M. Running gallery director, Lamey got to decide which art pieces made it into the show, as well as which pieces won the cash prizes.

“So, last year we selected Tim Lamey who came in a judged this year’s work and so he’ll or he’s already gone through the work and he judges what gets in the show, and then selects winners that will receive cash prizes for top awards,” Knight said.

Lamey was unable to be at the opening because he was out of town.

“You turn them all in after you’ve decided what you want to submit and then you wait,” Borah said. “It’s really a guessing and a hoping game at that point, cause you never know what that juror is going to choose.”

Students are invited to join the Student Juried Art Show, but it is not limited to just art majors.

“They’re invited to submit any work that they’ve done either in class or outside that has that they feel they want to submit,” Knight said. “It’s free to enter which we always encourage students to enter since it’s one of the few free shows they’ll have in their career. It usually costs a fee to enter stuff so we definitely encourage them to enter what they want.”