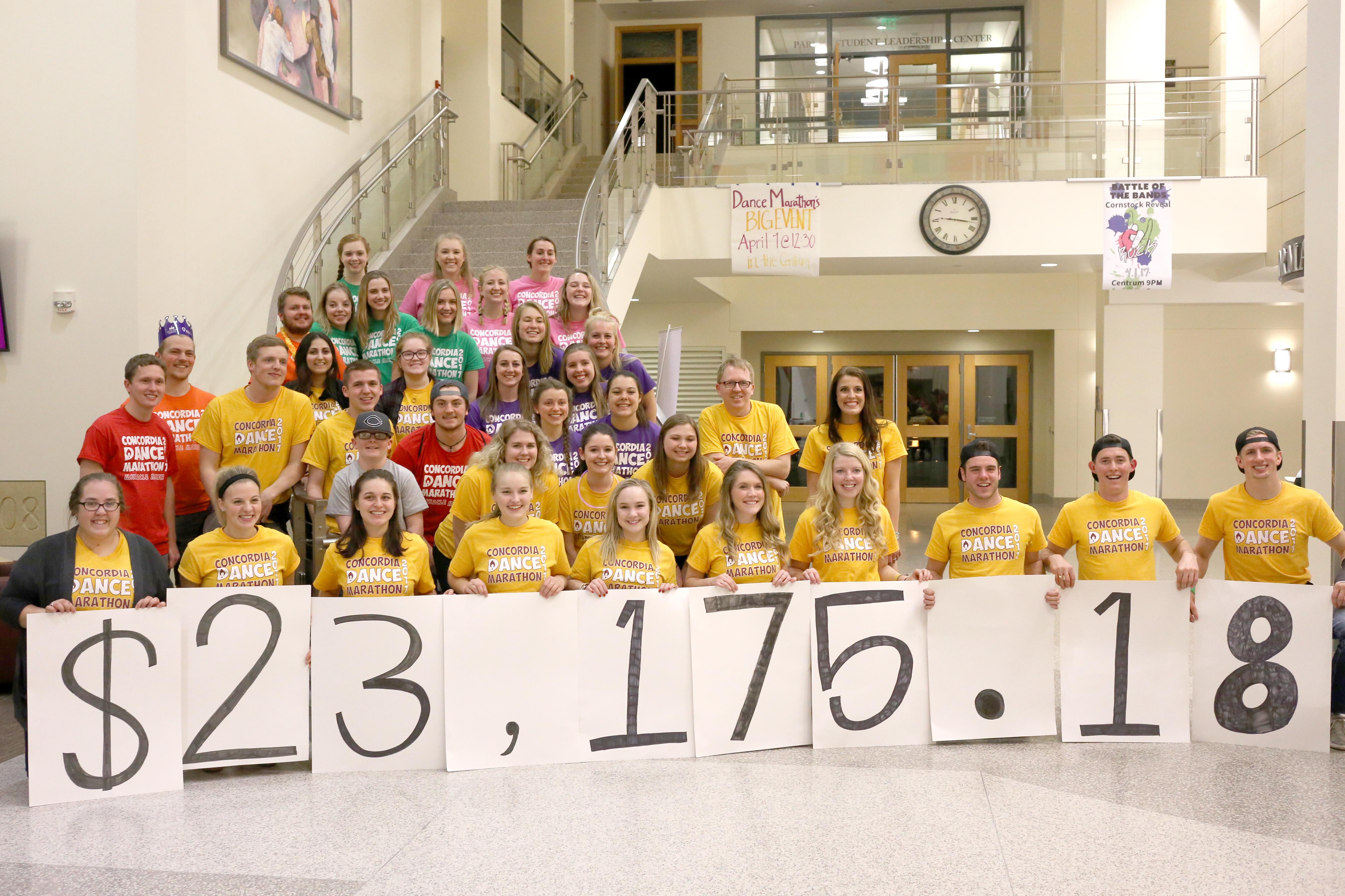 A flurry of colorful shirts could be seen while approaching the Centrum. Getting closer, upbeat music and enthusiastic laughter from students, parents and children could be heard.

On Saturday April 1, Dance Marathon held their BIG Event all day in the Centrum. It was their final event of the year to help raise money for the Sanford Children’s Hospital, where they attempted to hit a $25,000 dollars goal by 10 p.m. This year, the group raised $23,175.81 dollars, almost $6,000 dollars more than last year.

“Our goal, and our mission is to raise money and spread awareness of pediatric illness and injury,” Mackner said. “That’s kind of the Dance Marathon mission. Everything we raise, stays right here locally at the Sanford Children’s Hospital in Fargo.”

Dance Marathon raises money over the year in a number of ways. In the week leading up to the BIG

Those aren’t the only fundraisers that Dance Marathon holds throughout the year.

“We did a chipotle fundraiser a couple of weeks ago. A really, really big fundraiser for us is the FTK [For The Kids] 5k in the fall,” Mackner said.

Any family that has a member who has been treated at the Sanford’s Children’s Hospital in Fargo is invited to the BIG Event.

For the first time this year, Dance Marathon created morale teams. Each team is assigned a captain, and the captain is on the executive team. The captains are in charge of organizing all the dancers and fundraisers on campus. Each team has a miracle kid, and Sanford Children’s Hospital helps Dance Marathon choose the miracle kid.

The BIG Event had different activities to reach out to the different demographics of Concordia’s campus, Dance Marathon wanted to include everyone.

“We want this event to be inclusive to everyone on campus,” Mackner said.

The activities at the BIG Event went from 12:30 p.m. until 11 p.m., but it was not required to stay the whole time. The activities included a ping pong tournament, yoga, an improv group, Zumba, bingo and more.

According to junior Casey Currie who attended the BIG Event, “The Dance Marathon event has been fantastic. From Shelby Singers amazing limbo abilities, to Kate [Rinke] cutting eight inches of her hair off, Dance Marathon is a great student organization, with an amazing cause.”

According to the Concordia Dance Marathon website, Dance Marathon is a great opportunity that allows participants to BREW in the community. Samantha Wiese, DM fundraiser, has seen the impact the student organization has made throughout the years.

“Being a part of such an incredible organization for the past two years, has been a life changing experience,” Wiese said. “To see the way we impact the lives of children through the stories told by the families who attended … makes everything we do worth it. Knowing that all of the money we raise goes directly to helping these kids, whom without this funding may not have survived, puts it all into perspective.”