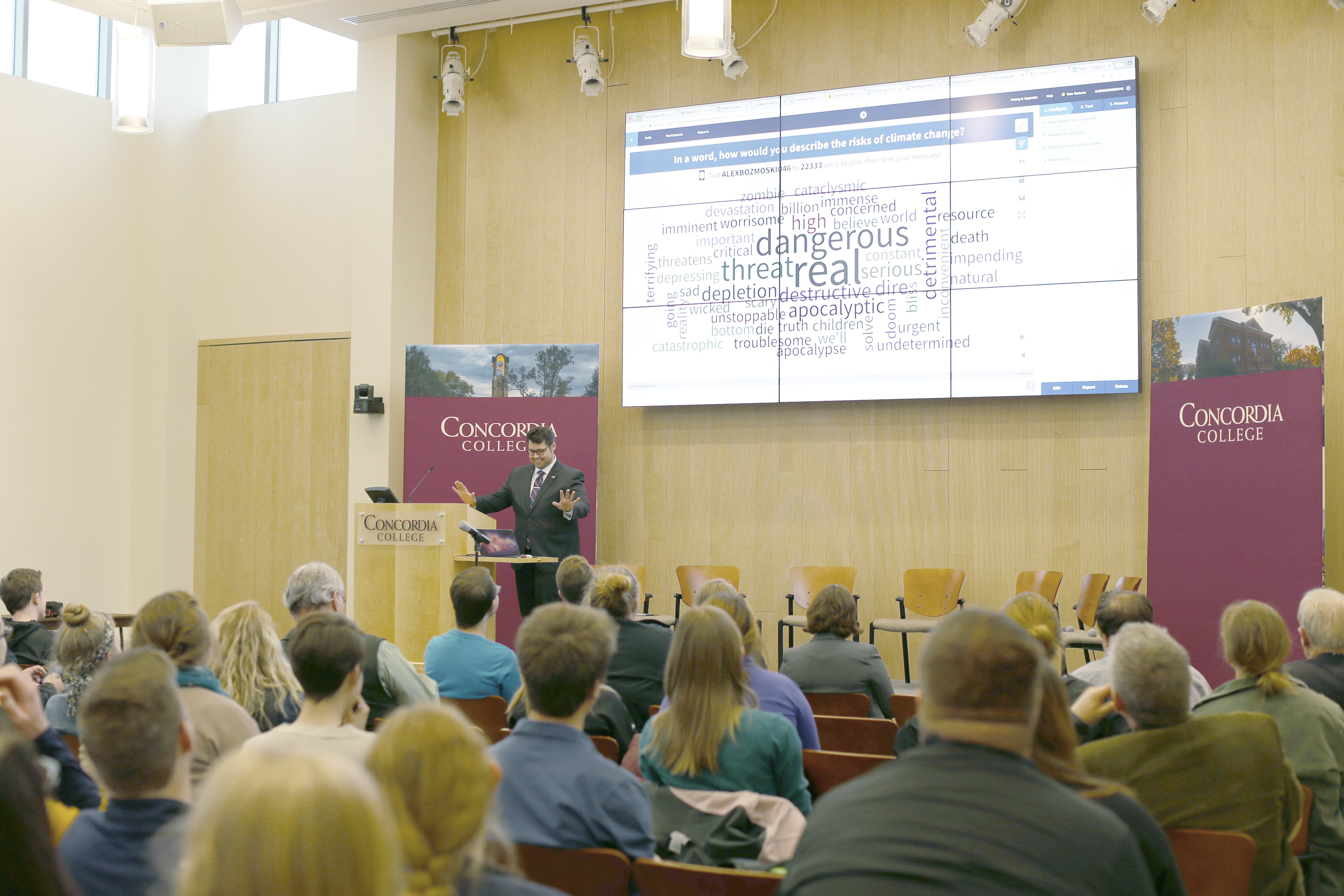 Conservatives Tackling Climate Change, an event held on-campus, welcomed Alex Bozmoski to Concordia on April 11. The event was centered around an open discourse between the Republican and Democratic parties surrounding the issue of climate change.

Bozmoski is the Director of Strategy and Operations at RepublicEn, an organization based on conservative ideologies, pushes the idea that climate change needs to be addressed with free enterprise solutions instead of subsidies and regulations, which are widely being utilized today. Bozmoski received his bachelor’s degree from Georgetown University and his master’s degree from the University of Oxford. Before joining RepublicEn, he worked for four years developing rural energy projects in East Africa.

Liam Nuhring, senior at Concordia and a leader within Concordia’s students organization, Young Americans for Liberty. Nuhring has been involved in a number of politically conservative groups, both on and off campus during his time at Concordia, and was one of the driving student voices behind Conservatives Tackling Climate Change. He finds the organization, RepublicEn, to be an important factor when sparking the conversation about conservatives bringing their ideas to combat climate change to the table.

It is RepublicEn’s desire to create a conservative, eco-focused grassroots movement within the United States.

Dr. Ken Foster, an associate professor of Political Science and the program director of Global studies, also serves on a chair of Concordia’sPresident’s Sustainability Council. Foster played an integral role with the planning of the event. “[RepublicEn’s] focus is not on trying to do regulatory approaches, but rather, use economic incentives to enable us to reduce carbon emissions,” Foster said.

According to Foster, the organization argues for a carbon tax as the best way to combat climate change. Instead of regulations being put in place, such as former President Obama’s Clean Power Plan which set national limits on carbon pollution coming from power plants, there would be a tax, ideally rising by a set percentage every year, based on the amount of carbon that is expelled.

Nuhring said that a carbon tax will prompt companies to use clean energy.

“That tax would then be used as a subsidy for other corporations looking into clean energy, with the ultimate goal of making clean energy into an economic, prosperous route for future growth,” Nuhring said. “The instant that it becomes profitable for private organizations, people, [or] for stockholders to be using clean energy, it’s going to take off, much like the oil industry has. That’s ultimately the goal.”

Foster attributed Nuhring’s desire for an event to be held on-campus as the reason Conservatives Tackling Climate Change happened at all.

“Last semester, Liam was in my Environmental Policy class. We discovered that we had a good rapport, and we also discovered that, even though our political ideologies are very different, we both have a strong interest in taking action on climate change.” Foster said. “So, we talked about how can we get more conservatives to the table. [The event] really came out of his strong interest as a leading Republican conservative on campus; he has always been dismayed that Republicans are not known as environmentalists.”

During the event, after Foster and Nuhring welcomed the attendees and introduced the speaker, Bozmoski used a live polling program, asking those in the audience to respond to a set of questions, in order to gauge the audience. He went on to explain how he gained the views that he has today, the process by which fabricated climate change information is formatted and spread, and finally, why a revenue-neutral carbon tax, an eco-focused conservative grassroots movement, and bi-partisan support of a revenue-neutral carbon tax are the most viable ways to tackle the Earth’s rapidly rising temperatures.

Bozmoski concluded his speech by addressing how only 15 percent of the country trusts the government to do the right thing. According to Bozmoski, the country is fractured, yet the people, no matter which party they affiliate themselves with, need to work together to combat climate change.

“The left has typically tried to fit climate change into the box of the New Deal and the Great Society,” Bozmoski said. “Trying to fit climate change into that box is a mistake; this issue touches every part of the economy, every part of our lives. Energy is in everything we do. Suggesting to the American people that we will control that through centralized institutions has been fundamentally rejected by the voters of America. We have to come together and find a new solution that works for new America, for this America.”

After Bozmoski’s talk, he was joined with a student panel of environmentally-focused and passionate students from Concordia’s campus. The students were Sam Ferguson, Pat Sorrells, Liam Nuhring, Lacy Tooker-Kirkevold, and Brett Drevlow, along with Foster acting as a moderator.

Junior Tooker-Kirkevold is the Co-President of Minnesota Public Interest Research group, a student organization working to promote progressive and sustainable policies in the political sphere.

“I think a lot of the issue behind the climate change debate is that it is so polarized,” Tooker-Kirkevold said. “I think it’s really cool, especially with this event, to see conservatives that really care about the environment. In reality, it spans the whole spectrum; we all want clean water, we all want clean air.”

Senior Ferguson, co-president of the Student Environmental Alliance, also stated that she feels a large piece of addressing climate change is addressing the lack of education.

“A lot of people don’t know about the issues, and even if they do, they don’t really believe them,” Ferguson said.

Nearing the end of the panel, Foster asked the student panelists what they see, as they look at their generation, whether or not bi-partisan consensus with addressing climate change can occur. Ferguson jumped to answer the question.

“I definitely feel that the conversation is happening. Something like this, I would never have imagined to happen,” Ferguson said. “I think having these conversations is important, to humanize the other side. I know these people personally, I’ve talked to them, I’ve had conversations with them, and we do agree on a lot of stuff. Our generation is becoming more aware and engaged with speaking to other people, but I think what we’re missing is this conversation that we’re having. As long as this is continued, I think that it could be successful,” Nuhring seconded Ferguson, adding that parties need to work together as one to address the problem.

“When it comes down to it, there needs to be more cooperation,” Nuhring said. “This very issue starts right here; at the grassroots level. Fast-forward 10 or 20 years, I would love to see this become a bipartisan project, to be working on. Not for the betterment of one party, but for the betterment of our nation, and our globe as a whole.”

2017-04-20
Previous Post: Carbon tax is the conservative solution to climate change
Next Post: Writing critically shows that you care