Review: ‘The Fate of the Furious’

By: Jonathan Immel
In: Reviews
Tagged: action film, disappointment, fast and furious, movie review, The Fate of the Furious
With: 0 Comments 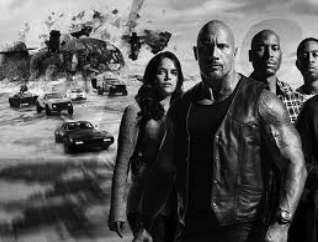 The eighth installment in the “The Fast and The Furious” franchise is more of the same from recent films. A convenience for viewers is that if they have not seen previous films in the series, they can catch on and follow the ludacris action sequences and for the most part, follow the story. If you are a fan of impossible car stunts, and favor those over the story or plot, the “The Fate of the Furious” would be a great fit. It is a popcorn movie that does not engage the audience in the lore or history of the franchise, and will bore anybody who has seen any of the past three “The Fast and The Furious” films.

The film is directed by F. Gary Gray, who directed “Straight Outta Compton,” continues the theatrics and drama of the “Fast and Furious” franchise. The story department, once again handled by Chris Morgan, who has written for the series since “Tokyo Drift,” turns to the cringe inducing soap opera territory that the franchise has become known for. We’re once again introduced to Vin Diesel as Dom Toretto, who places “family,” one of the franchises most important themes, over everything else and still misses Paul Walker’s character. There’s a cyber terrorist, and a very generic villain, named Cipher (Charlize Theron) who plans to destroy the world for reasons that are not clear. She blackmails Toretto, and the movie becomes reminiscent of “Captain America: Civil War” in the way that family and friends have suddenly turned on each other. This feud travels across the globe, notably to the Middle East, Iceland, and Cuba.

When compared to other recent action movies, notably “John Wick: Chapter 2” and “Mad Max: Fury Road,” which have both done a much better job infusing drama, cars, and story together. These movies, and many other action movies, build upon character, wit, and action to create a quality film, but “The Fate of the Furious” has no wit, and with every action sequence significantly takes away from potential to build the series’ reputation. Instead, this film is another biennial car chase action movie to produce for revenue. Despite the movie being as lackluster as past movies in the franchise, there is a possibility that the movie breaks the box office record of opening weekend sales, with some projections at $534 million, which is slightly more than “Star Wars: The Force Awakens” weekend total of $529 million.

With the death of Paul Walker, who played Brian O’Connor in the series, the production staff had to be very particular about handling the on screen character. Instead of mindlessly killing off Walker’s character like many films do with actors and actresses who pass away, the cast members refer to Walker’s character in a way as if he and his onscreen wife are trying to avoid the high octane life of being one of the fast and furious. “Brian would know what to do,” Torreto says wistfully. But Letty (Michelle Rodriguez) rejects the idea, saying that they promised to leave Brian and Mia out of any dangerous activity. This aspect of the film does appeal to the character’s best interest, instead of just killing them off.

One of the series’ thematic touchstones is intact with “The Fate of the Furious,” and that’s the idea of family, a word repeated with lacking dramatic heft about every eight minutes. Sometimes, the word is a sentence by itself: “Family,” says Torretto, his brow furrowed, as he considers his betrayal of his crew, and, family. The audience is supposed to consider such moments with dead seriousness, yet the exact opposite is true of any and all-sense-defying action. Instead, the audience is delivered with a smirk, an elbow in the ribs, a hammer to the head, an anvil falling on our heads, and a car crashing on top of that. Simply put, any potentially moving theme was very poorly executed. The tonal discrepancy in these “dramatic” moments happens throughout the film, taking away any chance of the script sliding into a poorly executed soap opera.

After seeing the trailers for this movie, there was little hope for it; however, in light of how bad the trailers looked, which showed Vin Diesel making out with Cipher briefly as well as snapshots of multiple car scenes, which the movie improved upon those and was surprisingly better than expected. With the same recast as previous films, the family, if I dare say the word again, goes through another ridiculous, story-less adventure. “The Fate of the Furious,” despite potentially breaking box office and franchise records, was a disappointing film, lacking originality and plot whatsoever. This catastrophe of an action sequence “earns” a 5.2/10. If you were to watch a movie this week, pick up “La La Land” on Blu Ray, which comes out on April 25th. Much more worthwhile than “The Fate of the Furious,” or most movies being released to theaters.