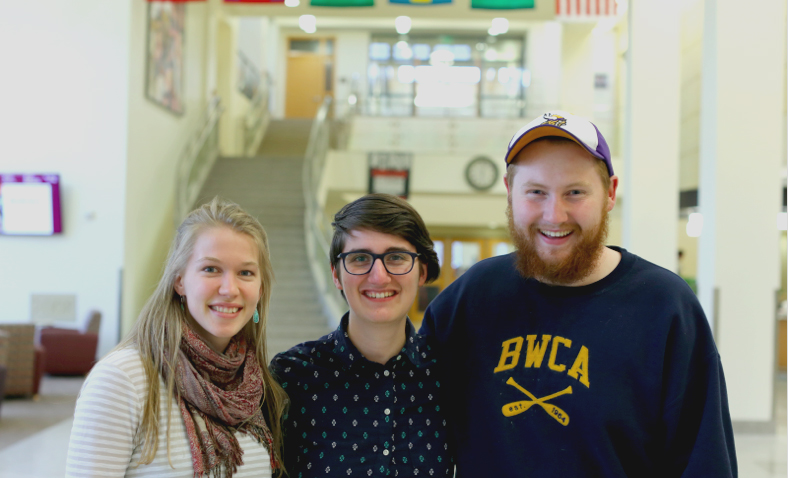 As the majority of seniors prepare for full-time careers or graduate school, three are packing their bags for ten months abroad after receiving Fulbright fellowships.

The Fulbright U.S. Student Program provides grants for individually designed study or research projects for English Teaching Assistant Programs. Jenna Scarborough, Oliver Reitan and Ruth Peterson received the award this year. According to English Professor Jonathan Steinwand, this is the first time Concordia has had three recipients in a single year since 2011.

“Every year, there are about 10,000 applicants for 2,000 awards all around the world,” Steinwand said in an email interview.

For Scarbrough, English writing and global studies major with minors in German and political science, language prerequisites and diversity played a role in selecting her host country.

“The first question I was asked in my interview was why I chose Malaysia, even though I am qualified to go to Germany,” Scarbrough said in an email interview. “I’m sure part of the reason is I actually didn’t feel confident enough in my German skills. However, I also wanted to apply to a country I had never been to before.”

Scarborough explained that she was not able to apply to some places like Russia, where an additional interview in the native language is required. She ultimately went with Malaysia because it is a non-Western country, which she decided she wanted after a positive experience studying abroad in India, and had no additional language requirements.

“Something about Malaysia just felt right. It is also culturally very diverse, with Chinese, Indian and indigenous influence,” Scarbrough said.

Peterson, German and studio art double major, never questioned which country she would apply for.

“I was interested in any program that would get me back to Germany,” Peterson said in an email interview. “I started learning German when I arrived at Concordia and was able to spend the 2015-2016 year at a university in Bamberg, Germany. I absolutely fell in love with the language and the place, so I was eager to return.”

“As a German Ed major, Germany was a natural fit,” Reitan said in an email interview. “I look forward to getting firsthand experience in the German school system.”

Steinwand said the application process involves completing an application that includes a personal statement and a statement of grant purpose, as well as participating in an on-campus interview with a faculty member. Next, the applicant moves through the national screening and host country selection. Concordia’s campus committee provides feedback, but semi-finalists are ultimately named by the national screening committee and finalists are chosen by the host country.

Scarbrough said that after selecting the country, the process of completing her application took almost all summer. She had been told by Steinwand that successful candidates spend around 80 hours alone writing their grant proposals. After interviewing with the Concordia committee at the beginning of the school year, Scarbrough was recommended by Concordia and her application was passed to the Department of State, who recommended her to Malaysia. Her initial interview for host country selection was in October, she was declared an U.S. semi-finalist in January and was officially awarded at the end of March, as were Peterson and Reitan.

“The program begins January 2 with an orientation in Kuala Lumpar for two weeks, followed by a one-week orientation in my home state,” Scarbrough said. “They will give us basic language skills, teaching resources, education on cultural norms and other things that will make the work easier.”

Peterson looks forward to improving her German while learning from the kids she will be working with.

“I’d love to illustrate children’s books someday and I think my year in Germany working closely with children will be an excellent source of inspiration,” Peterson said.

Reitan is also excited to better his German and hopes to help older citizens in the area learn English. He also wants to learn as much about German culture and its school system as possible.

“Using this knowledge, I will be able to better educate my future students here in America,” Reitan said.

Scarbrough said that she looks forward to navigating the area and taking in all aspects of Malaysian culture.

“Penang, Malaysia, is supposed to be one of the foodie capitals of the world. Hopefully, if nothing else, I’ll come back to the U.S. as a super hip and cultured person,” Scarborough said. “But in reality, I’ll probably learn way more than what good food means.”