By: Kirah Loeffler
In: Featured, News
With: 0 Comments 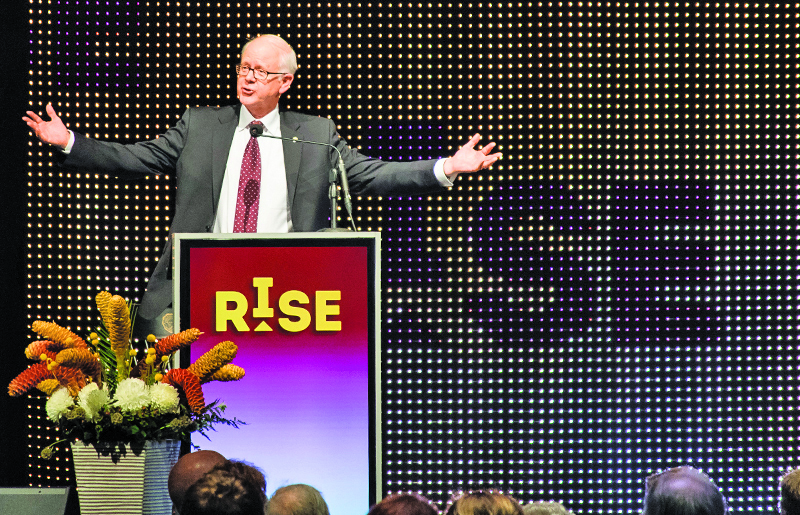 At this year’s Homecoming banquet, Concordia College celebrated the public launch of RISE, the most ambitious fundraising campaign in the college’s history.

Resources raised by the RISE campaign create scholarships to provide access for every accepted student and fund a variety of campus programs and causes. The campaign officially began on May 1, 2011, and will run through Dec. 31, 2019. For the past six years, RISE has been in a “quiet phase,” where the college has worked quietly to raise a percentage of the total goal funds from top donors. There are currently 16,000 campaign participants—just 3,000 short of their goal of 19,000—and leaders of RISE have high hopes for their initiative.

According to Teresa Harland, vice president for the Office of Advancement, the monetary goal of the RISE campaign is to raise $150 million by Dec. 31, 2019. They hoped to reach $112.5 million—75 percent of the total goal—before going public with the campaign. By the time the Sept. 29 banquet had come, they had already surpassed that number.

“We’ve already raised $119 million towards that $150 million,” Harland said. “Funding priorities for the campaign include scholarships, facilities, programs, and endowment. All four of the priorities will help all students now and in the future.”

The goal of RISE is to help students become responsibly engaged in the world by promoting integrative, inclusive, and innovative learning. Funds will go directly to programs and facilities such as faculty development, undergraduate research, fine arts, and athletics, as well as provide financial support for students to help lower the cost of tuition. The campaign will also help fund the brand new Integrated Science Center that was built over the summer.

The public launch of the campaign was intentionally scheduled for the 2017 homecoming banquet, in front of an audience of more than 450 alumni. Eric Johnson, director of alumni relations, believes it is important to keep alumni in-the-loop with current affairs and campaigns happening on Concordia’s campus.

“My job is to keep alumni informed, interested, and engaged in the life of the college. With the campaign, my job is to make sure alumni are aware of the campaign and are invited to participate in it with gifts by giving,” Johnson said. “I’m excited because RISE is an indication that our college is healthy and is moving forward.”

The campaign mainly pertains to the needs of Concordia’s students. Scholarships given to students by RISE take affordability into account of their tuition. Concordia senior Corinne Burrell, who is a recipient of a scholarship made possible by RISE, mentioned that RISE is a sign of how caring Concordia is for their students.

“I think it goes really well with Concordia’s mission statement. Even though this a campaign towards alumni, it’s definitely worth students knowing. It’s an acolyte to Concordia doing so well and trying so hard for their students. It it wasn’t for this scholarship, I probably wouldn’t be at Concordia,” Burrell said.

RISE is close to their monetary goal but aren’t there quite yet. Anyone can donate to the campaign, so to get the word out, RISE is accompanied by a broad marketing campaign. One of the primary elements of this campaign is a seven-minute video produced by the Office of Communication and Marketing, which depicts one student’s journey through Concordia, from her early childhood at Cobber Kids to her graduation day. The video can be found on their new website, which provides more information of what the RISE campaign will go towards, updates about fundraising progress, and an in-site option for donating.

Donations given to RISE can be accepted at www.riseforconcordia.com or by phone at 218.299.3442.