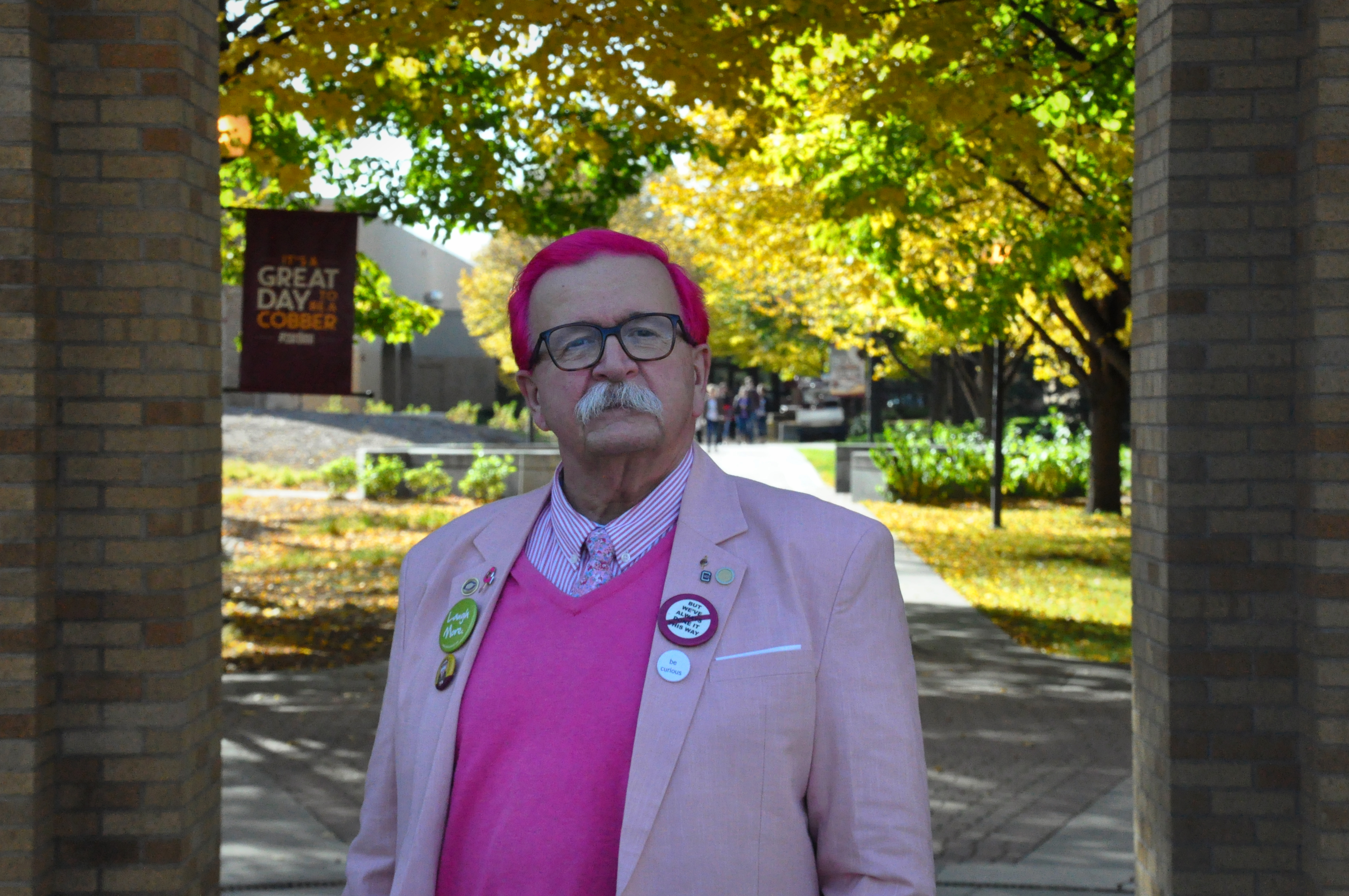 With his famous moustache and button-bedecked blazers, Associate Vice President and Chief Information Officer Bruce Vieweg is one of the most recognizable figures on Concordia’s campus. This October, Vieweg took on another identifier: hot pink hair.

Vieweg went pink for a fundraising campaign called Real Men Wear Pink, hosted by the American Cancer Society. The goal of Real Men Wear Pink is to give men an opportunity to help in the fight against breast cancer by having communities nominate local male leaders to spearhead fundraising efforts.

The event runs for the month of October, which marks Breast Cancer Awareness Month. As Real Men Wear Pink candidates, men commit to wearing pink throughout the month, raising awareness for the cause through social media and fundraising for the American Cancer Society with the goal of reaching a minimum $2500.

Katie Pipinich, a 2010 Concordia graduate who currently works for the American Cancer Society, fondly remembered Vieweg from her time as a student and invited him to become a part of the fundraiser.

“I reached out to Bruce because he is such a kind and generous man,” Pipinich said, “He always thinks of ways to improve the lives of everyone around him. I was lucky to have been acquainted with him during my time as a student at Concordia but I have gotten to know him so much better during his campaign. I also know that he isn’t afraid to wear pink.”

Vieweg accepted Pipinich’s invitation, inspired by his own personal connection to the campaign.

“The fact is that my wife is a 10-year survivor of breast cancer and it just resonated with me, so I said sure,” Vieweg said.

Vieweg’s original plan was to wait until he had reached the fundraiser’s goal of $2,500 before he dyed his hair pink, but when he was just a few hundred dollars away, he thought “why wait?” With the help of his wife, Vieweg was able to dye his hair pink.

“Raising awareness is easy when you have someone as dedicated as Bruce walking around with hot pink hair,” Pipinich said.

“I think it’s really cool what Bruce is doing to help out the Fargo-Moorhead community, especially since he is so dedicated to the cause,” Werrell said. “I haven’t been directly affected by breast cancer, but hearing about my best friend’s aunt go through cancer treatment makes this a much more important cause, and to see what Bruce is doing to help is really amazing.”

Vieweg has also received positive responses from the Fargo-Moorhead community. Every morning on his way to campus, Vieweg stops at a Loaf ‘N Jug in Fargo for a large Diet Coke. On Oct. 31, the last day of the Real Men Wear Pink campaign, the cashier handed him an envelope addressed to the “Pink Professor”–the employees at the Loaf ‘N Jug had taken up a collection to help Vieweg reach his goal.

“I’m a pretty emotional person … nearly had tears in my eyes for their amazing generosity … for their friendship … for the depth of their caring,” Vieweg wrote in a Facebook post.

2017-11-02
Previous Post: Nadia Bolz-Weber speaking on campus for 500th anniversary of the Reformation
Next Post: Watkin to assume new role as director of First-Year Experience