‘It’s the message behind them’: Students, faculty react to signs

By: Katelyn Kasella
In: Campus, Featured, Nation, News
With: 2 Comments 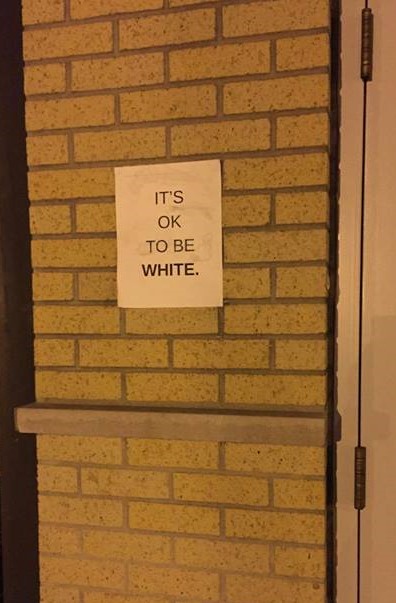 On Halloween night, posters stating “It’s ok to be white,” appeared around Concordia’s campus. Although they have since been removed, students and the community are still trying to make sense of the incident.

The signs, cited as racist and bigoted by multiple students, were spotted on lamp posts, residence halls, and multiple buildings around campus. While it is unclear how many posters were hung up or who was behind the incident, Student Government Association President Ahna Van Valkenburg confirmed that the incident is currently under investigation.

According to the Washington Post, the idea for the signs originated on the online chat space 4chan last month as an attempt to feed social unrest and sway white Americans to far-right ideologies. Along with Concordia, the signs have been spotted in Rocky River, Ohio; at Montgomery Blair High School in Silver Spring, Maryland; at the Harvard Yard in Massachusetts and at the University of Alberta in Canada. As for other colleges in the area, students at Minnesota State University Moorhead and North Dakota State University say there were no posters hung around those campuses.

While the posters at Concordia were quickly removed by students who found them, pictures of the incident quickly surfaced on social media and different groups on-campus took action.

Junior Anita Ukpokolo, co-president of the Black Student Union, said that the organization provided a safe space on Wednesday morning, Nov. 1, for people to come in, talk and evaluate the situation.

“Some people came and just generally did not know why people were upset about the signs and wanted to know,” Ukpokolo said. “The background of the statement is all you need. You don’t even need to ask people why they’re offended. If you do just a little bit of digging, you will understand why people are offended.”

At 1 p.m. on Wednesday, the SGA executive team met with Mikayla Clements, lead commissioner of the Diversity, Equity and Inclusion Commission, to discuss the situation.

“We started drafting an email, and we knew an email would just be a first step,” Van Valkenburg said. “We had a lot of conversations with students who were upset. It’s hard because it’s not the posters, it’s the message behind them, and it’s especially how they made students feel on campus.”

Van Valkenburg explained that while the posters’ words were not inherently incorrect, the statement that they were making was problematic.

“From conversations with students, it’s similar to the ‘All Lives Matter.’ So yes, that’s true, but put into the political context of the nation, it wasn’t saying all lives matter, it was shutting down a movement,” Van Valkenburg said.

“It’s never been wrong to be white in America … but it’s just something that minorities struggle with. It’s a power dynamic,” Clements said. “The majority of the people haven’t lived those experiences of power differences. We have to think with empathy and listen to those who have.”

SGA released a formal statement shortly before 6 p.m. on Wednesday evening, stating that the organization “strives to provide Concordia’s students with an inclusive and safe environment for all identities. We encourage any student who has a political statement to make, to do so in a respectful manner. The means of which this individual or these individuals publicized their viewpoint does not promote inclusivity and civil discourse”.

President Craft sent a statement to students and faculty around the same time, in which he affirmed principles held by Concordia, including the safety and dignity of everyone and the importance of civil discourse. He also stated that the signs did not follow the college’s display policy for hanging posters.

“But following our policy is not enough,” Craft said in the email. “We must reject silences that demean and exclude, and we must engage open conversation about the experience of race on this campus and beyond.”

Dr. David Creech, professor of religion, said that while he appreciated the way Craft framed many of the issues, he was not satisfied with the email as a whole.

“I think the overall tone of the email was one of caution and not wanting to offend someone who put up the signs,” Creech said, adding that he felt the importance of conversation and uniqueness of this situation were minimized.

Ukpokolo believes that both emails from SGA and Craft failed to reach out to the minority groups that were most affected.

“It kind of just felt like it was [silencing] the students who felt attacked,” Ukpokolo said. “I’m disappointed, but I’m still grateful they acknowledged this as something important to talk about.”

Clements, on the other hand, was very satisfied with the way that students and administration reacted.

“It’s a tough situation to respond to,” Clements said. “I think they responded very quickly and were very thoughtful about their response.”

On Thursday, Creech hung up posters around campus that countered the original statement, bearing the words, “It’s not okay to be that kind of white.” They were removed within an hour.

SGA, in concert with President Craft and the Office of Diversity, hosted a public forum regarding the signs on Tuesday evening. The event included small-circle discussion and the opportunity for people to voice opinions and ask questions.

“It’s a space for listening, really. And it’s also a space for starting the conversation,” Van Valkenburg said. “We hope it’s the first event of many.”

Ukpokolo hopes the forum allowed for a shared-learning experience, and “an opportunity to start thinking differently.”

Creech believes the conversation offered a chance to spark culture change at Concordia, and envisions larger changes in the college moving forward.

“I think there needs to be training for our faculty for dealing with diversity, white privilege, and how to make these topics more prevalent in our classes,” Creech said. “I think we have a lot of work to do and probably are not focused on it as urgently as we need to be. And I think an incident like the signs reminds us of that.”