By: Emilee Moeller
In: Campus, Community, Featured, News
With: 0 Comments 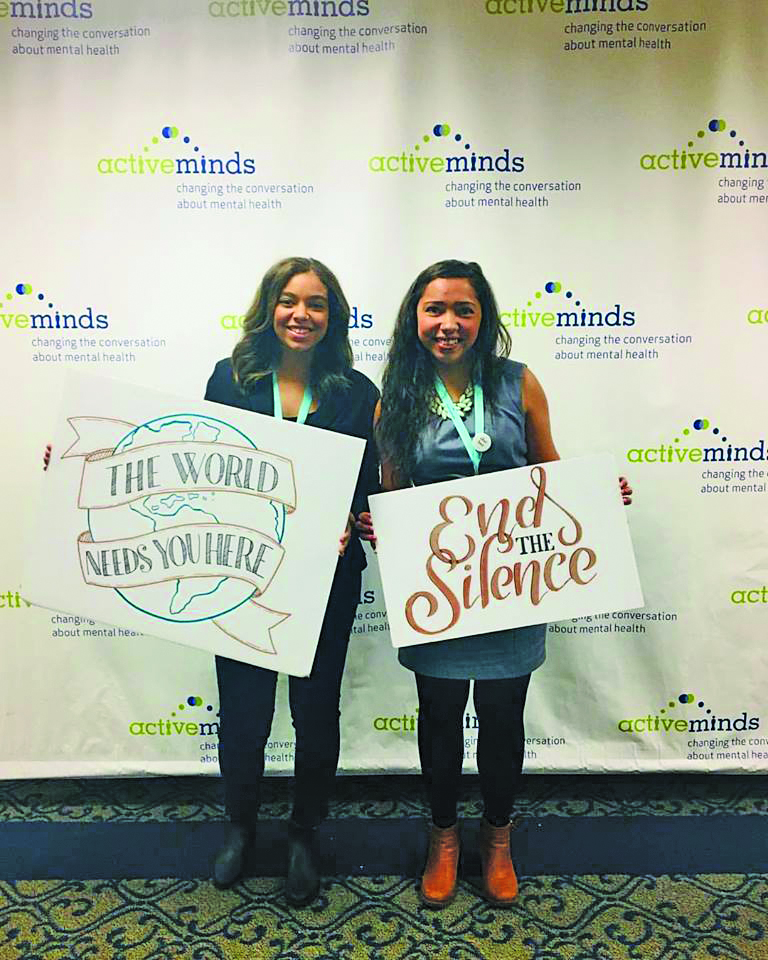 The week was dedicated to highlighting ways to improve one’s mental health, as well as working to combat stigma surrounding those who struggle with mental illness. Events included mental health yoga, various speakers, tabling in the Atrium, and a student panel discussing mental health.

Natalie Rivera, president of Concordia’s chapter of Active Minds, and Mikayla Clements, vice president of the group, both attended Active Mind’s national conference in Washington, D.C. from Nov. 3 to Nov. 5. Keynote speakers at the conference included Taylor Nolan, who appeared on “Bachelor in Paradise,” and Kevin Briggs, better known by his nickname “The Golden Gate Guardian.”

“It’s a way to share ideas,” Clements explained. “It’s a way for the organization to come together as a whole, and see what other people are doing at different schools, so you can bring that home with you.”

According to Rivera, the conference helped broaden their perspective of Active Minds’ work, and gave them new ideas of activities and programs to implement at Concordia.

“We got to meet a lot of different leaders of Active Minds chapters, and got to see all of the events that they do, and how they differ from us,” she said. “Oftentimes, we aren’t aware of the big pieces moving in the world, because you get sucked into your own little bubble. It was so refreshing to be around passionate individuals, focusing on mental health, and it gave some new creative vibes to things we can do at Concordia.”

One of the defining aspects of this year’s Mental Health Awareness week was the amount of collaboration between Active Minds and other prominent organizations on campus, namely Student Government Association and Campus Events Commission. Hayley Broich, the service commissioner of CEC, played a formative role in getting Jeff Yalden, a mental health motivational speaker who gave a talk on Nov. 8, to campus.

Last May, Broich worked closely with Clements after learning that Active Minds wanted to host a keynote speaker on campus for Mental Health Awareness week.

“Part of my repertoire of events are awareness speakers, so Mikayla and I collaborated on that,” said Broich. “It’s a type of event that CEC is more well-versed in the process of. We also get to work with an organization like Active Minds that is so specific and so focused on mental health awareness, which is really neat.”

According to Rivera, other pieces of this year’s Mental Health Awareness Week that set it apart from ones of the past were the increase in events, which led to an increase in different perspectives surrounding mental health in college students.

“It was cool to add different perspectives, we partnered with Better Together for the first time, and that was a new perspective, too: faith and mental health,” she said. “Something encouraging was seeing that, and hopefully providing for students, new perspectives, so that if you are from a certain part of campus, and it’s easier for you to understand mental health within your own sphere of knowledge and interest and lingo, hopefully we were able to reach out to more students in some way.”

Clements explained that a large factor in her motivation for Active Minds, as well as events like Mental Health Awareness week, is knowing there are students on campus who struggle with mental illness, and being aware of the ramifications that come when people are struggling and do not feel supported.

The need for this kind of awareness has only increased this year, as Concordia continues to mourn the passing of sophomore Eli Johnson, who died by suicide in September.

“I think especially this year, with Eli passing away, it goes to show that yes, this is a prevalent thing that happens on campus,” she said.

Clements explained that in some cases, when an individual does not show that they are struggling with their mental health, outreach can play an important role in a student getting the help that they need.

“Even if we just get that one student through this whole week, as long as one student feels like there’s hope or that there is help, that’s the goal,” she said. “It’d be a disservice to people to not show support.”

Broich explained that mental health is something that is incredibly close to her, because of those around her who do struggle with the stigma surrounding mental wellbeing.

“I personally have never been diagnosed or medicated, but I live with and love people who have,” she said. “Especially on a college campus, it’s a really hard age for people, and people come from all different backgrounds. It’s wonderful, seeing how active Concordia students are, specifically in Active Minds, to counter the stigma surrounding mental health.”