By: Annie Weier
In: Events, Variety
With: 0 Comments 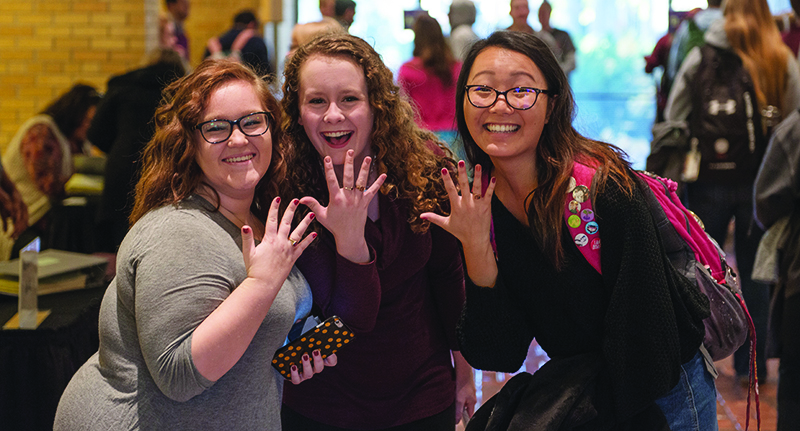 From the belltower superstition to the applause in Anderson Commons after an exit through the emergency doors, Concordia is full of traditions–but none so shiny as the tradition of the Cobber ring.

The Cobber ring represents Concordia and offers connections around the world. But due to its steep price, many students are deterred from purchasing one. The controversy is only talked about once a year, and some think it strengthens the community while others believe it is divisive.

Nearly every year around mid-November, the Cobber ring becomes a point of contention on campus. Some students feel that the ring is too expensive, ranging anywhere from $630 to over $1000, according to the Cobber bookstore; and the Ring Day event excludes those who cannot afford it. Ring Day is an event where current juniors and seniors who have chosen to purchase a ring receive their ring, and there are opportunities to take photos with classmates and Kernel Cobb. President Craft also addresses the students. However, others believe the price is worth it and it brings the Concordia community closer together.

Senior Amanda Randall, a first generation college student, said she chose to buy the ring because it is a source of pride.

Because Randall is graduating in December, the ring holds significance for her now more than ever. It is not only a reminder of her accomplishments, but has the potential to start conversations and open doors in the world outside Concordia.

“When you have this Cobber Ring, you know that you have endless connections, endless conversation starters. You have a duty to this school, to uphold the image we’ve worked so hard to cultivate,” she said.

However, junior Haylee Worm said that Cobbers need to be reminded that the ring is a privilege, not a right, and that the high price of the ring divides campus.

“Although I like the idea of a Cobber Ring, it immediately shows two groups of people on campus: those who can afford it, and those who can’t. When you’re wearing it, you should look at it as a privilege, not something you should just have because you’re a Cobber,” she said.

Every Concordia graduating class has had their own class ring, but until 1920, each class designed their own. In 1920, the familiar ruby and gold design became the standard, and for nearly 100 years, the same ring has been presented to each class. As a result, the rings tie the Concordia community closer together and are easily recognizable around the world. Yet some say this also places pressure on Cobbers to buy the ring, even if they cannot afford it.

“To make it an expectation, that everyone gets a Cobber ring, makes those who just can’t feel like they aren’t meeting the expectations of a happy, perfect Cobber, ” Worm said.

For Kat Nicholson, a Concordia senior, the expectation has been there nearly her entire life. 13 of her family members have attended Concordia, including her grandparents, parents, and siblings. But she began college at a different school, and transferred her sophomore year. While there were many factors that played into the switch, the ring was one of them.

“My sister had gotten her ring my freshman year. That Christmas when I came home, I saw her Cobber ring, and she was so excited. I was already thinking of transferring, but I decided it then, after talking it over with my family. I feel like it was partially because of the ring, but that sounds really crazy,” she said.

To her, the Cobber ring tells the story of her journey and relationship with Concordia, and represents a connection to the larger Cobber community.

“To me, the ring means a community. It makes me feel even closer to here. I’ve had a very rollercoaster relationship with Concordia. I’ve felt stabbed in the back by Concordia, many times. But to me, this ring does really mean a community, because the relationships you build are the best part of this school,” she said.