By: Sarah Herlihy
In: Art, Events, Variety
With: 0 Comments 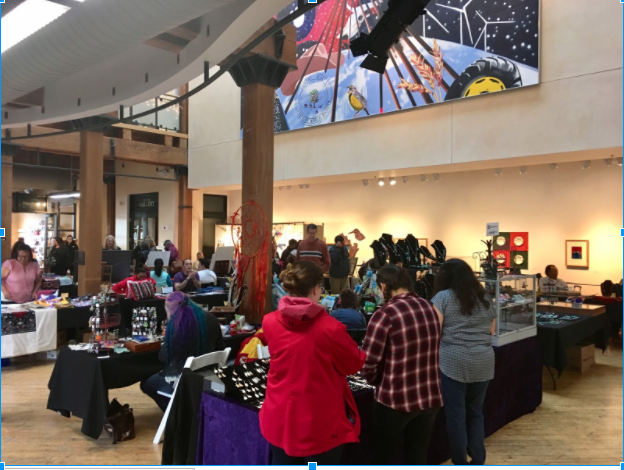 As part of their Creativity Among Native American Artists initiative, Fargo’s Plains Art Museum partnered with the Fargo Public Library, Daughters of the Earth, and Cultural Diversity Resources to celebrate Native American Heritage Month with their first Native American Festival from Nov. 4 to Nov. 11.

CANAA is an initiative focused on integrating Native artists from Minnesota, North and South
Dakota, and Wisconsin into the Museum’s ongoing activities, developing a network to link them to the resources of the museum, and provide them greater opportunities to share their work with broader audiences.

According to Andrew Maus, CEO of the Plains Art Museum, the initiative began in the hopes of raising awareness and support for Native American artists in the community.

“One of the things that we saw that compelled us to start this initiative years ago is that…Native communities don’t have the same systems of support that some other communities do,” he said.

The festival opened on Saturday, Nov. 4 with a symposium at the Fargo Public Library by Fargo mayor Tim Mahoney and a traditional welcome by Native Americans, followed by a session with Darlene St. Clair, a professor at St. Cloud State University. A cultural lunch was provided by Daughters of the Earth, complete with fry bread and bison stew, and the day ended with a performance of storytelling and singing by a mother-daughter duo, Anne Dunn and Annie Humphre. Bob Shimok, director of the White Earth Land Recovery Project, spoke on Sunday, Nov. 5.

As the week progressed, two of producer Deb Wallwork’s films were featured at the Fargo Public Library. “Mino-Bimadiziwin: The Good Life,” a documentary following the lives of an Ojibwa community on the White Earth reservation in Minnesota, was shown Tuesday, and “Warriors,” a documentary that describes the experiences of racism and trauma of Native American soldiers in the Vietnam War, was shown Wednesday. Brief group discussions occurred with Wallwork afterwards on both days.

On Thursday, in correlation with the “Art of the Resistance” display at the Plains Art Museum, dedicated to the awareness of life’s dependence on the earth, Anishinaabe author and economist Winona Laduke of the White Earth reservation spoke on today’s environmental issues. As a national speaker, her presence was greatly appreciated to assist the museum’s mission for the festival.

“It’s just sort of an extra level of coordination with others so that we can really bring attention to … not only Native American Heritage Month but also the importance of indigenous people in our region,” Maus said.

The festival’s concluding event occurred on Saturday, Nov. 11 at the Plains Art Museum. The Native American Juried Arts and Crafts event hosted artists from across the Midwest to sell their art, which included beading, woodwork, sewing, and metalwork. Native American food was provided and a station to create your own free “God’s Eye” (a symbolic handmade yarn and stick craft) was available. According to Laura Youngbird, the Director of Native Art Programs at the museum, the Juried Arts and Crafts event was smaller last year due to a snowstorm. This year, however, almost 20 booths were up, among them award-winning artist Nelda Schrupp.

The highlighted Native artist of the Festival was Fritz Scholder, born in Breckenridge, Minnesota. His “The Buffalo in the American Living Room” is not a stereotypical collection of Native American art, but neither are many of the museum’s pieces. Youngbird expressed her thoughts on the piece’s style and the museum’s noticeable shift, shown through the increased amount of contemporary pop and minimalism in their both their Native and non-Native exhibitions.

“Art is an expression of any culture, and it evolves and changes,” Youngbird said. “And what is particularly exciting to me at the Plains Art Museum, is that we’re a contemporary art museum … I’ve heard of artists who enter work into a Native show, and it’s like, ‘that’s not Indian enough.’ Well, by who’s definition? … the ‘Buffalo in the [American] Living Room’ is about that kind of issue.”

Maus agrees that The Plains Art Museum is challenging the ideas of traditional Native American art, but that it is a change for the better.

“Some of the most compelling and highest quality things we’re doing right now is with Native artists,” Maus said. “There’s the misconceptions of what it means to be a Native artist, meaning that you have to create a certain kind of work in order to be perceived as an authentic Native American artist. There is a lot of value to sustaining those practices, but there is also a lot of value to advancing people’s ideas of what it means to be something.”

According to both the Maus and Youngbird, responses to the initiative from both the Native and non-Native populations in the Fargo-Moorhead area have been positive. Youngbird has built a network of artists and organizations that sustains and cultivates Native American art and which currently consists of 175 artists just three years into the initiative with 60 organizations both in reservations and outside.

“The museum has taken pretty big steps. We have an important funder of the project that allows us to think big, so the last three years we probably spent $150,000 annually on the initiative alone,” Maus said

The artists are paid by the museum for their time and work, but a lot of the artists from this region travel to the established markets of Santa Fe, New Mexico because of the lack of willing buyers here.

“If Native people are selling stuff in a community they’re also in poverty themselves … they will share with their friends, but you can’t make a living as an artist,” Youngbird said.

After the completion of the festival, the Plains Art Museum will analyze the week, review its goals, and look at community engagement to determine if it will occur again next year.

“Our interest is in using [resources] in as many ways as possible but in an increasingly inclusive way, and I think that if others thought the same way, we could build a more inclusive society,” Maus said.

The Creativity Among Native American Artists Initiative will continue throughout the year, with more events at the Museum. “The Regalia: Recent Work by Linda Whitney” gallery and Fritz Scholder’s “The Buffalo in the American Living Room” exhibit will be displayed through Jan. 13, 2018.