‘We Wear Beanies Too’: students host sit-in to address diversity 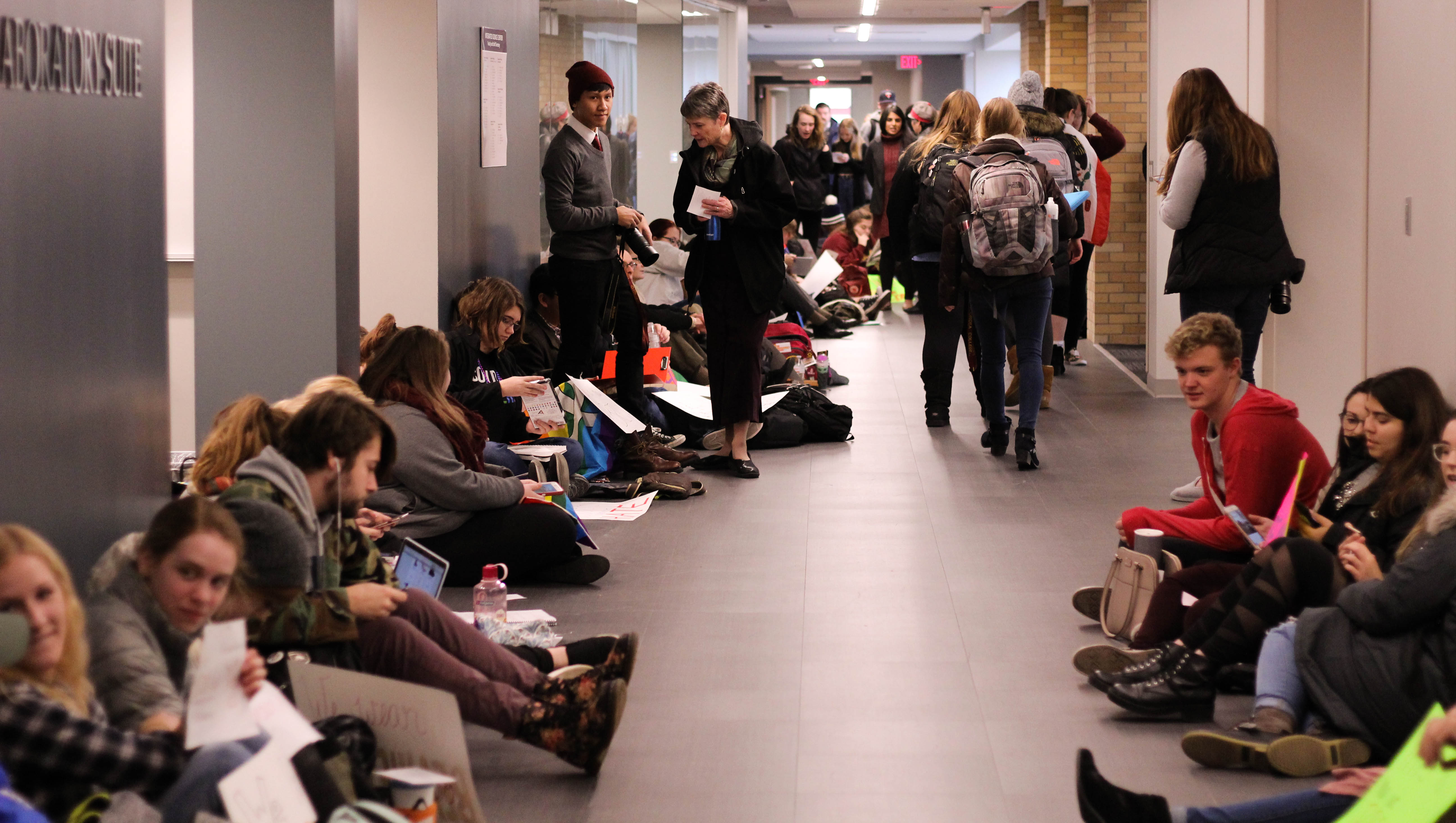 Students, staff, and faculty of Concordia occupied the main hallway of the Integrated Science Center on Nov.16, in a sit-in protest denouncing the lack of action taken by the college to address diversity issues on campus.

“I feel like it went really, really well,” said Grace Bryan, a junior at Concordia and a member of a student group called We Wear Beanies Too, which was responsible for planning the event. “A big fear of mine going into this was that nobody was going to show up, which was not the case.”

The five goals of the protest were to urge the school to establish a clear anti-hate speech policy, to keep Diversity Coordinator Amena Chaudry’s office in the Parke Student Leadership Center where it is accessible to students, to initiate curriculum change around diversity courses, to utilize orientation week as a time to introduce students to minority support services, and to create a committee to reinvigorate the King Intercultural Center, which is currently located in the basement of Park Region Hall.

“Each binder was dedicated to a specific initiative of ours. We asked for people’s signatures so that we could show faculty and staff the support that we had,” Bryan said. “Each binder got around 140 signatures. My best estimate for how many attendees we had was probably in the range of 150 to 200 people.”

Sara Villalobos, a sophomore at Concordia and another member of We Wear Beanies Too, explained that the five goals were established in part because of the perceived passiveness of the school toward the lack of diversity on campus.

“Diversity in general is something that is spoken about like we’re going to do something about it, but from what we’ve seen, it’s all been talk. What we’re looking for is action. We’re really tired of the passiveness of the whole situation,” she said.

Students chose to participate in the protest for a variety of reasons.

“I’m here because this affects me directly, as a person of color,” said Danna Salinas Merales, a freshman on campus.

Junior Colleen Egan explained why they attended the sit-in.

“I’m here to support a cause that is wanting equality, strength, and support in the community, and recognizes the diversity in the student body,” Egan said.

While the organizers of the event were students, staff and faculty also participated in the sit-in to show their support.

“Why am I here? Because there is a problem, and we need to be having these sorts of conversations,” said Dr. David Creech, assistant professor of religion. “I want to support the students as they try to create the conversations.”

“I think these are very important discussions, but it’s also time that we move past discussions and move towards some real action toward making this place not only more diverse, but of course more welcoming to students, faculty, and staff of diversity as well,” he said.

Dean Eric Eliason was also present for a long duration of the sit-in, walking up and down the ISC hallway with a notebook, asking students directly what Concordia can do to be better, as well as why they were choosing to protest.

Two weeks out from the protest on Nov. 16, organizers of the event remain positive and hopeful.

At a senate meeting on the night of the sit-in, Student Government Association voted on a position statement in support of the We Wear Beanies Too movement, their advocacy for ethnic minorities on campus, and their right to peacefully protest. Villalobos and Sade Allison, another prominent member of the We Wear Beanies Too committee, are to meet with President Craft soon, as well as SGA President and Vice President, Ahna Van Valkenberg and Will Kuball. The committee has also received support from orientation regarding their fifth goal.

“We are thankful to the administration, and to faculty and staff, for their willingness to work with us,” said Bryan. “This protest wasn’t about ‘sticking it to the man’; a lot of it was about community healing, and giving students an opportunity to let their voices be heard, and to feel like they’re doing something on campus. We are super thankful to the administration and their willingness to work with us throughout all of this, and just hearing out our voices.”