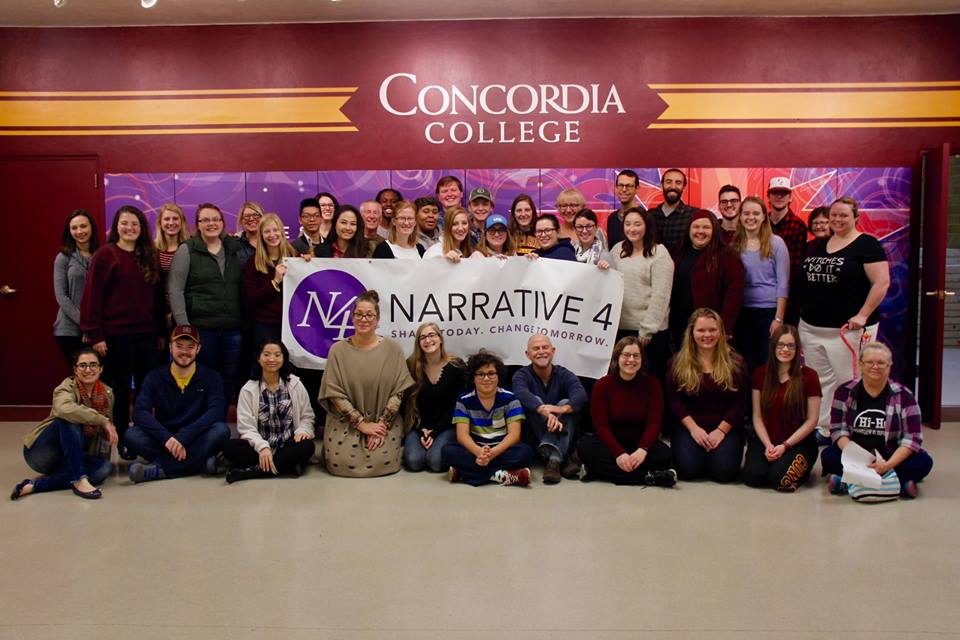 Faculty, students, and community members from all different backgrounds came together on Nov. 16 and 18 to participate in Narrative 4’s story exchange on the topic of difference. The event was a part of the Concordia Narrative 4 chapter’s plan to host a story exchange every month.

According to senior Shawn Deegan, the student president of the chapter, 34 participants ranging from 10 to 59 years old attended the exchange. Deegan helped facilitate the event and modeled a story exchange with Narrative 4’s faculty advisor, Dr. Dawn Duncan, on Thursday. As per the event’s theme, Deegan shared a story about how he felt different from his family in choosing to attend college. Deegan said he hoped his demonstration would help participants feel comfortable sharing their own experiences of difference with others.

“I shared my story with around 34 strangers, a serious story about a real challenge in my life,” Deegan said. “The exercise is meant to help the participants understand the process and feel comfortable, but also to let the participants know that we are being open with them too.”

After Deegan and Duncan’s demonstration, participants and their partners shared their own stories with one another, taking notes and actively listening. On Saturday, the group would reconvene and partners would present one another with a visual representation of the others’ story. Then, each participant would tell their partner’s story to the large group in the first person. Deegan said that it is common for Narrative 4 participants to experience some trepidation at the idea of sharing personal stories with their partners. Even more daunting: the task of retelling a story.

“There is always major apprehension and fear,” Deegan said. “Participants talked about how they were worried about what their story would be and how they could do justice to their partner’s story.”

However, Duncan said that the goal of story exchanges is not necessarily to recant with technical accuracy, but rather to capture the emotional truth behind someone’s story. She also said that participants can respect their partners’ stories by being attentive.

“I do think that the way that we try to approach this is by valuing each person in the group, so we want variety and difference in the group,” Duncan said.

Although the story exchange was full of different perspectives, Duncan said that many of the stories touched on five different issues.

“Those five areas are identity, immigration, faith, the environment (physical and social), and violence,” Duncan explained. “Most of our stories focus on those issues because they seem to be the five areas that are in most need of empathy. Maybe we will be able to begin to start working to solve some of these issues.”

Narrative 4’s intern Sabina Beck, a Concordia sophomore, said that she believes the first person narrative that participants use to tell their partners’ stories is integral to the barrier-breaking nature of story exchanges.

“That’s the part where radical empathy comes in,” Beck said. “It’s really hard to view someone as someone different and separate from you when you’re stepping in their shoes and saying their story from a first person perspective.”

“Interns will learn the science behind story exchanges and how to organize them,” Duncan said. “They’ll be learning from the ground up. I’m really excited to see student leadership, agency, ownership of the college’s core through Narrative 4.”