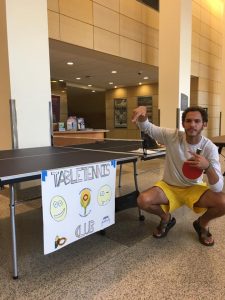 “A lot of good table tennis was played, but I was lucky enough to come out on top after a couple tough, close matches,” Schneck said.

Schneck’s first-place finish earned him an Amazon gift card, as well as bragging rights for the rest of the semester. Erik Porter won the consolation bracket, taking home a Starbucks gift card.

Senior Scott Schwandt, who lost to Engum in the semi-finals after breaking his racket, applauded Porter’s win.

“Erik Porter had a great attitude out there. He did great,” Schwandt said.

The fall tournament marks the first competition for the organization since their founding last semester. Engum is happy with the success of the tournament and looks forward to hosting more in the future.

Table Tennis Club currently meets every Wednesday night at 9:00 p.m. on in Olson Forum. However, Engum wanted more involvement for the organization, which is where the idea for a tournament spurred from.

“I really wanted the club to do more than just meet once a week and to become a talking point on campus,” Engum said. “So, I decided we needed to do a few different tournaments throughout the year.”

Table Tennis Club has grown quickly since its creation in the spring semester of 2017 by Engum and now-junior Will Kuball. After developing a constitution for the club, Engum and Kuball brought in junior David Supinski as treasurer.

The three addressed the Special Projects and Initiatives Fund Committee in search of funding as an organization. The club was granted $900 to get started. This funding was used to purchase tables and general supplies to get the club up and running for student participation.

Engum encourages involvement of those looking for a fun, stress-free night.

“In order to be a member of the Table Tennis Club you just have to show up and want to have fun,” Engum said. “We provide paddles, balls, music, and a rockin’ good time!”

The club averages around 25 students a night, but have had up to 40 on their busiest nights. Schneck is pleased with the numbers the club has seen.

“One of the best things about the club for me is the fact that participation in the club ranges across all the different demographics of Concordia, from the music students to the athletes,” Schneck said. “Everyone is just there to play some table tennis and have a good time.”

Engum, Schneck, and Supinski look forward to a semester of table tennis and hope to see a growing involvement of students.

“In the eyes of the club leaders, this semester has been a huge success,” Schneck said. “It has been an absolute blast to see the enthusiasm surrounding this young club.”

No better stress reliever for students than some good, old-fashioned competitive table tennis.