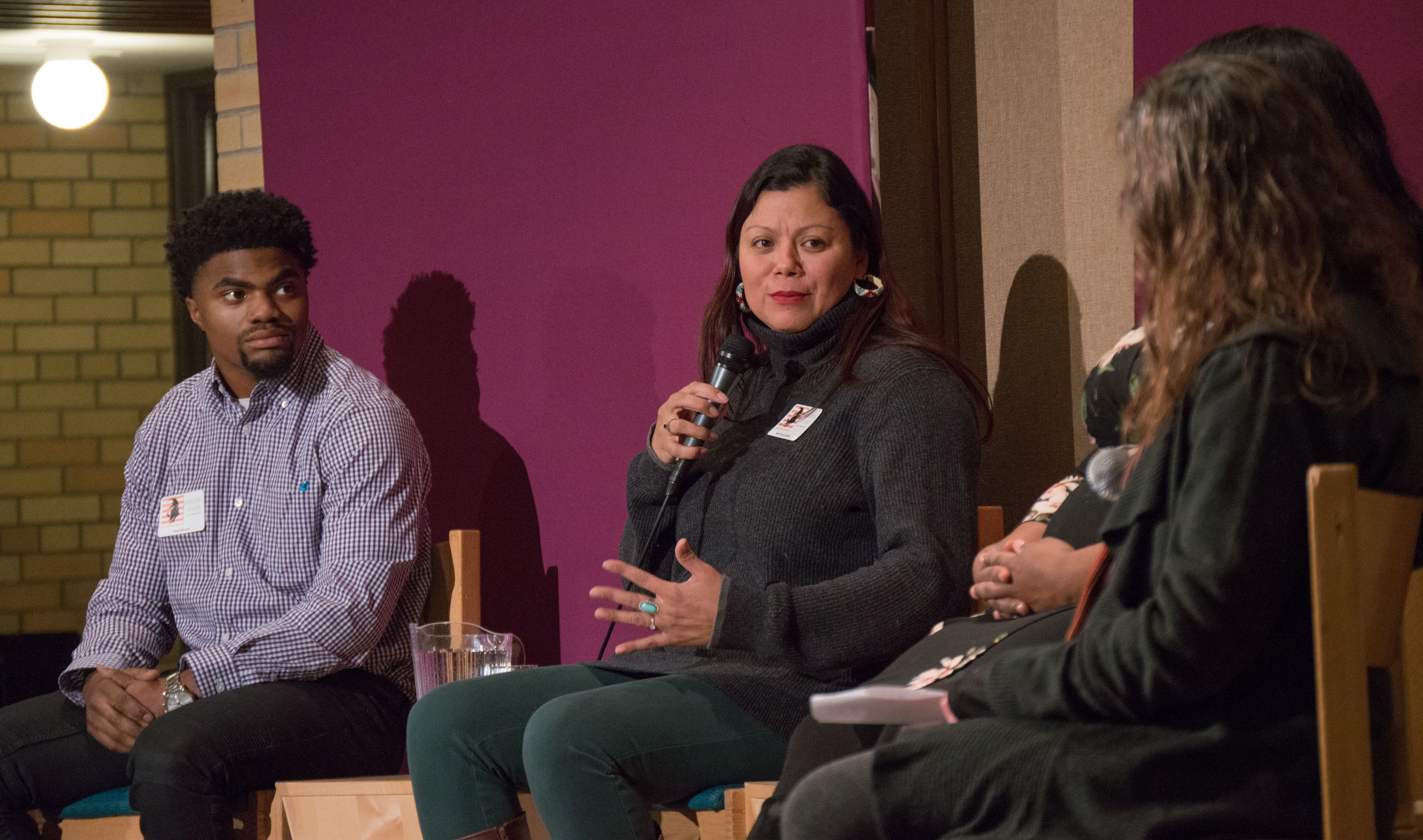 Students, faculty, and community members gathered at Concordia College on Monday, Jan. 15 to celebrate Martin Luther King Jr. Day. A first for the college, classes reconvened at events held throughout the day.

Last April, Student Government Association brought a motion to Faculty Senate to reconvene classes on MLK Day so it could be a day dedicated to honoring diversity and attending speeches, similar to events like Symposium and the Celebration of Student Scholarship. After an outpouring of support from both students and faculty, the motion was passed.

“The legacy of Rev. Dr. Martin Luther King is something all of us ought to not just celebrate, but study. And I mean really study, so that what we learn actually changes our knowledge and understand of others, the world and ourselves,” said Dr. Michelle Lelwica of the religion department.

Concordia brought four individuals to campus to help celebrate, educate, and create conversation about Martin Luther King Jr. The day kicked off with a chapel devoted to MLK, followed by an opening plenary session, a keynote speaker, morning and afternoon concurrent sessions, and an evening panel discussion moderated by Lelwica. There were also opportunities throughout the day to create handmade cards welcoming new Americans to the community and to walk through the Tunnel of Oppression. This year, the Tunnel was titled “A History of Oppression.”

According to Sunny Lee ‘18, the student curator for the exhibit,  the Tunnel of Oppression featured many types of oppression and was not limited to African Americans. The timeline in the tunnel ranged from the 1800s to the present.

According to Lee, the exhibit was a success.

“I’ve received comments from people saying they liked the Tunnel of Oppression this year. As the student curator, that’s all I really wanted to hear,” Lee said.

In her speech, Levy-Pounds informed listeners that racism is still present in today’s society. While slavery may not be as obvious as in the past, she notes that modern laws are written to disproportionately affect people of color, specifically citing the 13th Amendment, which says that slavery and involuntary servitude cannot exist “except as a punishment for crime whereof the party shall have been duly convicted.” Levy-Pounds said that this has “opened the door for a new kind of slavery.”

Later in the day, Dr. Robin DiAngelo took the stage to present a keynote talk titled “What it Means to be White Post Civil Rights.” DiAngelo’s area of research is in whiteness studies and critical discourse analysis, showing how whiteness is seen in in everyday life. According to DiAngelo’s personal website, she has been a consultant and trainer for over 20 years on issues of racial and social justice. She has also worked with a wide range of private, non-profit, and governmental organizations.

DiAngelo’s message was directed to white individuals and touched on racial prejudices that individuals carry and might not notice. One topic that DiAngelo discussed was how many people in power are white and/or male. During her speech, DiAngelo said that [white people] can go their entire life without coming into contact with a person of color and never be told that they are missing out on something. This hit home for Concordia students; according to data compiled in the fall of 2016, 87 percent of Concordia’s student body is white, with only 2 percent of students identifying as black.

Kailee Zabolotny ‘18, a member of the MLK Day planning committee, explained the decision to bring DiAngelo to Concordia’s campus.

“[The student planning committee] felt that having a white speaker on a predominantly white campus would allow for our majority students to connect with her. We felt that having this connection would be beneficial for the learning of students,” Zabolotny said.

Ehi Agbashi, an international student from Nigeria as well as the student co-chair of the MLK Day planning committee, had good things to say about both Levy-Pounds and DiAngelo.

“I think the speakers were awesome, in the sense that they all spoke about the same issues but from their own unique perspectives,”Agbashi said.

“Dr. Levy-Pounds and Dr. DiAngelo both challenged members of the Concordia community to wake up—to recognize, analyze, and ultimately challenge white privilege in our society, at the college, and in our minds/hearts,” Lelwica said in an email.

The night ended with a panel discussion where students heard from Levy-Pounds and DiAngelo  as well as Fred Edwards and Ruth Buffalo. Edwards is a North Dakota State University student and spoken-word artist from Minneapolis. Passionate about discussing his concerns about modern day racial discrimination, he has spoken at many colleges, high schools and middle schools in order to give his testimony of struggle and resilience. Buffalo, an educator and mother of four, was brought to Concordia’s panel to give more insight on racial discrimination. She also ran for the 2016 North Dakota Insurance Commissioner.

After kicking off the discussion with a quote from Martin Luther King Jr.,  Lelwica asked the panelists, “What do white people not understand about their race?” Each panelist was able to discuss the prompt, leading to rounds of applause from the audience as the night continued.

Lelwica was pleased with the outcome of the day’s events.

“My own sense was that those who opened themselves to learning about the issues discussed throughout the day were deeply moved by what they took in—myself included,” she said.

While this was Concordia’s first year taking the day to reconvene at MLK Day events, Lelwica, Agbashi and Zabolotny believe the day’s events to be a success and are hopeful for the future.

2018-01-25
Previous Post: Hundreds turn out for Fargo Women’s March
Next Post: Mr. Concordia pageant to be presented on Jan. 27