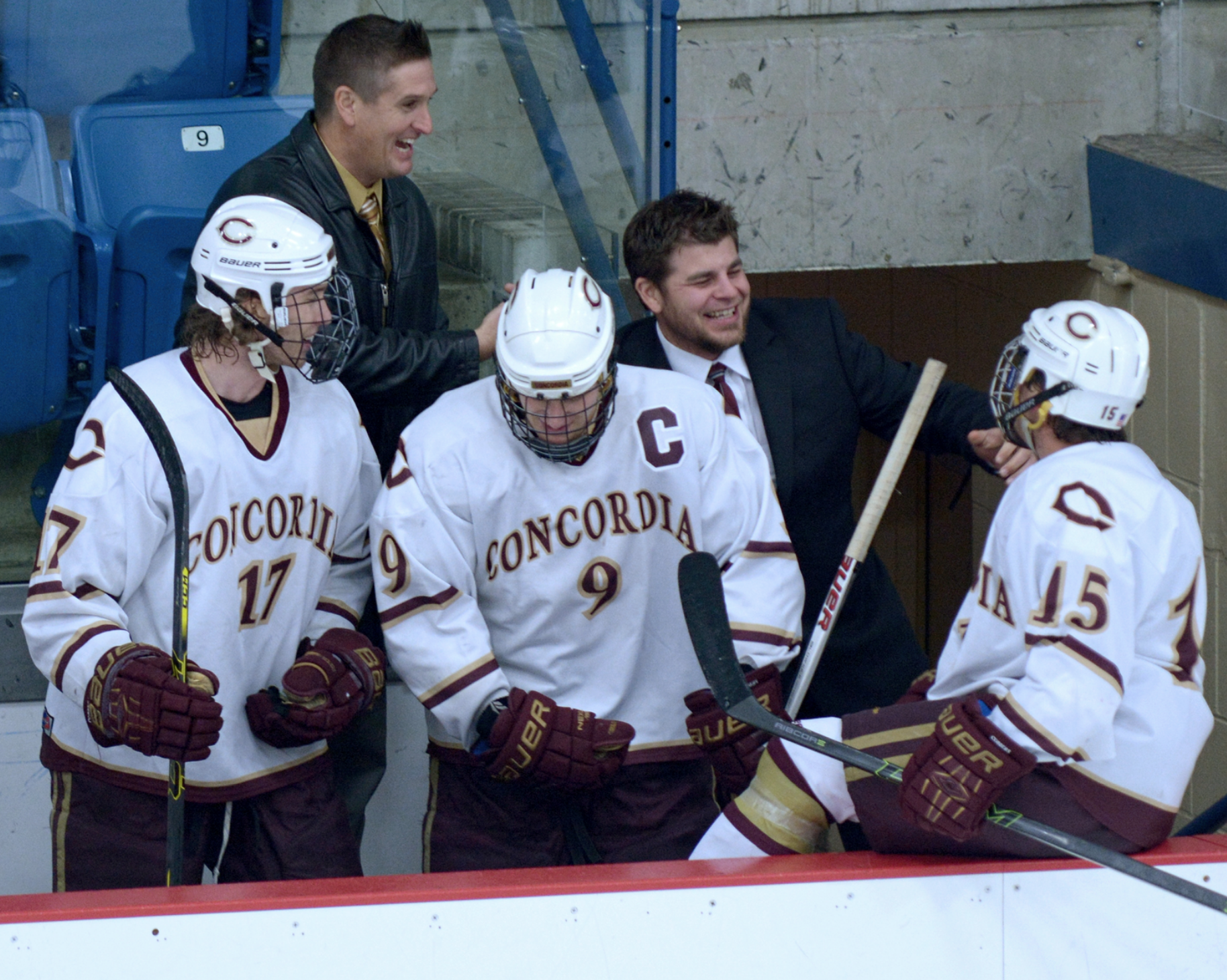 When Chris Howe took over the men’s hockey head coach position in April of 2008, the Concordia hockey program was at a low point.

During the five-year span from 2004-2008, the Cobbers finished either last or second to last in the MIAC four straight years under longtime head coach Steve Baumgartner. Baumgartner resigned after the 2007-2008 season, opening up the college’s search for a new head coach.

After a search for potential candidates, the school narrowed the field to two finalists: Howe and Dave Christian. Christian was a member of the 1980 US Olympic “Miracle on Ice” Team that won a gold medal in Lake Placid, New York and is a Moorhead resident. In the end, the school went with the young Howe as its third head coach since the 1968-1969 season.

Howe had been the top assistant coach at St. John’s for five seasons before being coming Concordia. He also spent time assisting at St. Cloud Apollo High School and St. Cloud State.

“I was excited being 31 years old and knowing the history of the program and the area,” Howe said. “I looked at it as just a wonderful opportunity to come in here, make an impact, and bring the program back to where it was before. It was excitement, but it wasn’t an easy decision coming from the power of St. John’s, where we were winning every year. If you don’t take a risk and are willing to get out of your comfort zone, you aren’t going to grow.”

Former athletic director Larry Papenfuss said at the time that Howe’s reputation as a recruiter, which he earned while acting as an assistant at St. John’s, made the difference in the decision to hire him.

“Our number one goal in all of our searches is to find someone with good character,” Papenfuss said at a press conference announcing Howe’s hiring. “Dave [Christian] is a fine person, and would have fit in well with our staff. But certainly a top priority for us was recruiting. Chris is someone with a lot of energy and passion for the players and the game.”

During his introductory press conference, Howe noted his ability in the recruiting game.

“When I came here [to interview] I told Larry [Papenfuss] this is the best-kept secret in the MIAC,” said Howe. “I may not be a household name up here. But people in the hockey community know who I am. We are going to work very hard.”

Flash forward a decade, and head coach Chris Howe has turned the Concordia hockey program around.

After a tough first season in 2008-2009, the Cobbers have steadily moved up the MIAC standings each year and have become perennial playoff contenders. Concordia has made the playoffs each of the last five seasons, and it is currently in the fourth of five playoff spots with six games remaining this season.

On Jan. 12, an overtime snipe from Dalton Mills secured a 5-4 win for the Cobbers at Moorhead Sports Center. The victory marked Howe’s 100th behind the Concordia bench in Howe’s 249th game as a Cobber head coach.

“The first thing I thought about was how grateful I was for those original guys,” Howe said. “These are guys that took a chance when the program had a rough year the year before. They took a chance with a young coach, knowing that they were going to take some lumps, and helped to build the program that we have here today.”

Not only has Howe turned the program around in the wins column, he has also brought the recruiting prowess that Concordia was looking for when they hired him ten years ago.

“He’s always positive,” freshman forward Zak Lambrecht said. “He’s passionate about hockey, but even when you make mistakes he’s there to build you up, not tear you down.”

Coach Howe picked up win No. 101 last Saturday in St. Cloud against St. John’s, less than 24 hours after a 9-1 drubbing at the hands of the Johnnies. He and the Cobbers will look to further their push for a MIAC playoff spot when they take on the visiting St. Thomas Tommies, another perennial MIAC contender, at home this weekend.

Concordia will finish out the year with a trip to St. Peter for a series with Gustavus and a season-ending series at home against Augsburg, a team that has flirted with national ranking much of the year. On ending the year against some of the best the MIAC has to offer, Howe was optimistic.

The Tommies come into the weekend in the fifth and final playoff spot with 16 points, one point behind fourth-place Concordia. St. Thomas does have two games in hand, but a head-to-head series provides the Cobbers with a chance to distance themselves from the rest of the pack. If everything swings their way this weekend, the Cobbers could be as many as 12 points clear of missing the playoffs by Saturday night.

Both games this weekend will take place at the Moorhead Sports Center. Puck drop for this Friday night’s game will be at 7 p.m.. and the Saturday afternoon matchup will begin at 2 p.m.