Students weigh in on plate waste 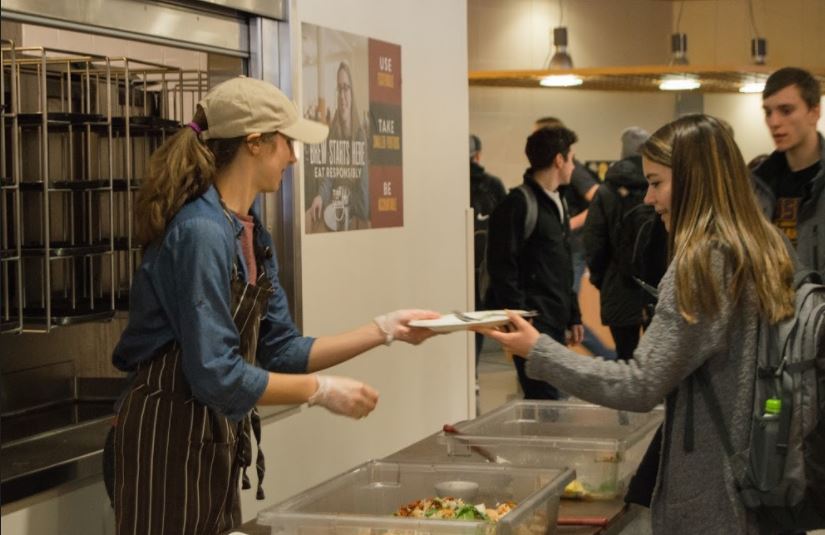 If you had lunch in Anderson Commons between 11:30 a.m. and 1:30 p.m. on Wednesday, Jan. 24, you likely encountered a large scale in the middle of the dining center with students lined up to scrape their plates into bins. When completely filled, the bins were placed on the scale to measure the food being wasted. By the end of the lunch rush, the bins weighed in at roughly 50 pounds of food scraps.

This weigh-in was just one of the events hosted by Taste Not Waste during Plate Waste Awareness Week, which ran from Jan. 22-26.

Taste Not Waste, a campaign to reduce plate waste at Concordia, began in the fall of 2016 as a collaborative effort between Dr. Joan Kopperud of the English department and Dr. Meredith Wagner in nutrition and dietetics. That November, President Craft announced Concordia’s goal to reduce 50 percent of plate waste by 2020.

In order to have a quantitative starting point, a plate-waste study was conducted that fall, weighing the food remaining on patron’s plates after the plates reached the dishroom. Benchmark plate-waste studies were conducted every semester after, with the most recent study in October of 2017 showing a 15 percent reduction in plate waste in the first year.

While Taste Not Waste is seeing progress at Concordia, there is still much work to be done before their goal is reached. Senior Austin Rund, a student manager in Anderson Commons, witnesses much of the food wasted every week.

“In the dish room, you’ll see whole slices of pizza, whole sandwiches that have been made and never touched, whole apples and bananas, oranges that haven’t been eaten or taken a bite out of, so there’s definitely a lot that gets thrown out, that is like, ‘Why did you even take it in the first place if you’re not going to eat it?’” he said.

While students were surprised to see a scale and bins of food scraps where they would usually place their plates and walk away, many expressed support for the cause.

Scraping her plate during the weighing event made sophomore Claire Beatriz think more about her meal.

“I don’t know why I didn’t eat those two noodles. I just realized it was two noodles, and it didn’t weigh much, but it did contribute just a tiny, tiny bit,” she said.

Freshman Nate Symens also had thoughts after dumping his food waste into the bins.

“It shows people all the food they [waste], because you can throw stats on whatever door you walk in and you’ll just brush past them, but really measuring up all the food that’s wasted at the end of the day—that’s more powerful,” he said.

Wagner agrees that actually seeing the amount of food they are wasting will impact students more than any statistic.

“They don’t see accumulation, because the average plate waste is around two ounce. That’s not a substantial amount,” she said. “When you see those tubs of edible food getting disposed of, it has an impact … taking part in those plate waste studies and actually seeing that food accumulate, it stays with you.”

It is important to keep in mind that the food waste weighed is only that which is edible and comes directly from patron’s plates.

“It doesn’t include obviously any paper products, or banana peels, or chicken bones. So this is all edible food that could go towards nourishing someone’s body that is now being discarded,” Wagner explained.

“I would say [Taste Not Waste] has probably been effective, because I think a lot of people are like me, where they don’t want to be seen wasting heaps of food, and we keep ourselves in check through positive peer pressure,” he said.

However, Wagner wants to make sure that students never feel embarrassed or obligated during the campaign.

“We just want people to be more mindful about what they’re consuming, what they’re taking,” she said. “It’s not a clean-your plate-club. From a nutrition standpoint I would never be behind that. It’s not about guilting or shaming anyone. It really is just thinking about what you take.”

Angelica Anderson, a senior nutrition and dietetics major and the campaign coordinator for Taste Not Waste, helped plan the week’s events. On Monday, Jan. 22, dietetics interns stood in Anderson Commons handing out Ecotensils, biodegradable food sampling tools located by almost every food station that encourage students to try food to make sure they would eat it before taking a serving.

“They’re there if you want to use them. For a long time it seemed like students weren’t aware of them. You’re in Anderson Commons, a huge facility, and then there’s this little cup of these little Ecotensils. So, I think students just didn’t quite understand what they were or how to use them,” Wagner said.

On Friday, Anderson set up a table in the dining center to answer students’ questions and give away educational and marketing resources. She hopes that the week’s events will change students’ perceptions of Taste Not Waste.

“Don’t think of it as a sticker campaign,” she said. “I know I’ve heard that said before, which is fine, but I think we have to take it a step further and we actually have to recognize that there is a whole problem behind this and we are responsible for fixing it, as a collective.”

The next benchmark plate waste study is being scheduled for the end of March or early April. An environmental nutrition class will collect all plate waste over a two-day period and calculate the average amounts

“That serves sort of our data to keep on track so we can see, ‘Was there a reduction?’, and if so, by how much?” Wagner said.

Wagner is challenging students to take responsibility in the campaign for themselves.

“We want this to be led by students, because it’s predominantly students who can make the difference,” she said.