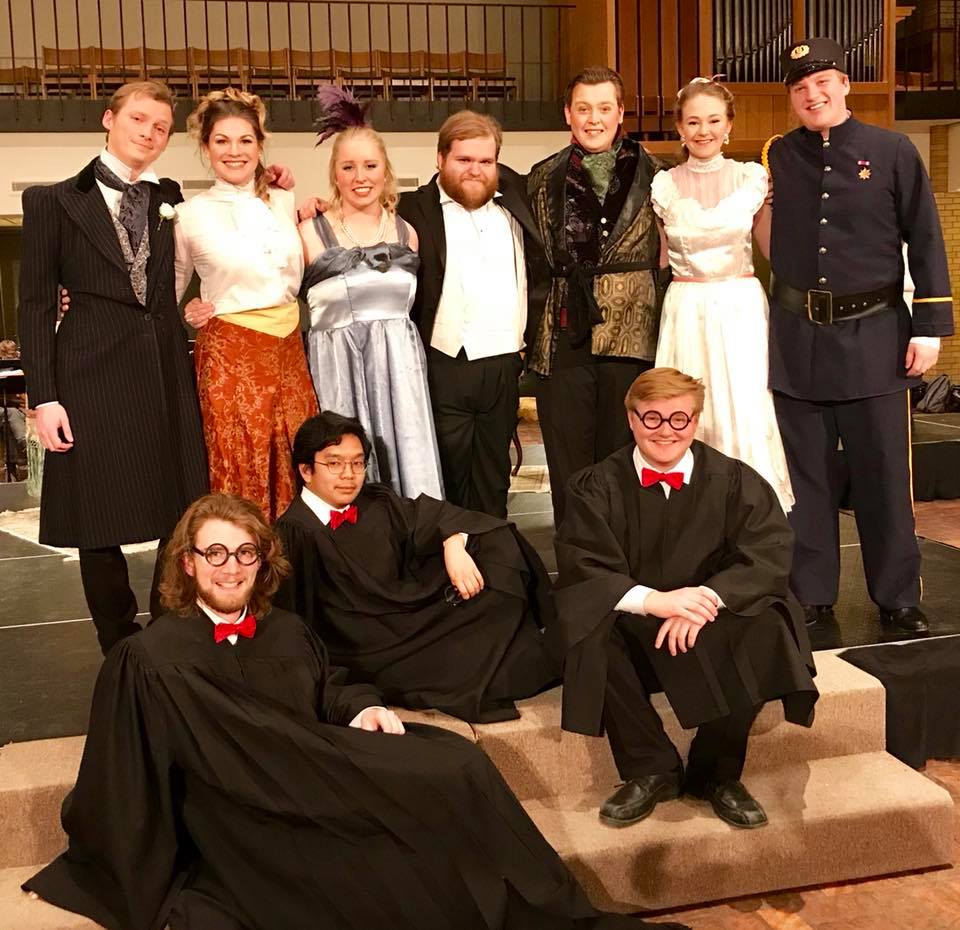 Walking by the Centrum on Tuesday, Jan. 30, one could hear a sound never heard before on Concordia’s campus: the sound of a student-performed opera, backed by orchestra.

Performing the first act of Johann Strauss’ “Die Fledermaus,” Concordia students sang and acted alongside the Concordia Orchestra. Music professors David Hamilton and Lucy Thrasher produced the opera, aided by professor and accompanist Stephen Sulich and Dr. Kevin Sütterlin serving as music directors and Fred Heringes as the guest stage director. While the future of opera at Concordia is unclear, the response to this year’s production was positive.

“Die Fledermaus” is a comedic opera premiered in 1874 by Johann Strauss. It follows the story of a dysfunctional husband and wife on New Year’s Eve, when the husband is supposed to go to jail but decides to attend a ball instead. His wife, who is being wooed by a famous singer, decides to follow him. Over the course of the night, chaos and antics ensue, but the characters all finish with a happy ending.

For many years, there has been an opera scenes class offered once a year with a performance at the end of the semester, but a full act of an opera had never been done at Concordia. Despite interest in opera from students and faculty alike, until this year it was difficult to put all the pieces together.

“The reason we’ve never done any stage-accompanied opera is for a couple reasons,” Thrasher said. “We don’t have a place to do it. The Centrum worked really quite well, but we looked around to try and figure out what we could do in the spaces there are. The main reason is that we needed buy-in from the orchestra. And so that is what changed, from doing the opera scenes to doing an opera.”

Sulich, in addition to leading opera workshops at Concordia, also has extensive operatic background. He has experience across the United States in directing and conducting, and agrees with Thrasher.

“There’s always been a need to produce opera here, but space and scheduling is always a challenge,” Sulich said. “Dr. Sütterlin felt that the players should experience live theater playing, whether it was opera or operetta. Several students from Concordia have played for me at the Fargo-Moorhead Opera and have appreciated the experience.”

Paz, a sophomore majoring in heritage and museum studies and minoring in German, played the role of a lawyer in “Die Fledermaus.”

“I auditioned for ‘Die Fledermaus’ because it’s my favorite opera,” he said. “It was the first opera I’d ever seen in its entirety.”.

From auditions to the final performance, pulling the show together took nearly a year. Auditions took place last spring, the Orchestra programmed the overture to “Die Fledermaus” in the fall, and performed it a second time at the opera on Jan. 30.

“For the future, we almost have to start planning now. You have to book the spaces, make sure that there are no other events going on, and work with other staff,” Thrasher said.

Singers began their training in the fall, with two-hour rehearsals two nights a week. They were forced to pause during the Christmas Concert season, but rehearsals started up again after winter break.

“Our first real run-through was Sunday night, with a final dress rehearsal Monday, and the performance on Tuesday. Time in the Centrum was limited, and the production team did their best to use all the time effectively,” said Sulich.

Paz emphasized the importance of the final dress rehearsals.

“Doing a full-costume rehearsal was probably the biggest thing,” he said. “You’re finally in the character’s clothing, and it really gets you into character.”

Though “Die Fledermaus” was well received, performing in front of a nearly full Centrum to laughter and applause, the future of the program remains uncertain. Both Thrasher and Sulich want to see the program continue, yet it is not without challenges of its own.

“It takes a village. It takes a huge amount of people to put this together, and collaboration is the name of the game,” Thrasher said.

But the experience that it provides to students is well worth the effort.

“Performing a fully staged, fully costumed, fully realized production with orchestra is a different level of experience, and I only hope that we are able to continue this process and are supported by the college and faculty,” Sulich said.