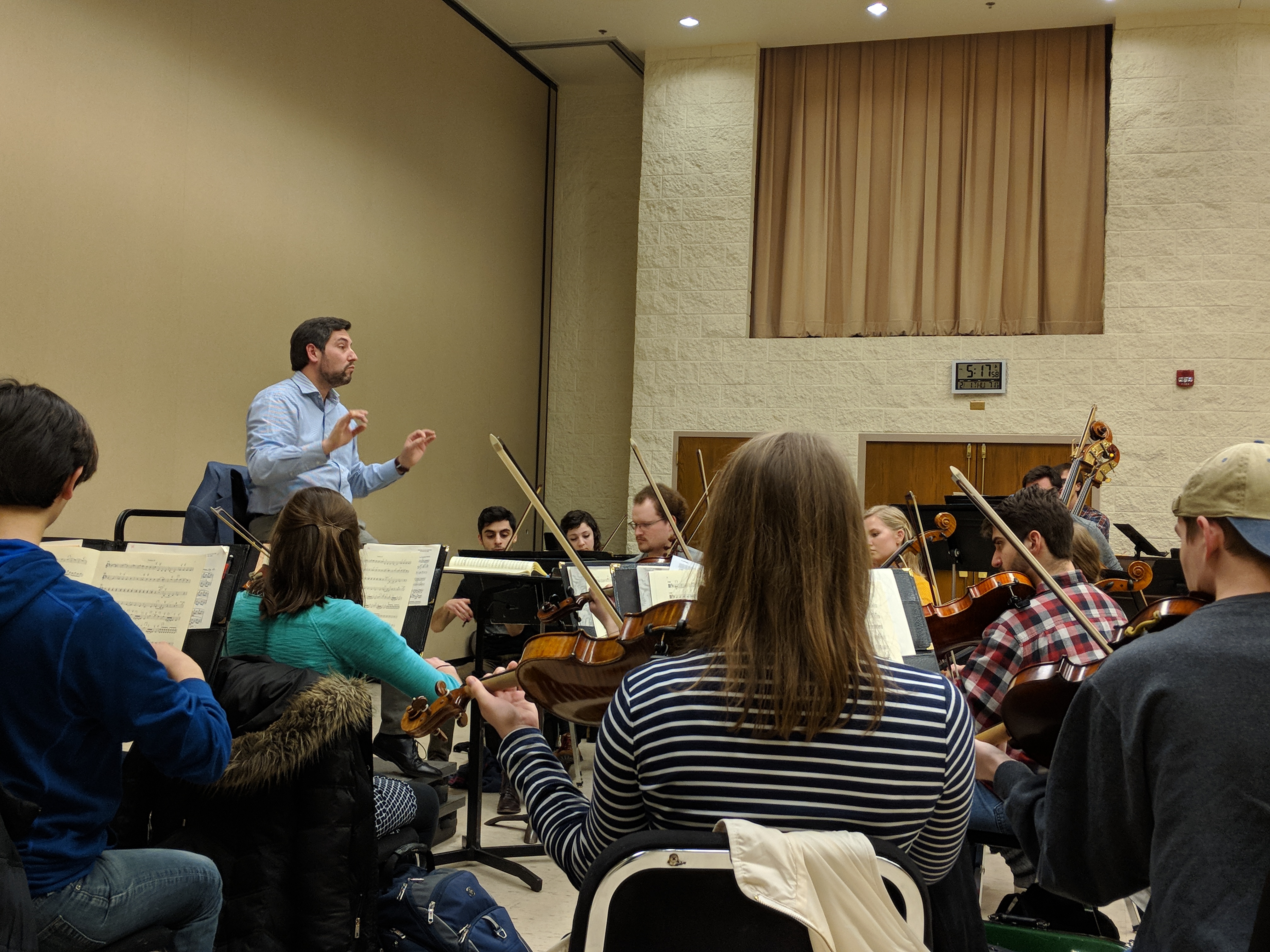 The Concordia Orchestra welcomed guest conductor Dr. Mathias Elmer from the University of Memphis to campus last week. Over the course of five days, he taught master classes, conducted rehearsals, and conducted a concert with the orchestra. Hosting Elmer allowed the orchestra to experience a different style of conducting and learn new ways of expression.

Elmer’s visit was arranged by Dr. Kevin Sütterlin, director of the Concordia Orchestra. The two have been friends for a decade, first meeting in Lucerne, Switzerland, where they both studied conducting. After that, they both studied at the University of Memphis, earning their doctoral degrees in orchestral conducting. Currently, Elmer is the director of orchestral activities at the University of Memphis.

“It’s wonderful, a great opportunity for me,” Elmer said. “I think it’s important to work with other colleges and specialties.”

When inviting guests to work with the orchestra, Sütterlin ensures that students have the opportunity to learn—and not just about music.

“By exposing my students to experts in different fields and from varying backgrounds, I hope to ensure a well-rounded and multi-faceted education,” he said. “The orchestra students will have worked with a variety of professionals from different countries and of different cultural backgrounds, genders, and sexual orientations. I try to think as globally as possible when making guest invitations, and try to provide my students with professional networking opportunities.”

John Rose, a Concordia junior majoring in violin performance, had the opportunity to learn from Elmer in rehearsal during the week.

“He’s a great person. It was really a privilege to work with him,” Rose said. “He’s always very quick and very clear. It was crazy to see how much he could hear while we were playing. He would stop us and then have so much to say to individual people.”

In addition to leading masterclasses and rehearsals, Elmer was also able to hold a lecture. He has conducted in-depth research on historically informed performance and conducting and was able to share that research with Concordia students.

“He is an incredible asset in terms of historically informed performance practice, and specifically the Austrian/German repertoire,” Sütterlin said. “He is incredibly humble, very knowledgeable, has one of the sharpest ears I have ever encountered, and in my opinion serves as the perfect role model for students: the humble musician who tries to research and find out as much as possible about how a certain piece of music was conceived by the composer, and then try to come as close as possible in their own interpretation.”

New interpretations and variety of musical expression are just a few of the advantages of hosting a guest conductor.

“Seeing the differences in interpretation, it’s a test to us, as the orchestra, to see if we can portray exactly what the conductor wants, what the music wants. It’s really interesting,” Rose said.

For Elmer, being able to not only talk, but actually work with the students was a highlight of the week.

“My favorite part is the opportunity to work with students. Not just talk, but to work with them in rehearsal and classes. I think that’s the most important thing, to give them a different view that they don’t think about often,” he said.

The fresh perspective seems to be popular with those who collaborate with a guest conductor, as Sütterlin agrees with both Rose and Elmer.

“I love to see the interactions between the guests and my students as well as my colleagues. It is a great way to broaden your international professional network. It is also always refreshing to get a new view on things from someone who comes in from the outside,” Sütterlin said.