By: Brittney Vance
In: Events, Variety
With: 0 Comments 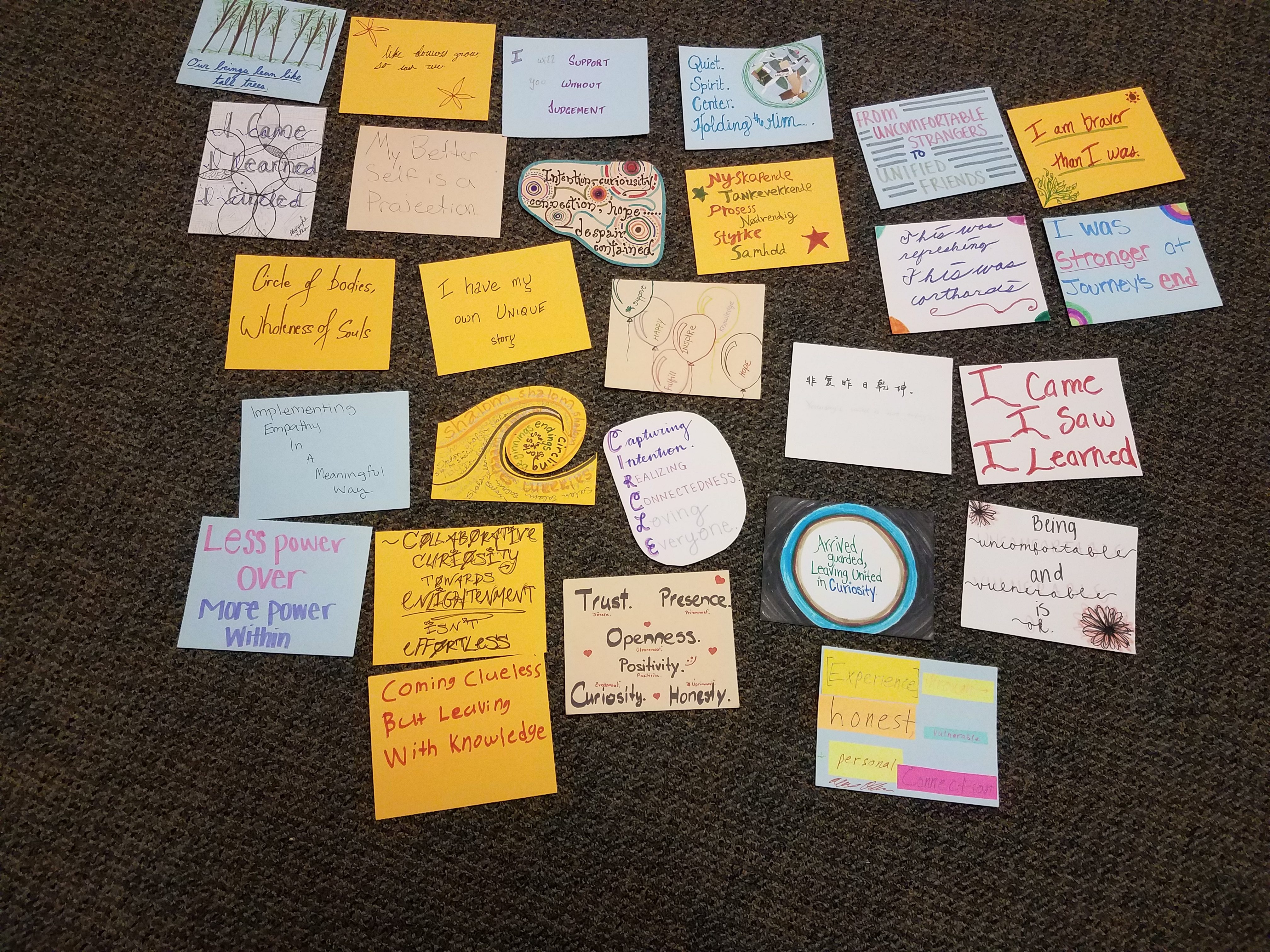 Helping students become responsibly engaged in the world is ingrained in the mission of Concordia College. Recently, Amena Chaudhry, the diversity coordinator for student support services, pioneered a training program to do just that. This training was to teach students how to become Circle Keepers.

Circle Keeper training was held at the Rustic Oaks Lodge in Moorhead from Jan. 26-28. Students attended the retreat to learn the values of the circle process, a form of dialogue used to harbor respect and peace. Lisa Smith, a well-known advocate for circle processes, lent her expertise to the group during the event.

Chaudhry created the event to start instilling the values and skills of the circle process to attendees of the event.

“The purpose of a talking circle is to create human connections and relationships,” she said.

The circle process is a form of dialogue wherein participants, sitting in a circle, are all considered of equal importance. It can be used in a variety of ways: conflict resolution, decision making, restorative justice, or just speaking about a difficult topic in a context similar to the ongoing campus forums. Each person in the circle gets a chance to speak about the chosen topic but are also given the opportunity to remain silent to show they are prioritizing listening over speaking if they feel they do not have anything productive to say.

A Circle Keeper is responsible for facilitating the process and setting a tone of openness and respect for all participants.

“The Circle Keeper is a caretaker, not a leader, of the process,” Chaudhry said. “They have the responsibility of keeping the circles open so dialogue can happen.”

Participants in the training were able to go beyond theoretical learning and apply their new knowledge in a circle setting. Many of the activities and discussions took place in a circle of chairs centered around a blue mat.

“The difficulty in talking about the circle process is that it’s not theory, it’s a practice,” Chaudhry said.

The mat in the center served a variety of purposes. It acted as a reflection tool, as well as a source of energy. Participants were able to lay an item that holds significance to them on the mat, serving as a visual reminder for people to act respectfully toward others in the group.

“The center is like a fire,” Chaudhry said. “A fire is where energy resides, and the items hold that same energy.”

Smith brought a container of 30 rocks from her personal collection. Michaela Myhrer, an education major who attended the training, brought a book titled “Staggerford” to place on the mat.

“It’s about a bad teacher,” Myhrer said. “My dad had to read it in college, and he gave it to me when I told him I wanted to be an ed major. I did the training partly to become a better teacher, so it made sense to bring it.”

Other activities were held in other rooms of the building, sometimes in small groups.

“I really liked the small group stuff,” Myhrer said. “It was a good way to practice what we were learning, because it was a lot of information and it let us reaffirm what we learned and use the skills.”

One such activity involved creating a mock roommate agreement, where students talked about what made them uncomfortable, their habits, and what was acceptable or not to them.

“The roommate agreement activity was really useful for a real-life example,” Myhrer said. “Doing it with a circle really emphasized accepting people and adapting to create a comfortable environment.”

“I’ve worked with Amena before, and I jumped on the opportunity when I found out about it,” Zeiher said.

At the end of the training, the attendees wrote and decorated six-word memoirs about their experience at the training. They then gave these memoirs to Chaudhry and were handed one of Smith’s rocks in return.

“It was a really powerful moment,” Chaudhry said. “Some of the attendees were in tears from it.”

Zeiher received one of Smith’s rocks and agreed that the experience was memorable.

“It reminds me of this whole experience,” she said. “It’s meaningful because it was given as a talking piece, and it’s connected to the earth so holding it has a feeling of being grounded.”

Chaudhry used the memoirs to create a bulletin board that now hangs outside her office in the Parke Student Leadership Center, available for anyone to look at.

Chaudhry plans to hold another Circle Keeper training in October, and all are welcome. She hopes that the training is attended by prospective Circle Keepers as well as students who attended the first training and hopes to hold an intermediate level training for returning students. The goal of the intermediate training would be to learn how to use circle process skills in conflict resolution situations.

“I’m excited we get to go again,” Myhrer said. “I’m hoping it will be more in-depth and build off of what we already learned.”

Chaudhry is also looking forward to the fall training.

“The mission statement of Concordia is to influence the affairs of the world,” she said. “With the circle process, students will learn the skills needed to bridge gaps of social distance and prioritize being in community over particular strategies and desires.”

2018-02-15
Previous Post: Ross’s Four Point Play: A look at the word of NBA basketball
Next Post: In response to the SGA meeting, Ben Shapiro, and new conservative speaker