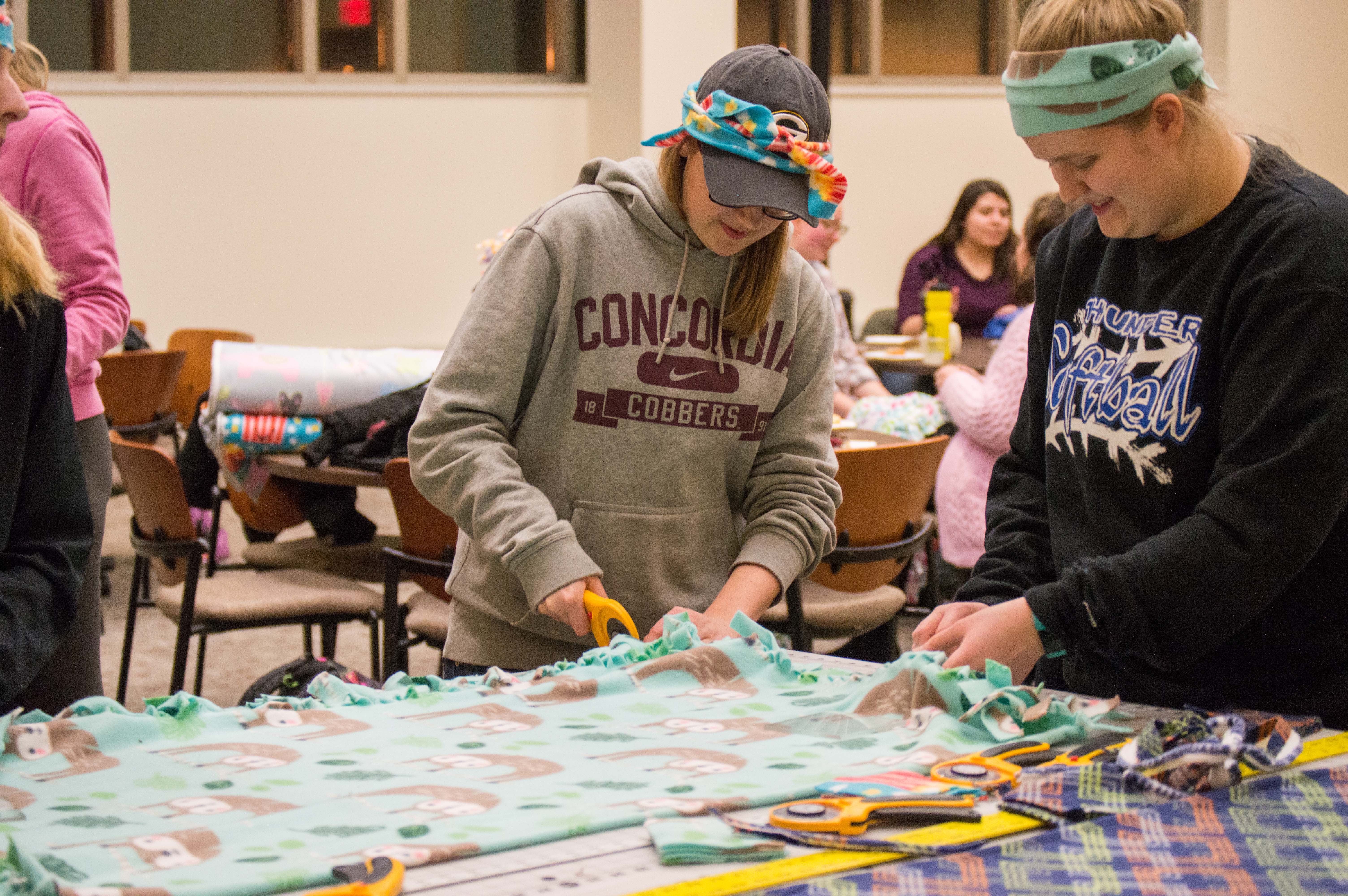 Students gathered in Barry Auditorium on Tuesday, Feb. 13, for a service opportunity to tie blankets for children ages 0-18 who are affected by illness or traumatic life events.

Campus Events Commission partnered with a nonprofit called Project Linus to host the event. According to Project Linus’s website, the organization was created after a 1995 Parade article described how much a simple blanket helped a young girl get through her leukemia treatments.

Just over 30 students showed up to make blankets and snack on Sandy’s donuts.  To kick off the event, Norene Baeth, “Blanketeer” and Project Linus chapter coordinator for eastern North Dakota, including Fargo, showed up to teach the event attendees with blanket-making supplies in tow. With six-and-a-half years of experience, Norene has helped get blankets to many children.

Sophomore Signe Johnson was one of the student volunteers present at the event.

“I think this is a great cause and I’m happy to give a minute part of my day,” she said.

While most of the blankets made go to hospitals, Baeth says that it is impossible to say where they will end up for sure, as the blankets can go to any children who are ill or traumatized. Some places that blankets have gone are fire stations, police stations, hospitals, grief camps, and sites where natural disasters and acts of violence have occured.

This year was the first year that CEC hosted the Project Linus volunteer event. This particular event has been held in the past by Students and Alumni Linked Together and Campus Service Commission. However, Hayley Broich, the leader of the service branch of CEC, mentions that after CSC disbanded, CEC added a service category to their responsibilities.

“My favorite part of the event was seeing lots of people who I don’t normally see at our other CEC events,” Broich said.

After the blankets are made, they go back to Project Linus to be inspected. Once they pass inspection, a Project Linus tag is sewn into the corner, and a tag is tacked on that tells the recipient who made their blanket.

When asked what her favorite part of her job is, Baeth looked around at the room full of college students working hard to make blankets. She simply responded, “This.”

By the end of the hour-long event, 44 blankets had been made for Project Linus children.

“It was cool to see everyone come out on a busy, cold Tuesday with such excitement for helping out with such a great cause,” Broich said.

Broich says that CEC will likely plan to host this event again, due to the turnout and positive response from attendees.