‘It takes a village’: Recruiting is a team effort for Concordia football 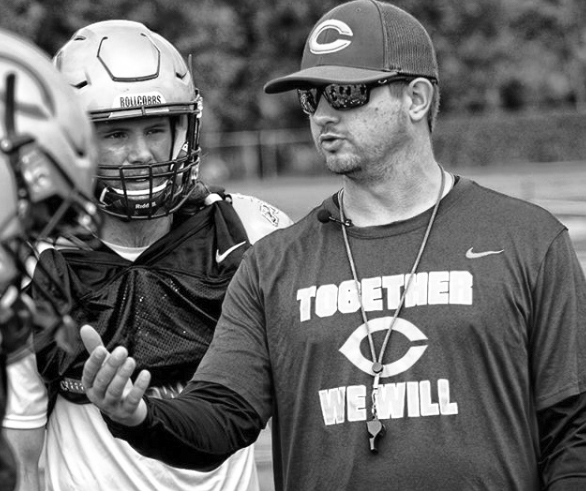 It is midnight on a cold February day and Concordia’s head football coach Terry Horan is pulling into the driveway after a long day at work. He has just spent the past few hours driving home from having dinner with a recruit in Chanhassen. Earlier in the day, he had been at Concordia visiting with recruits who were on campus. The next day, he will do the very same thing. In his 18th season as head coach, Terry Horan has recruiting down to a science, and it is paying off.

“We have 31 commitments right now. We’ve never been this high this early in the season,” Horan said.

He is not alone in the process. The four full-time football coaches at Concordia rely on everyone in the program, including players and part-time coaches, to build lasting relationships with recruits.

The recruiting process for most players begins in their junior year of high school. Current Cobber football players will recommend players they know, but each of the full-time coaches also has a territory in Minnesota they work to recruit.

Aaron Willits, Concordia’s co-offensive coordinator and co-recruiting coordinator, understands how important it is to build these types of relationships early.

“Every time that they meet you face-to-face is an opportunity for the relationship to grow a little bit deeper,” Willits said. “It gives them an opportunity to know you better and ultimately make that decision. It’s a little bit harder to say ‘no’ down the road when they’re invested in you.”

Football Preview Days are weekends when recruits can stay on campus from Sunday to Monday and figure out what it is really like to be Cobber.

On Sunday, recruits start their visit at 5 p.m. by getting a tour of the football locker room The coaches come and introduce themselves to the recruits and Horan introduces the recruits to the program. Concordia football specializes the experience by displaying Cobber jerseys in the locker room with the recruits’ high school numbers and their names on them. After they watch Concordia’s highlight video, each of the recruits gets a chance to put on their jersey and take a picture outside the locker room.

After visiting the locker rooms, recruits are brought over to Memorial Auditorium to meet their hosts, current first-year and sophomore football players living on-campus. Though players are not required to host, many do in order to help the team.

“It was a lot of fun when I was hanging out in the dorms. The upperclassmen were really nice too, and the coaches were really personal,more like friends,” Sheridan said.

Creating a personal experience for each player is something Concordia football says they strive for. After a night spent meeting current players and other recruits in the dorms, the recruits are handed over to the Admissions team on Monday morning. Ellen Halvorson, campus experience representative at Concordia, creates an individual and personalized schedule for each player. Everyone gets a tour, 15 minutes with Horan, a visit with an admissions representative, and a faculty visit.

Concordia focuses on personalized visits because they are recruiting more than just football players; they want players to be diligent students and good people as well.

From coaches who spend the extra hours to get to know the recruits, to players who make them feel welcomed, to the Admissions team who coordinates the experience, everyone is involved in recruit future Cobbers.

“It’s a grind. Obviously recruiting is,” Horan said. “You have to be really well-organized. It takes a village, and with the guys that we have doing it, we’re good at what we do.”