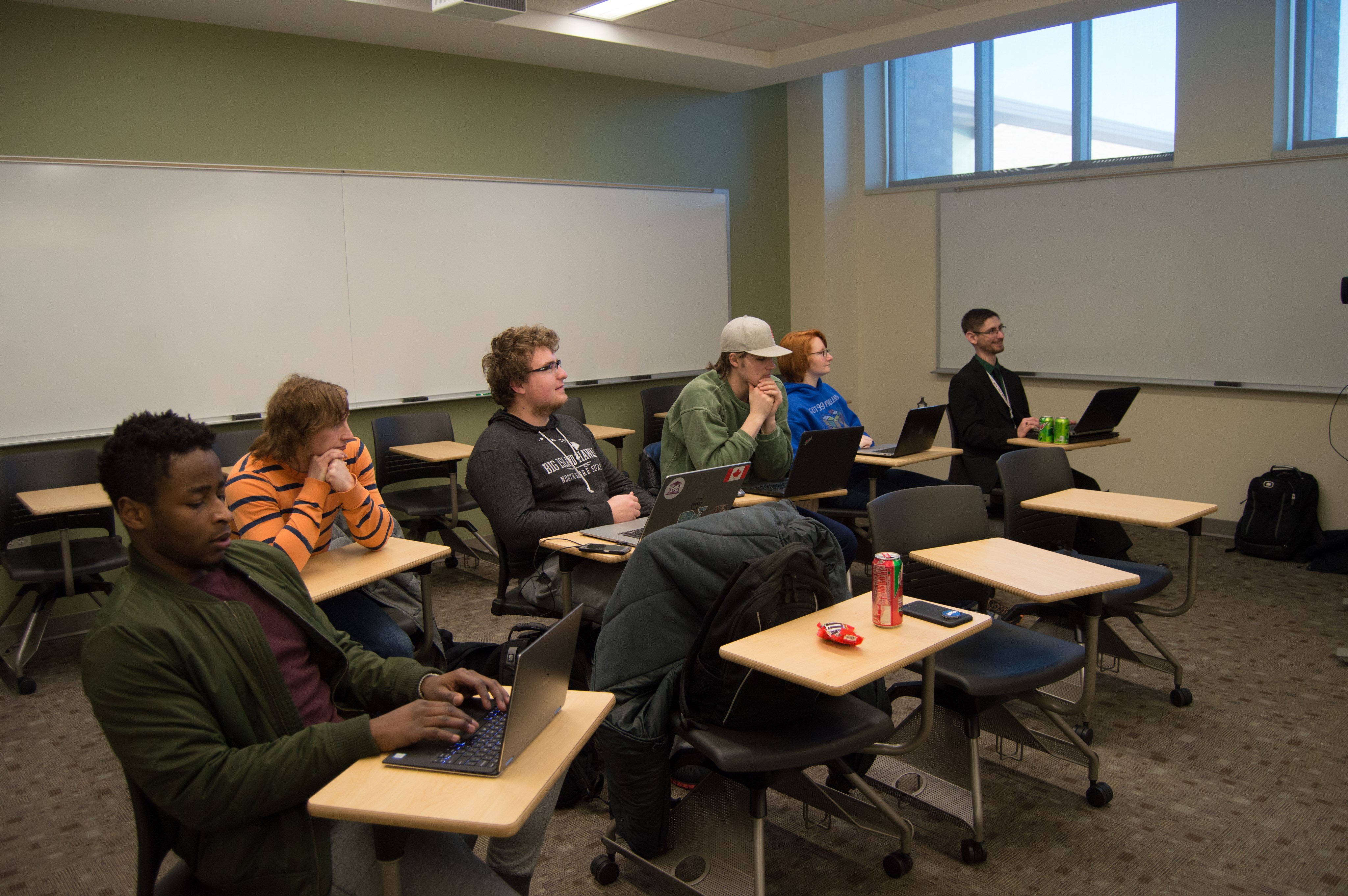 The Celebration of Student Scholarship is an event that comes and goes every year. A list of sessions is available on a dense webpage on the Concordia College website, but no information is available about specific presenters or their projects. A group of students is aiming to change that.

Eight students–Marissa Armstrong, Zach Doerring, Michael Gravley, Lane Hallock, Kyle Ronsberg, Franz Tasha, Charlie Trochill, and Blaine Tschida–along with their advisor, computer science instructor Damien Lampl, are creating an app for web, iOS, and Android to present information about COSS in a more user-friendly way. They hope to include the information that is missing from the events page: names of students presenting during a certain session, what each student is presenting on, contact information about the student, and even an interactive map for the poster sessions.

“Once it’s launched, we want students to be able to access the different events and times for who is presenting all in one package, whether that be on a web browser or a mobile app,” Tasha said.

“We want a list of events and a schedule on an app, so it’s in front of you on your phone,” he said. “We also want profiles of presenters so teachers or students who are interested in somebody’s project can get contact information.”

The students have been separated into three teams, one for each platform the app will be available on. Doerring, Tasha, and Tschida are on the web app development team; Armstrong and Trochill are on the iOS team; and Gravley, Hallock, and Ronsberg are creating the Android app. Though communication within each team is not too much of a problem, communication between the groups may present difficulties, because each team will be working independently from each other.

“Cohesion between the teams is going to be a challenge, I think,” Ronsberg said.

Trochill also thinks that communication will be one of the largest challenges the group will face with the project.

“Once we split into our separate projects, to make sure everything is on par, communication will be key,” he said. “Normally, for group projects, everybody is working on the same thing, so communication is a lot simpler to figure out.”

The idea for the project was formulated at the end of first semester this year, and it quickly spread from one idea to the eight students now involved. The plan started with Dr. Krys Strand, an associate professor for biology and the program director for neuroscience. Strand is also the director of COSS. After running into pricing issues and unfixed bugs for Android users with apps like Guidebook and ConcoLife, and limitations with formatting on the Concordia website, Strand mentioned to Lampl that she had looked into creating a new app to display the COSS schedule. Lampl suggested students create it, and the project took off from there.

“It just organically exploded,” Lampl said. “It started as an idea from one person and it grew from there.”

So far, Strand has been pleased with the work done by the group. Recently, she met with students to talk about both what she wanted from the app and what the students thought would work well. She was surprised, but excited, by some of the suggestions she got.

“One thing the students suggested was linking to social media,” Strand said. “That’s something I never would have thought of …They all bring different perspectives and ideas to the project, and that brings a lot of opportunities for creativity within the app.”

Most of the students involved heard about the project from Lampl or other students already included in the project. Not only did they all join through the same means, but they also had similar reasons for participating in the project.

“I joined partly for credit requirements to fill my transcript,” Tasha said. “But I also think the experience working with a team on such a big project will be really valuable.”

Hallock had a similar reason for joining.

“It teaches a realistic life skill,” he said. “We learn life skills in school, but nothing quite like developing an app from scratch. I haven’t done anything close to this yet in projects I’ve done, nothing so real.”

Trochill joined for experience, but also to provide service to the school.

“I think it’s really great we get to create something for the school that will be here long after I’m gone,” he said. “It’ll be cool to look back afterwards and see if they’re still using something I helped create.”

The process, however, is just starting. The group had its first official meeting in January and have held weekly meetings since. Developing an app is a long process, and several of the students are learning new coding languages for the project. Despite technical challenges and meetings just beginning, the group is still hopeful that the app will be finished in time for next year’s COSS event.

“We hope it can be implemented in 2019,” Armstrong said. “We want the bulk of the development to be done by the end of this semester.”

Feelings about the project range from nervous, to excitement, and even a little fear about the eventual outcome due to the large workload.

“It’s daunting to take this on,” Gravley said. “We learn the basis of everything in class, but now we have to combine everything into a full project. It’s a really great opportunity for students to work on a project and get ready for future careers, though.”

Tasha is also nervous and excited to work on the project.

“To be realistic, I’m nervous, I’m scared, but I’m also really excited to work with everybody working toward the same goal,” Tasha said.

This year’s Celebration of Student Scholarship will take place on April 11.