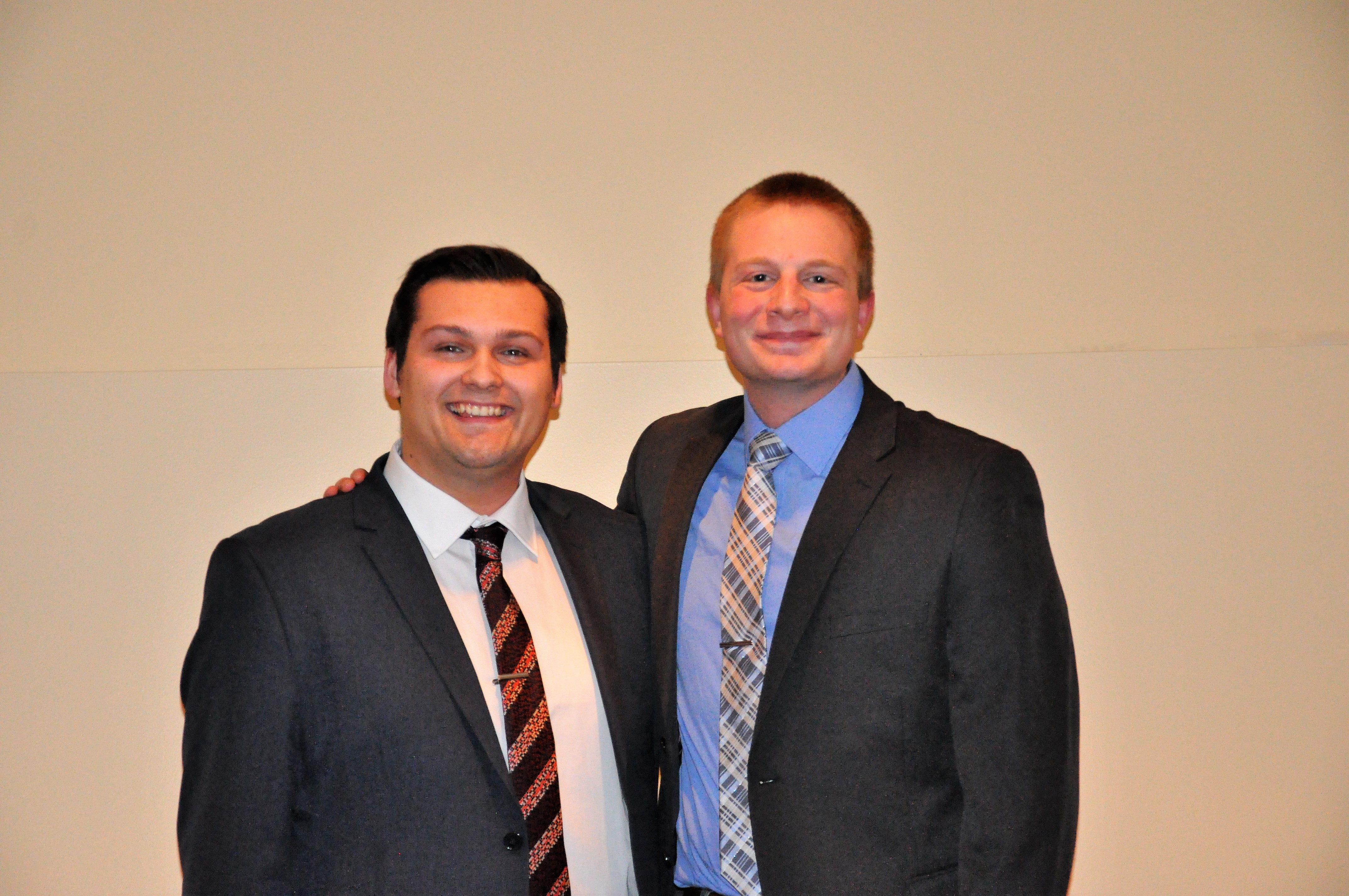 On the evening of Tuesday, Feb. 18, Concordia students gathered in The Maize, awaiting the election results for the 2018-19 academic year Student Government Association executive team. This election was very different from previous years for SGA: for the first time since 2008, an executive team ran without opposition. And so, without contest, Jacob Hanson and Keaton Erickson were named student body president and vice president, respectively.

Hanson, a junior from Blaine, Minnesota, studying psychology, chemistry, and neuroscience, began to consider running for president last year. Erickson is a junior from Carrington, North Dakota, studying biology and chemistry and has been involved in SGA since his first year at Concordia. The two met through SGA, and continued to bond when Erickson was Hanson’s TA for a chemistry lab.

Maybe you saw her “Pitch Perfect”-themed campaign posters around campus, but the newly elected sophomore representative Katelyn Jensen from Faribault, Minnesota, studying political science, sociology, and political activism, has worked to reach her position after losing in the first-year elections at the beginning of this year.

“Everyone [in SGA] was super welcoming. It’s a really supportive group. We all have the same goal and that’s to make Concordia a better place in the world,” Jensen said. “Now that I did get the sophomore class rep I’m ready to put my whole energy into it. I’m super stoked about it.”

SGA Elections Marshall Kayla Zopfi, a first-year representative this year, serves as the go-to person for candidates, plans open forums, and sends mass emails to Concordia’s student body to encourage participation in SGA. She felt the impact of the lack of participation in elections this year.

“It felt odd to be sending out an email to five people,” Zopfi said. “My dream for the student body would be to have so many people running and just to have people showing interest. And even if they weren’t elected, to continue to pursue positions and going to Senate meetings. Senate is open to the public and we really encourage people to come and input their position.”

Hanson also noticed a contrast, but did not let lack of participation affect his and Erickson’s campaign mentality.

“We still wanted to be out there. We tried to table as much as we could. We still wanted to connect with our constituents on campus and really make it meaningful. Yes, we don’t have competition but we’re also here for [the students] because we’re going to be here all of next year,” he said.

According to Erickson, fewer students in general were engaged in the campaign process this year compared to last year, especially when it came to tabling sessions in the Atrium. Not as many people approached the candidates’ tables as last year, and their conversations shifted from students challenging the tablers’ opinions to students asking for definitive policies.

“This year it seemed like people weren’t as receptive because this is what the platform was going to be next year because there wasn’t any competition. I don’t want to say that people didn’t care as much because that’s not true, but I don’t think people took as much interest in the actual platform,” he said.

However, the new president and vice president, along with Zopfi, share a vision of SGA growing along with student body intrigue and participation.

“[Engagement] shows that the student body is interested in changing things and making things better for students. Because SGA truly has a huge voice when it comes to being a liaison with the faculty and staff, [administration] listens to SGA. We create a lot of change and do real, big things on campus. And sometimes people don’t really notice, but they exist and they happen and they’re happening now,” Zopfi said.

Some of SGA’s roles can be seen in its Elections and Credentials Council, which hires the orientation, homecoming, and family weekend chairs and manages the SGA constitution and by-laws.

“It’s a council of students hiring students to do things for students,” Zopfi said.

Hanson also understands the potential of SGA at Concordia.

“While we are representing the entire student body we are also advocating for their needs and their concerns and really making sure that student voice is at the table with campus administration. I think that’s very important,” he said.

“The core mission of SGA is to represent our students as best as possible of all parties—students, faculty, and staff,” he said.

The elected executive team’s platform for the upcoming year is split into three parts: “Mental Health,” “Equity and Diversity,” and “Showcase.”

The mental health focus includes a proposal for faculty workshop training on students’ mental health in the classroom setting, as well as the initiative of a peer support group, overseen but not run by the Counseling Center and each group consisting of people dealing with the same challenges.

“[Friends] might be supportive, but they might not be able to directly empathize with you, which is what the idea behind the peer support group,” Erickson said.

The second focus, “Equity and Diversity,” is the result of a planned town hall session for next year.

“[The town halls] are aimed at hearing and listening to those minority voices and then using that feedback in our platform throughout the year,” Hanson said.

The executive team will also be working with the Diversity, Equity, and Inclusion Commission, which was started this year.

“I think we can do a lot with them next year as they get on the ground and get rolling with things. I think it’s important that we both acknowledge and realize that we are two white male students on campus and so we don’t necessarily have all the answers but we want to put the questions out there and make sure we are advocating for those minority students who maybe aren’t necessarily represented on campus,” Hanson said.

The third and final focus of their platform is simply titled “Showcase,” and the new president and vice president are hoping it will have a large impact on Concordia. “Showcase” is inspired by “Humans of New York,” a photoblog and book of street portraits and interviews collected on the streets of New York by photographer Brandon Staton. Concordia’s version will showcase a different student each week and will be published through social media, especially Instagram.

“We’re asking students to just be true to what their story is, and we want to share with the rest of the students and the rest of Concordia. We have some ideas for different themes each month,” Hanson said.

In addition to the executive team, there were eight proposed constitutional amendments voted upon in this election. All but one passed, which was moving to lower the SGA grade point average requirement of a participating full-time student from 2.5 to 2.0.

Every Senate, open forum, and town hall session is open to Concordia students and faculty, and Senate meets every other Thursday in ISC 260 at 7:30 p.m.

“It would be very, very helpful if we could get people to come to them. Those events are only going to be successful if the student body shows up and actually voices their opinion,” Erickson said.

“I want to create a more positive impact on campus. I want people to feel the same way I do at Concordia, because I feel at home. And I want everyone to have that opportunity … I want everyone to know that I’ll listen to [their] opinions and what [they] want to see changed,” she said.

“See what your fellow Cobbers are doing on campus to make that change. Voice your concerns, too. That’s a perfect time to do that,” Hanson said. “You don’t need to agree with them, but you need to respect them … If you don’t respect someone, how can you have a good dialogue conversation with them?”

You can learn more about the new SGA president and vice president by following them on Facebook or through their website, https://jhanso37.wixsite.com/vote4jakeandkeaton.