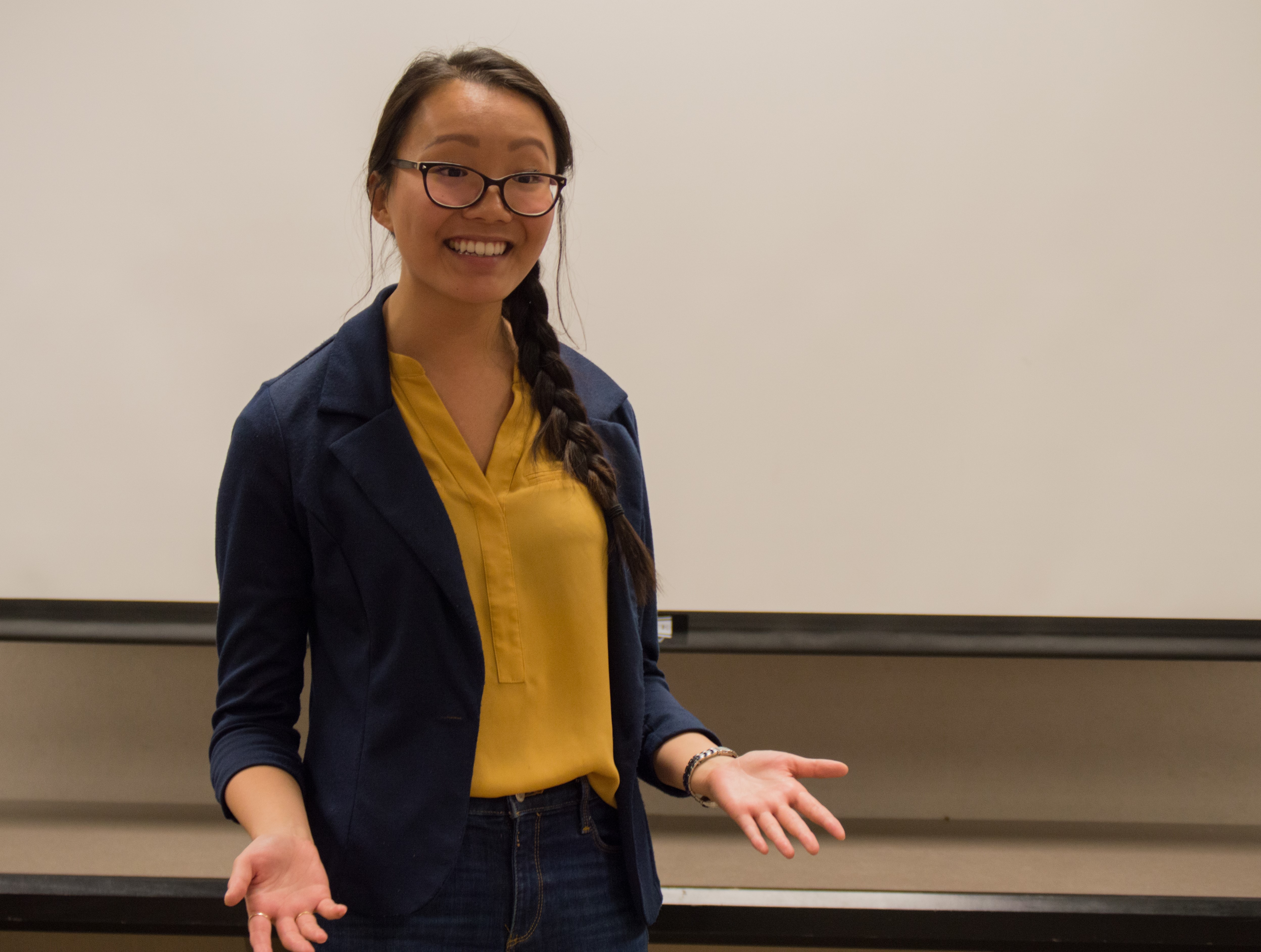 A common fact of life overlooked for generations is being brought to light by Corinne Burrell, Concordia heritage and museum studies and communications double major, through her senior thesis project, titled “The First Bloodstain.” At the Hjemkomst Center last Tuesday, March 6, a room packed with men and women of all ages came together to learn and discuss the cultural history of first periods of women in the Fargo-Moorhead area. Attendees included community members, Concordia students, and people who were interviewed for the film.

“The First Bloodstain” is a filmed oral history of menarches, the scientific term for the first menstruation a woman has, from women in the Midwest. Puberty is full of awkward moments we hate to remember, but for the project, Burrell invited women to reflect on a day they will never forget—the day they got their first period.

Burrell got the idea for the research project last spring, during her time as an intern at the Smithsonian Institution in Washington, D.C. through the study-away program Lutheran College Washington Semester. Through LCWS she was able to live, work, and study in D.C., and she decided to use some of her time to explore this mecca of museums and projects in preparation for her upcoming senior research seminar. Burrell found inspiration in Smithsonian’s National Museum of American History, in the “Modern Medicine and the Great War” exhibit.

“One of the parts of the exhibit was about feminine hygiene and how that was the springboard for pads being developed,” Burrell said. After looking at the exhibit, Burrell noted that these once innovative products looked rudimentary and wondered what impact it would have had on women to use these products.

“The First Bloodstain” seeks to fill a hole in the larger history of menarches throughout the United States.

“I found there were some gaps in the literature about the Midwest. A lot of the oral histories about menarche were eastern-coast or western-coast focused,” Burrell said.

Realizing the gap in historical research and her own curiosity, Burrell began interviewing people in the Fargo-Moorhead area. Burrell was surprised to find that women were not only willing but eager to talk about it.

“Surprisingly these women, who were aged all the way up to 92, were very forthcoming and sort of excited to talk about it because they hadn’t talked about it really, ever before,” said Burrell.

Burrell conducted video interviews with these women, aged between 15 and 92 years old, and was guided to turn this oral history into a film by Dr. Richard Chapman, professor of history and women’s and gender studies and advisor to History 410.

History 410 is one of the options for heritage and museum studies majors for their senior research seminar and includes a final historical research project, which in the past was exclusively term papers.

“Last year, I opened up the historical research to non-traditional papers,” Chapman said. Chapman encouraged Burrell to use the tool of film to allow more people to view her research and stimulate conversation over the subject matter.

Concordia senior Sunny Lee was in attendance at the screening. Lee was excited by the project and felt the unique presentation style helped make the project more informative to more people.

“By creating a video, it becomes a viewing experience for the audience as well as a learning opportunity,” Lee wrote in an email.

“I have been convinced over the years that historical research needs to take a form, a media, a venue, to reach a wider audience,”he said.

Burrell was able to reach her larger audience through the support of the Historical and Cultural Society of Clay County, where she currently interns. Matt Eidem, director of operations at HCSCC, heard about her seminar thesis from Dr. Joy Lintelman and was able to coordinate a screening and discussion of Burrell’s film in conjunction with Women’s History Month.

“One of the best resources we have in Fargo-Moorhead are students and their academic work and it is good to showcase that,” said Eidem.

While Eidem acknowledges that some older members of HCSCC have been surprised by the news of a screening about menarches, the reactions have been wholly positive and members seemed interested in bringing up the topic.

Burrell hoped that the screening of her research would instigate discussion over this still-taboo subject, and it seems to have worked.

“Listening to all the ladies talk about their experiences really shows how far we’ve come but also how far we still need to go regarding menstruation,” said Lee.

For those wondering if it is too late to watch, Burrell will be screening part of her senior seminar film at the Celebration of Student Scholarship, and has posted the full film on Youtube.