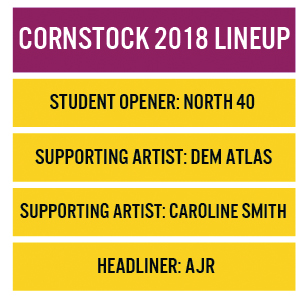 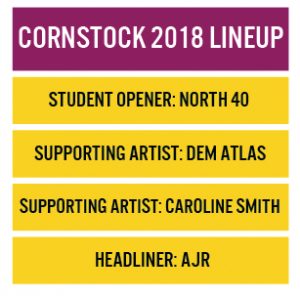 High energy and deafening cheers filled the Centrum at Battle of the Bands on Saturday, March 18. Each of the four student bands—Cobber Nation, Everybody’s Favorite Band, F.R.E.N.D.Z., and North 40—only had 12 minutes to win over the crowd and receive the contested prize of playing at Cornstock. At the end of the night, it was announced that AJR would be the headliner, with deM atlaS and Caroline Smith as supporting acts, and North 40 as the opener.

North 40 is made up of five members, with Cameron Jenson on piano, Noah Johnson on drums, Eli Simonson on guitar, Rich Gonzalez on bass, and Scott Nelson on vocals and guitar. Though they are a cohesive group, they have played together for less than a year.

“Me and Cam were roommates last year, and then we became good friends with Noah. We all knew that we enjoyed playing music, so our first time we played together was for Frosh Finale last year. Then at the start of this year, we became friends with Eli, so we added him. And then Rich came along this year too,” Nelson said.

Playing at Battle of the Bands was an event North 40 had looked forward to for a long time.

“Cornstock was a lot of fun last year and it looked like a great time playing for it, so we thought we’d give it a shot,” Nelson continued.

The competition was tough, with three other bands contending for the Cornstock opening act position. Everybody’s Favorite Band is comprised of Madi Wilts, Jill Kadrmas, Rachel Rosson, Hannah Mathes, Hannah Lindgren, and Kaiya Ruff on vocals; David Schneck on drums, Tyler Malmberg on bass, John Huebner on guitar, Jack Johnston on piano, and Thomas O’Keefe on electric violin. They focused their performance on popular pieces that are easy to sing along with, performing selections by Shania Twain, Britney Spears, and Avril Lavigne.

“Our set list is so fun. We’re performing ‘Man! I Feel Like a Woman,’ ‘Toxic,’ and ‘Sk8er Boi.’ So it’s just like, classics. It’s just so fun to sing the songs that you scream in your car with your best friends onstage,” Wilts said.

F.R.E.N.D.Z was formed from the remaining members of PG-13, last year’s student opener at Cornstock. The members are Tyler Eliason on vocals, Cory Wentland on backup vocals, Ben Maurer on drums, Johan Stenslie on piano, Eli Simonson on electric guitar, and David Holtey on bass.

“I wanted to try and get a band together to try and do it again, because it was so much fun last year,” Eliason said. “I’ve always enjoyed supporting my friends and doing Battle of the Bands, having a good time and performing rock music, from a rock band you don’t hear a lot of live.”

Cobber Nation is made up of Kristian Stenslie on vocals and guitar, Eli Simonson on guitar, David Holtey on bass, Johan Stenslie on piano and accordion, and Andrew Haarsager on drums. For them, the motivation and background is different. Developed from the larger Cobber Nation cheer squad often seen at football games, they aimed to spread Cobber spirit in a different arena.

“It’s a nice way to extend the Cobber Nation name,” Kristian Stenslie said. “Cobber Nation is kind of a fluid title, whoever shows up to a football game and paints on their chest can be a part of Cobber Nation.”

For senior Alex Samion, lead commissioner of CEC, Battle of the Bands is her favorite event to plan.

“Believe it or not, Battle of the Bands is what I look forward to the most every single year. It’s such a cool atmosphere, seeing people get excited about their peers performing for each other. So many people show up, people get super into it, they really want their bands to win,” she said.

The planning process for Cornstock begins early in the school year. CEC compiles a list of potential bands to be headliners and gets in contact with a middle agent who then reaches out to the bands. From there, it is a matter of choosing from the bands that have responded. After the headliner is chosen, CEC sends out another list with potential supporting acts, and the process repeats. For Battle of the Bands, the timeline is much shorter. A few weeks before the event, interested student bands submit a video audition, and CEC chooses which ones will play at Battle of the Bands.

Supporting act deM atlaS is a hip-hop musician from St. Paul, Minnesota. He got his start in 2013, when he signed with Rhymesayers Entertainment, a record label in Minneapolis. He has played on various tours around the US, Canada, and Europe, and has released one album, titled “DWNR.”

Caroline Smith, the second supporting act for Cornstock, is also a Minnesota native. She is originally from Detroit Lakes, but moved to Minneapolis to attend the University of Minnesota. Smith is the lead singer of a band called the Good Night Sleeps, falling under the folk/indie/pop genre. They have released four albums between 2008 and 2013.

Cornstock headliner AJR formed in 2005, when a group of brothers from New York began covering pop songs around the city. The name is an acronym of the brothers’ names—Adam, Jack, and Ryan. To create their unique sound, they mix barbershop harmonies, electronic music, and other styles. They have released three albums since 2013.

Cornstock will be held April 28 at 7:15 p.m. in Memorial Auditorium.